I’ve been saying this around the office a lot lately. I have a lunch bet with one co-worker, a $5 bet on the series with another and several bragging rights at stake depending upon the play of the Boston Celtics tonight. I realize they are leading 3-2 in this best-of-seven series, and that there is a possibility the Lakers could stretch things to a seventh game, but I don’t want it to go to Game 7. I have a feeling the NBA would like it just fine if Kobe and company came out and obliterated the Celts tonight, but I don’t think that’s going to happen. I believe, in my heart of hearts, that the Celtics are the better T-E-A-M and I really feel that they will close out the Lakers in Game 6 tonight. In fact, I’m predicting the final score to be: Celtics 98 – Lakers 95. 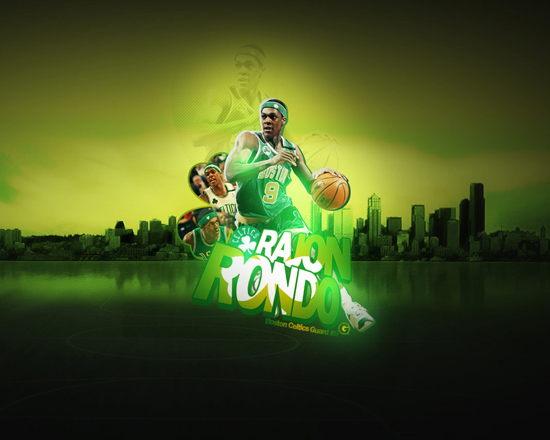 Since Rondo rhymes with Hondo, the Lakers don't stand a chance tonight.

It’s time for Ray Allen to rediscover his three-point shooting prowess and it’s definitely time for Kendrick Perkins to play like Robert Parish. Kobe is the best player, pound for pound, on either team, but he alone can’t win the title. He’ll need guys like Lamar “Double Stuff” Odom and “Ron-Ron” Artest to step up and play tough, but that hunger doesn’t seem to exist. Artest had it against Phoenix, but he hasn’t been able to channel his aggression effectively against Boston. And that’s just fine with me.

If it comes down to bench play, I feel very good about the Celtics’ chances tonight. I mean, if Glen “Big Baby” Davis, Nate Robinson and Tony Allen all play aggressively – which I know they will – the score should fall in Beantown’s favor. Lakers’ coach Phil Jackson said this is exactly the way a 2-3-2 series is supposed to go, but he’s counting on his team winning the last two games at home. That’s not the way it’s supposed to go in my book. With Celtics Coach Doc Rivers barking out orders, and the green-and-white players paying attention, I feel very confident in my team’s chances this evening. Tuesday, June 15, 2010 will mark the Celtics 18th NBA title. Pretty sweet, huh?

What about you? Care to venture a final score? Come on, Laker wannabes. How ‘bout it?


I believe the Celtics will win it all, but it’s going to be tough. The Lakers aren’t going down without a fight. It might possibly go 7 games. The last time this happen was in 2005 with the Spurs and Pistions. So, I say Celtics 97, Lakers 91.


Game 6 bench points: Celtics – 13 ; Lakers Thursday bench points 25. At one point before garbage time it was 24-0 Lakers in bench scoring..