Last night’s NBA Finals Game 4 win by the Celtics against the hard-charging Lakers made me feel good all over. Not only did it right the series at two games apiece, but it re-established the Celtics bench as a force to be reckoned with. Memories of John Havlicek, Paul Silas, Cornbread Maxwell and even Bill Walton all came crashing back to me as I watched C’s Coach Doc Rivers let both Glen “Big Baby” Davis and Nate “Little Man” Robinson stay in the game and take control in the fourth quarter. Down 62-60 entering the final quarter, the two off-the-bench subs were put in originally to spell Boston’s starters Rajon Rondo and Kevin Garnett as the green-and-white looked to get back in the driver’s seat following some recharging of their batteries. What ensued over the next nine minutes, however, was a knock-down, drag-em-out battle at both ends of the court, with Robinson stopping and popping for baskets and Davis crashing hard under the boards with as many big bodies as he could find. No matter the opponent – Ron Artest, Lamar Odom, Pau Gasol – Big Baby just leaned in and wrestled the victory away from L.A. 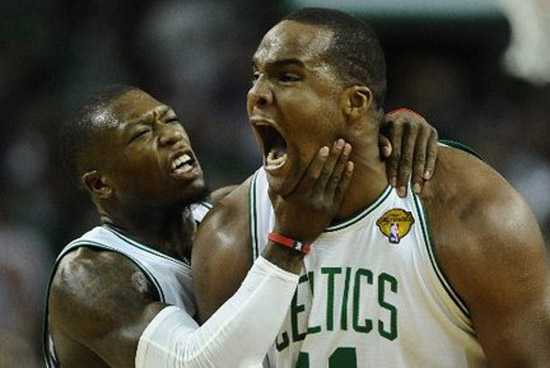 The Celtics won the game, 96-89. But the reason was because Robinson and Davis rejuvenated their teammates and flatly denied L.A.’s players to battle back. If you missed the game, you missed a doozy. In the final quarter, Davis scored nine of his 18 points while Robinson provided additional adrenalin by tossing in six of his 12 points. With 2:50 left, and the scoreboard reading 85-77 Beantown, Boston’s Big Three (Rondo, Garnett and Paul Pierce, with apologies to Ray Allen) came back into the game and closed the deal. In fact, it was Rondo’s steal and subsequent bucket of an errant pass by Kobe Bryant with 33 ticks left that made the score 92-84 and sealed the Lakers’ fate.

At the post-game press conference, Robinson and Davis shared microphone time reminiscing about their glory. At one point, Robinson chimed in that Davis is like Shrek and he’s like Shrek’s sidekick, Donkey. Needless to say, it cracked up the media members in attendance and put another unique stamp on a so far titillating series. 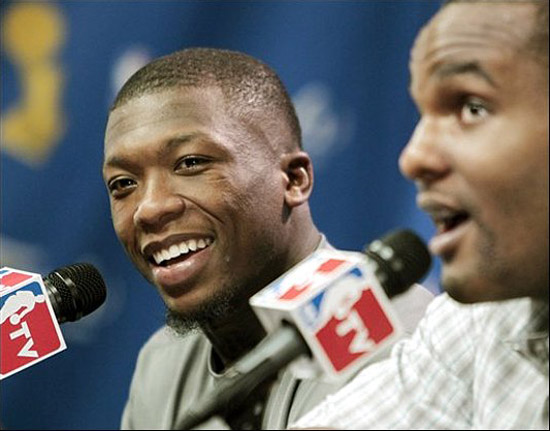 The NBA Finals stay in Boston for Game 5 on Sunday, which I predict will be a blowout by my shamrock-wearing friends. Game 6, back in L.A., should be a tight battle but – as you might suspect – I predict another victory for the Celtics, producing an outcome to match the 2008 NBA Finals. Celtics in six, baby. Celtics in six…Big Baby!


Do you let your employees drink during their lunch periods? This guy is certifiable… Lakers in 6!


It’s great to see athletes actually enjoying what they do. Loved the game, love how these guys played, love how they celebrated and loved the time with the media.


A round of shamrocks all around! Boston is gonna be rockin’.
I guess Phil doesn’t see the handwriting on the wall.