What a Difference a Year Makes

Once or twice a year I get a really great phone call from my brother. It usually starts off with him asking if I can make it up to LA either that night or the next night and after that, a tidal wave of elation hits me as I know he’s about to ask me to go to a Lakers playoff game with him.

Now it is fun to spend time with my brother and going to a playoff game is cool, but that’s not what makes the experience so awesome. He gets these seats that are just ridiculous where we sit in the first row behind the sports writers who cannot stand during the game. You are on eye level with the players throughout and it’s just a different type of experience. As a lifelong Lakers fan, this is just the best. 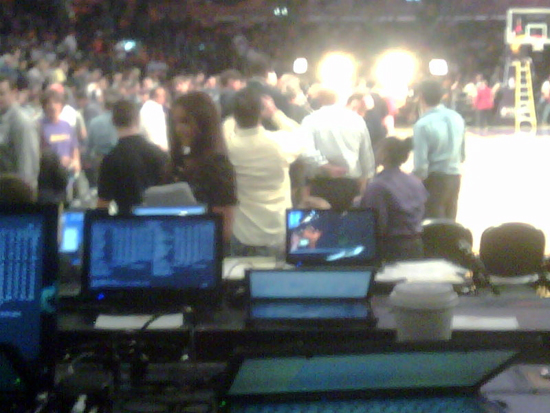 When the writers can't stand to cheer, you get a pretty darn good view of the game.

With the Lakers squaring off against the Suns, and having gone to school in Arizona, last night’s outing to the Staples Center in L.A. was a just reason to incite some fun text battles with old friends.

Here are a few excerpts:

AZ Girl: How was Amare’s dunk under the net? In your face?!

Me: Missed it, must have been looking up at the SCOREBOARD!

Me: Not if you’re a Suns fan. Never too late to come to the purple and gold.

Me: Your Eurotrash is worse than our Eurotrash. (after Sasha Vujacic and Goran Dragić got into it)

AZ Girl: Love Goran! Your Euro is a Serb!!

Me: He just Serbed Dragic!

Me: He can’t stop winning.

Me: He’s passionate, unlike boring Nash.

AZ Guy: Nash has a bigger heart than your fourth chin.

Hey, it was all in good fun. I did notice after the contest ended with a last-second Laker basket for the victory, all their text bombs stopped rather abruptly. Odd…or maybe I was just too busy celebrating to notice any that may have come in. 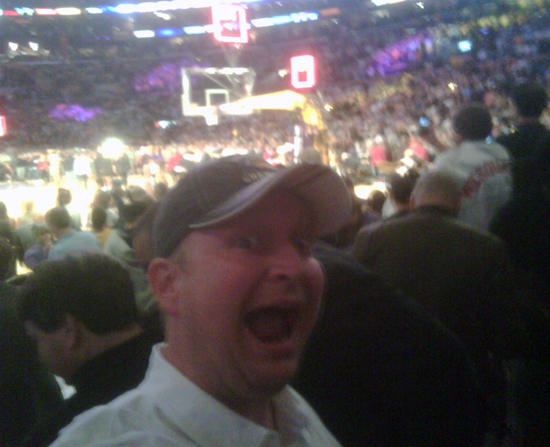 When Ron Ron made that bucket, the place went nuts, what a great moment!!!

What makes this whole experience interesting however is that the last time my brother called, it was to attend the Lakers/Rockets playoff game. That game was almost equally as memorable as the game last night, especially since it was the game where Ron Artest got right in Kobe’s face and everyone in Staples thought there was about to be a full-fledged brawl between the two stars. As Artest made that amazing last-second shot to seal the Lakers’ victory last night and Kobe ran to embrace him, I thought about that. What a difference a year makes, huh? 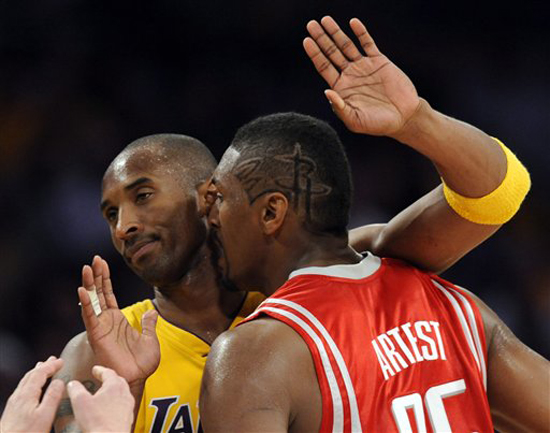 A year ago they were on the brink of killing each other... 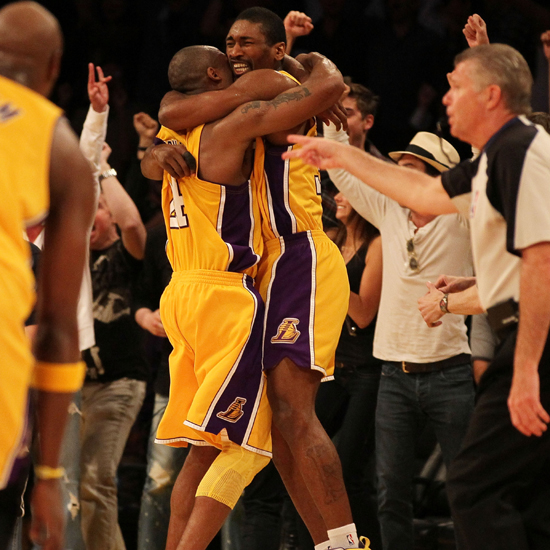 And now it's a lovefest in Lakerland!

Artest is a galvanizing character to say the least. Nobody was sure how this guy would fair in a major media market like L.A. He’s done all the right things though. He’s quirky to say the least, but as stories start to sprout about Artest giving fans his personal cell phone number, having them meeting him through Twitter and appearances like this on Jimmy Kimmel Live, it’s tough not to like the guy.

That’s why it was such a cool moment in Game 5 last night. He had not been having a good night at all, and in particular, he was not having a good fourth quarter. But there he was, when the Lakers needed him most, in the right spot, at the right time, with the world watching. You couldn’t help but feel good for him and think, “What a difference a year makes.”