Monsters may be unleashed in the upcoming Vs System® 2PCG®: Monsters Unleashed! set, but the Leviathons are the ones who are off the hook. And there is only one lady, their queen, who could (but won’t) restrain these interstellar invaders. 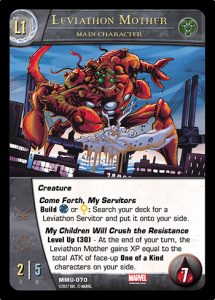 Not so tough. And yes, she is the only Main Character for this team. (She doesn’t enjoy rivals to her royal self.) And she is a proud mother indeed, yet also sort of high maintenance – she requires a Legion of Servitors to attend her. 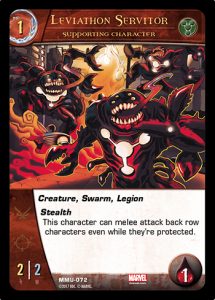 This evil majesty sends these sneaky guys to try to kill Kid Kaiju. Not kind. Use your words, Leviathon Mother! A reminder that Swarm means you can have any number of Servitors on your side at a time and Legion means you can have up to eight copies of them in your deck. Coincidentally, there are eight that come with the set! Serendipity!

But wait, back to this Mother — why does she require One of a Kind characters for her My Children Will Crush the Resistance level up power? (Remember, One of a Kind means you can only have one copy of that card in your deck.) Has Mary Walker teamed up with this universal scourge? Not quite. Each of the 20 Leviathon Supporting Characters (except the Servitors) are One of a Kind. But what happens if she does level up? Is it good for anyone? It is not. 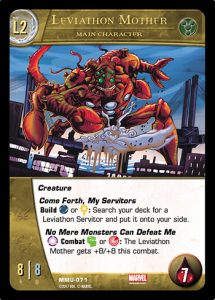 Well, there she is. And who is her most favored child? It’s this guy. 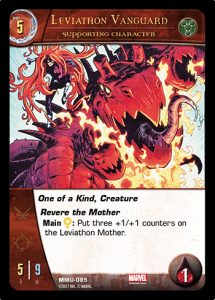 It really loves its momma. Like, an unhealthy amount. All Leviathon One of a Kinds fall into one of three categories. The first, most basic category includes this guy – “Super Powers”. (Hey, I said it was basic.) The next category we like to call “Lumbering and a Keyword”. Like this one, so named by Spider-Man himself. 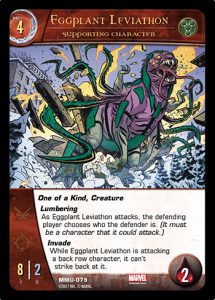 It has that new Keyword, Lumbering, which at first looks like a drawback…wait, it is a drawback. But it’s also like a huge purple Namor! The final category of horrors from this maternal nightmare is another new Keyword — “Comet Fall and Impact”. The Leviathons come to Earth like comets, hurtling through space until they land upon our planet with a gentle touch. Behold! 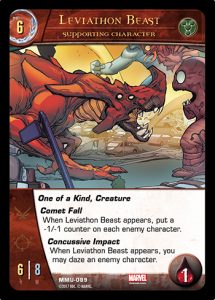 As you can see, the comet fallen also come with an “Impact” power that does something else when they appear — each one different. But what is any team, even an awful, evil team of creeps without a Plot Twist? 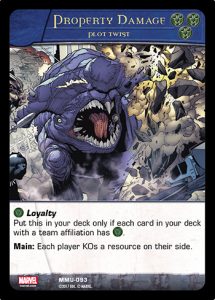 Here we have one of the Leviathons’ three loyalty Plot Twists. Yep, the Leviathon Mother demands loyalty. You can play her Supporting Characters in other decks, but not her destructive, mean Plot Twists.

Well, you may be thinking, this Main Character and her team are pretty powerful. They are, and while they can be played as is in regular decks, we are also excited to announce a brand new game mode, debuting with this set…

In this mode, two players team up with regular decks against a souped-up Leviathon deck. How does it work? Great question! You use the Free-for-all rules from Marvel Battles. The goal is to take out the Mother before she takes out both of you. There is only one additional rule, seen below:

When The Leviathon Mother plays a Location she gets one of the following effects depending on which power symbol it has:

Defend Your Mother: You may put a Leviathon team affiliated character from your hand onto your side as long as its cost is less than or equal to the number of resources you have.

The Time of Nesting is Here: Draw a card. Draw another card for each One of a Kind character on your side.

Face Me and Die: Put three +1/+1 counters on the Leviathon Mother.

This Planet Angers Me: Each enemy player chooses one of their face-up Supporting Characters and Stuns it.

The Desecrated Nest: When you play this Location, choose any one of the four above effects.

That’s all there is to it! We suggest you try to battle her with cards just from this set at first. But eventually, you’ll probably need to call in some reinforcements!

Vs System® 2PCG®: Monsters Unleashed! will hit stores this August. Ask for it today at your local gaming stores.

We hope you’ve enjoyed our card previews for Vs System® 2PCG®: Monsters Unleashed!  In case you’ve missed any of our other previews, hit the links below.


These cards are pretty AWESOME!