Vs. System 2PCG Defenders Preview: There’s Some Things About Marys

When Vs. System® returned last summer as Vs. System® 2PCGTM, one of the major changes was the purchase model. No longer would you have to repeatedly spend money on a seemingly limitless number of booster packs or make unfavorable trades just to get the cards you wanted. With Vs. System® 2PCGTM, you get four copies of every single card right in the box (with the exception of Main Characters, since you only need one to build any deck). You get four of every plot twist, every location and every supporting character. That paradigm is something that continues with the first expansion for the game, Defenders.

You see, there is one supporting character in the Defenders expansion that doesn’t have four copies.

Well, there actually is.

Now that we’ve thoroughly confused you, we’ll start with some background. In the Marvel universe there is a character named Mary Walker. She is gravely mentally ill and suffers from multiple personality disorder. The two dominant personalities she developed, known as “Bloody Mary” and “Typhoid Mary,” are violent and brutal, while Mary’s original “Innocent” personality is quite the opposite. Additionally, Mary is a mutant who possesses low-level psionic powers and pyrokinesis. She also has demonstrated excellent martial arts skills. This combination makes for an unpredictable, but formidable, foe for our heroes – most notably Daredevil.

So how do we go about turning all of these personalities into a Vs. System® 2PCGTM card that best represents Mary Walker? The obvious way would be to cram all of it into one supporting character and then give you four of them in the box – the same as every other card. But what fun would that be? So with Mary Walker, we took a different approach. Let’s take a look at Innocent Mary and you’ll begin to understand what we mean. 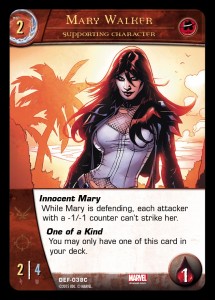 Innocent Mary is a Keyword power that will prevent Mary Walker from being struck at all while defending in combat by any attacker that has a -1/-1 counter. This can be very effective if you have a way to dole out -1/-1 counters easily (such as Cloak, featured in a prior preview). Plus her 4 DEF is quite solid for a 2-cost character, so you may be able to force your opponent to use resources or plot twists on her. And if you can get -1/-1 counters on your opponent’s characters, there will be many less options available as a result of Innocent Mary.

You might have already noticed some additional things about her card. Her other Keyword power, One of a Kind, states that you may only have one of this particular card in your deck. In fact, there’s only one of this card in the Defenders box. Also, her card number, instead of being DEF-038, is DEF-038C. What does all this mean? To begin to answer that, let’s first look at another Mary: 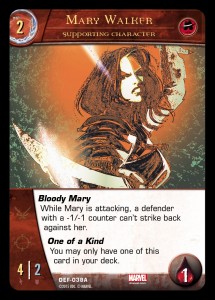 Bloody Mary, another of Mary Walker’s personalities, gets her own card as well. She is pretty much the reverse of Innocent Mary, which is fitting since she represents a polar opposite personality. Instead of being a 2/4, Bloody Mary is a 4/2. Sure, she has high attack and low defense, but her Keyword power enables her to avoid being struck back if you are attacking a character with a -1/-1 counter. As with the previous card, you may only have one in your deck and there’s only one of these in the box as well.

Are you starting to see what we did here? How about one more? 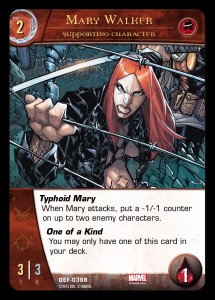 Typhoid Mary is more of an enabler for the other two Marys. Her ATK and DEF are both 3, halfway between the other two Marys. When she attacks, you get to place a -1/-1 counter on up to two enemy characters, which will help you active the effects of both Innocent Mary and Bloody Mary. Also, as with the others, you can only have one of this card in your deck and there’s only one in the box.

It’s important to note that Mary Walker still counts as one character – all of the Mary cards have the same name – and as with most other characters, Mary Walker is unique. Even though the image, card number, text and effects are different, you are nevertheless only permitted to have one Mary Walker on the field at any given time. Just like Mary Walker in the comics, there’s only one of her. You just don’t know which one it will be at any given time.

So there we have Mary Walker. We hope you enjoyed this look at… wait, what’s that? That’s only three Mary Walkers, you say? Shouldn’t there be four? Yep, you got us. There is a fourth Mary Walker card that you will find in the Defenders box. Just like the other three, you will only be permitted to have one of card DEF-038D in your deck. And just like Innocent, Bloody and Typhoid Mary, her effects work in tandem with the other Marys. What exactly does she do? We’re going to leave that as a surprise for you to discover when you open the box! In the meantime, post your best guesses for what you think the fourth Mary Walker does.

Another feature article is coming your way on Monday. We’ll take a look at a well-known character who is looking for a promotion.