Hello loyal players! It’s me, Ben Cichoski, one of the designers of Vs System® 2PCG®! We hope you’ve enjoyed the Vs System® 2PCG®: Monsters Unleashed! team previews the last few days. Next up are the Champions! The Champions are a team with a long history – the original team consisted of Hercules, Black Widow — and three others you will see in the next few days. More recently, the team was resurrected with a new young sextet of some of the most iconic heroes from all over the Marvel map: including Spider-Man, Ms. Marvel and four others! And look who just swung in — here’s *Spider-Man* now – Miles Morales! 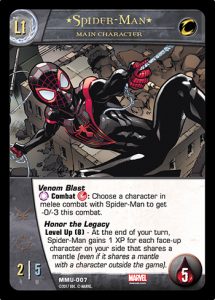 Formerly from the Ultimate universe, Miles now exists alongside the original Spider-Man, Peter Parker. You may notice some similarities to some other arachno-heroes. His Venom Blast is just like Spider-Woman’s and his Level Up Power rings of the Peter Parker Spider-Man Main Character.

Miles’s Level Up counts up the number of characters on your side that share a mantle, even if the character it shares with is not in play (or even in your deck).

As more characters with *s become a part of the Vs System 2PCG (very soon), older characters will suddenly count as “sharing a mantle” and will help Miles level up. 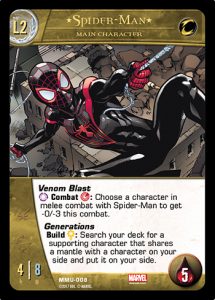 Miles’ Level 2 super power is a reference to the upcoming Generations comic series, in which two different characters with the same mantle star together.

But Miles has even more tricks up his spider-sleeves… 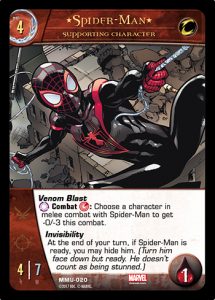 While Peter Parker relies on his spider-sense to keep out of harm’s way, Miles can actually disappear from sight. This card introduces a new game term: Hide (useful for both predators and prey). Here’s how it works:

When a character Hides, turn it face down but in the ready orientation. A hidden character works just like a stunned character (remove all +1/+1 and -1/-1 counters from it, it can’t attack or be attacked, it doesn’t protect characters, and it loses its powers while hidden) with one crucial difference: it’s not actually stunned. It doesn’t gain a wound, it won’t trigger powers that say “when a character gets stunned”, and you can’t use something like Extinguish to KO it.

Spidey is not the only one to share a mantle on the Champions — as you might have guessed. Marvel at the Ms. up next! 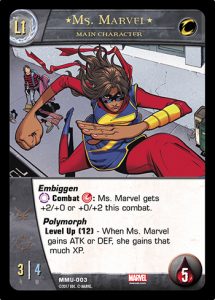 This Ms. Marvel, Kamala Khan, has a very different power set from Carol Danvers. She can stretch and enlarge her body, much like a fantastic genius we know. 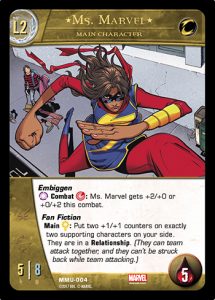 Oh, did I mention she likes to write fan fiction about her favorite super heroes? She’s the best! Pick your own favorite characters, and Kamala will make it so not only can they team attack together, but while doing so they can’t be struck back.

Ms. Marvel is just the first of a trio of awesome female heroes you’ll meet today! And although Black Widow sounds like a villain – she’s good…honest! 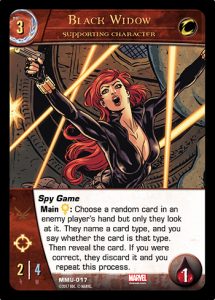 Natasha is back – and she’s not messing around with -1/-1 counters this time. She has a new mission and a new super power. A couple of notes: when you choose the random card each time, the enemy player must look at it, and the current card types are Main Character, Supporting Character, Location, Plot Twist, and Equipment.

Here’s another fan favorite, a sort of mash-up herself! 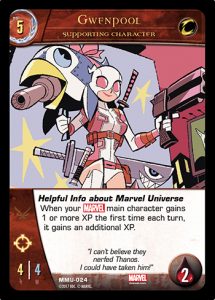 Gwenpool knows she is in a comic book (and card game) and loves to break the fourth wall. So she can really be helpful about the Marvel Universe. Marvel main characters are characters that are…never mind, you all know what that means.

And now we pause for a moment to get to know Ben Cichoski:

I graduated from Tufts University with a degree in Comparative Religion and Classical Studies a long time ago. Classical Studies is the study of ancient Greece and Rome (I can read Latin!). My parents supported my desire to study subjects that interested me, even though they might not translate directly to the job market. Indeed, my father’s graduation card read: “We are so proud of you. We will support you in any way we can. You can’t live at home.” Well, Mom and Dad, it’s all paying off! 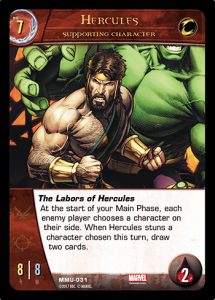 Now I didn’t study the comic book version of the legendary strongman, but it’s close enough! Hercules was famously tasked with a series of challenges designed to be impossible – but he welcomed and overcame each of these Twelve Labors. So make it hard for him, which will make it all the sweeter when he pummels whatever character you were trying to hide from him. Note that the ‘chosen characters’ reset each turn, so you only draw two cards if he stuns a character chosen that turn.

The Champions are a very interesting team with a wide variety of powers and origins. And the new team is really fun – six young, powerful, iconic heroes! They even have another, more informal name: the Baby Avengers! 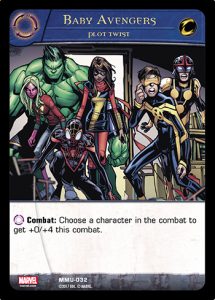 Tune in next week as we take a look at a team that shows us how outdated Humans really are.