Hello there players! Let’s get right to some Inhumans action from Vs System® 2PCG®: Monsters Unleashed! 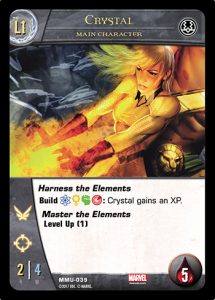 “Is she the first character to gain XP with a Super Power? 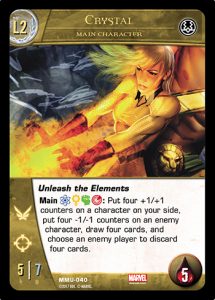 Enough about Main Characters for now. Let’s talk about what makes an Inhuman…inhuman. When someone with inhuman DNA gets exposed to Terrigen Mist, a process called Terrigenesis occurs which forms a cocoon around them. When they finally emerge from the cocoon they acquire their super powers. 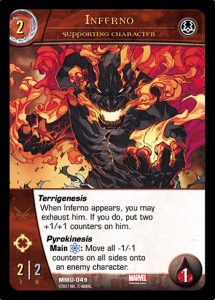 As you can see, Terrigenesis is an optional power.

In recent comics events, a Terrigen Bomb was detonated causing a Terrigen Cloud to sweep across the Earth. This led to the creation of many new Inhumans or “Nuhumans”. For gameplay purposes, we didn’t want to put the Terrigenesis power on every single inhuman, so we settled on putting it only on Nuhumans. We felt that Medusa, Black Bolt, and the other classic characters underwent terrigenesis so long ago that it wasn’t as integral to their characters as it was to the Nuhumans.

“How many Nuhumans with Terrigenesis are on the team?”

I really height that kind of question.

“Is Inferno the first card with two “nesis” powers?”

Extra! Extra! Read all about our next preview card! He has a dog! 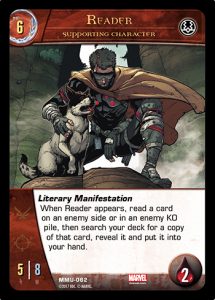 Exactly what it says.

This is more fun.

Not with this card.

Are you running out of questions?

“Does the copy of the card have to have the exact same name? What about AKA or basic locations with different names?”

Our next character is a very precise kind of guy. And is tough to convince to leave. You know the type. 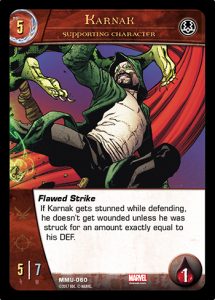 And now we come to the main event! Speak softly and carry a big stick, I always say. 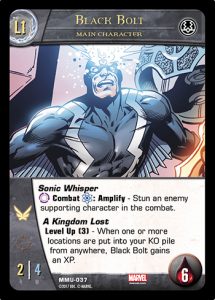 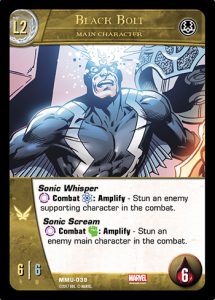 As usual, let’s end with a Plot Twist — Black Bolt doing his thing. 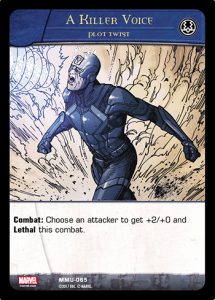 “Is it possible this was worded early in development as just ‘Killer Voice’?” 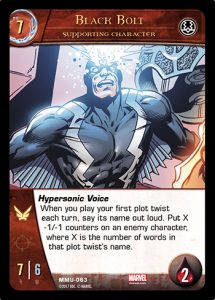