Hi everyone. Thank you for your patience. I know you’ve been waiting all week to get a real look at Vs System® 2PCG®: Monsters Unleashed!, and I’m here to tell you it’s finally time. Check it out: 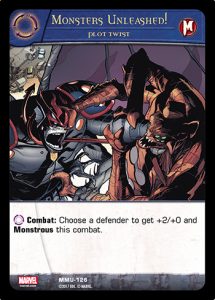 Okay, thanks everyone. Have a great weekend!

But first a little back story…

In the Marvel’s Monster’s Unleashed comic miniseries, giant monsters called Leviathons rain down from the sky wreaking havoc all over the world. They intend to cleanse the planet in preparation for the Leviathon Mother’s arrival.

Every available superhero fights back, but they just aren’t strong enough to stop the onslaught. That’s when Kid Kaiju shows up. He’s a young Inhuman with the ability to summon monsters simply by sketching them. (He could theoretically summon other kinds of beings, but monsters are his favorite.)

Just as all seems lost, Kid Kaiju summons a horde of monsters from classic Marvel stories to battle against the Leviathons. Monsters like… 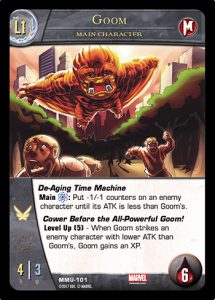 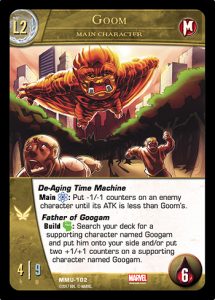 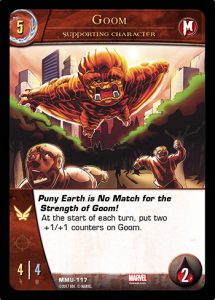 Dislikes: Circumstances requiring him to help humanity repel the Leviathons

Mixed Emotions About: His son, Googam 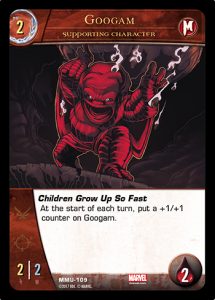 First appearance: Tales of Suspense #17 (two issues after his father)

Likes: Trying to be like his dad (well, the supporting character version of his dad)

Dislikes: Getting stuck in quicksand during a game of tag

And let’s not forget… 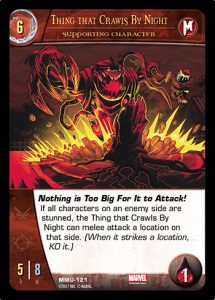 What is Too Big For It To Attack: Nothing

Rulesy Stuff: Attacking a location works just like attacking a character. Players can use super powers and play plot twists. The location won’t strike back. If somehow the location gets turned face down during the combat, Thing That Crawls By Night will still strike and KO that resource.

The monsters also have some unlikely allies like this hero who is more accustomed to hunting them: 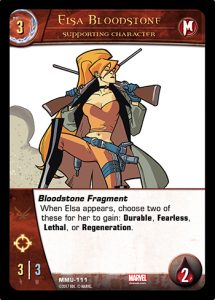 Favorite Keywords: Durable, Fearless, Lethal, Regeneration, and The Dark Force Hungers (I’m as surprised about that last one as you are.)

Finally after hours of battle, the monsters and Leviathons have beaten each other senseless. Then the Leviathon Mother shows up. And the only monster left to face her is the big fella himself: 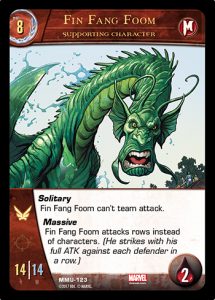 Likes: Attacking entire rows. (Each character in that row counts as a defender.)

Dislikes: Attacking individual characters. (He can’t do it.)

Really Dislikes: When the total ATK of characters he’s attacking is greater than or equal to his DEF. (Because they combine their ATK when striking back at him.)

Wait Did This Just Turn Into a FAQ Entry? Shhh… would you rather I wrote this in paragraph form?

But even Fin Fang Foom is no match for the Leviathon Mother. It all comes down to her vs Kid Kaiju. But what can he do when all his monster allies are down for the count?

He quickly sketches some totally new creations and suddenly they’re brought to life. But the Leviathon Mother is still too strong. She defeats one of his new monsters, leaving only five left. Then Kid Kaiju remembers a corny old saying from his dad: Five Fingers Make a Fist. 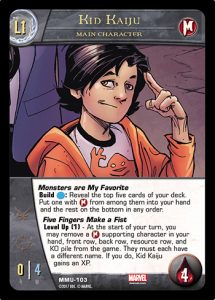 He draws one final creation – made up of all five of his new monsters: Smasher 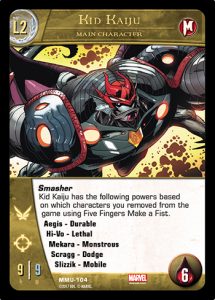 What happens next? Does Kid Kaiju win? Does the Leviathon Mother wipe out all of humanity? Tune in next week to find out.

Or better yet go read the comics. But definitely tune in next week for a look at a team that’s got no time for losers.

For more Vs System® 2PCG®: Monsters Unleashed! card previews, check out the links below.

Off to a great start with Unleashed previews. This mass of cards is almost too much to process at once.

Attacking the Resource Row? Yes, please.
This is another example of the new cards pushing the game into interesting new territory.

These are just Awesome.
I’m still trying to get my head around all these.