It took nearly 40 years, but the Boston Bruins are champions of the hockey world once again! For the first time in 39 NHL seasons, the Bruins are hoisting Lord Stanley’s Cup in celebration of their exciting, come-from-behind, best-of-seven-games series victory over the favored Vancouver Canucks in last night’s Game 7 showdown. And Upper Deck is putting together a pretty sweet commemorative box set to spotlight the B’s biggest win lately. 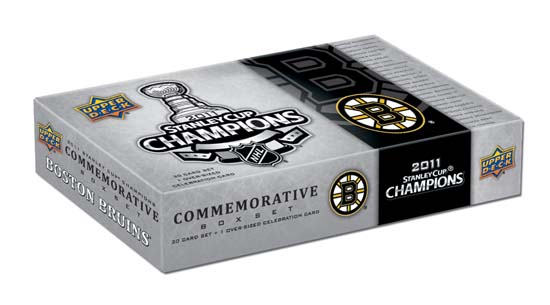 BRUINS BOX SET: Celebrating in Beantown would be even nicer with one of these box sets on the way!

Leading the way is an awesome 3.5” x 8” commemorative card showcasing the Bruins celebrating their Stanley Cup championship. The card back features Conn Smythe winner Tim Thomas hoisting the Cup, along with a game-by-game scoring recap.

LONG TIME COMING: It took 39 years, but now Lord Stanley's Cup is back residing in Beantown.

The 31-card set is comprised of 25 regular player cards spotlighting Boston’s top players from this season including Patrice Bergeron, Nathan Horton, David Krejci, Brad Marchand, Mark Recchi, Tyler Seguin, Johnny Boychuk, goaltender extraordinaire Tim Thomas and team captain, Zdeno Chara; five “Season Highlights” cards spotlighting five memorable moments from the 2010-11 NHL campaign; and the commemorative card. The five “Season Highlights” cards consist of: 1.) The Bruins rally from two games down to beat Montreal in the opening round of the playoffs; 2.) Avenging last season’s playoff collapse against Philadelphia with a sweep of the Flyers; 3.) Chara’s first career hat trick (1/17/11) against Carolina; 4.) Thomas leads the league in GAA (Goals Against Average) and saves percentage; and 5.) Seguin’s four-point effort in Game 2 of the Conference Finals against Tampa Bay ties the series at 1-1.

ONE TOUGH NETMINDER: With his superb play between the pipes, Thomas won the Conn Smythe Trophy to go along with the Stanley Cup (shown here).

The beautifully designed box set is available for preordering at Upper Deck’s online store for just $19.99! Don’t delay; put your order in today for the Bruins fanatic in your life!

Ah, just what I needed to link my viewers to 🙂