In the playoffs, it doesn’t matter how ugly the wins come, as long as they do. The Chicago Blackhawks managed to eke by the Tampa Bay lightning for the Stanley Cup Finals‘ fourth consecutive one-point margin victory last night, 2-1.

The Blackhawks’ superstars have been overshadowed by the Lightning’s high-flying offense this series. In fact, the sluggish start has seemed to become a pattern for the Hawks. But the underlying difference has been Tampa’s inability to find the back of the net due to stellar goal tending by Corey Crawford.

After the first period of play last night, Chicago totaled just two shots on the Lightning’s backup goalie, Andrei Vasilevskiy, and 19 total shots for the game. Leave it to the Captain to help pick the team’s proverbial backs off the ropes. In the second frame, Jonathan Toews flicked in the bouncing puck and sent it past the the Lightning’s 20-year-old netminder.

On the brink of a signature gritty defensive performance by the Blackhawks, the Lightning were preparing to once again battle back. That was until  Patrick Kane set up Brandon Saad for the go-ahead goal and eventual game-winner.

The series is now knotted at two games apiece. The margin for error is razor thin. Both teams march back to Amalie Arena for a critical Game 5 Saturday night.

In the spirit of Throwback Thursday, let’s put up a throwback card and see if our fans can come up with some great captions for this card! Please share your comical caption to this card for a lucky fan’s opportunity to score a Vladislav Namestnikov signed mini stick! 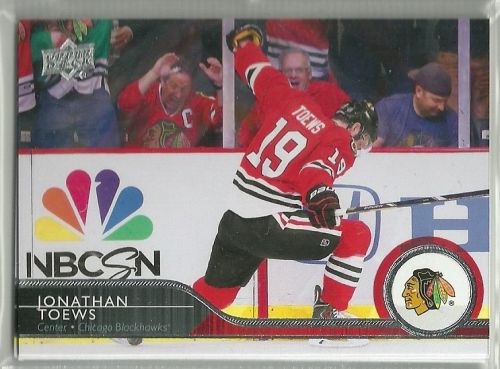 
Little known fact: Toews was the originator of what we now know as “Tebowing”.


All hail the the playoff beard!!!


AAAHHHHHH!!! How did a big ole spider get on the ice?!?!?! Even the dude behind the glass is FREAKING OUT!!!!


Captain Serious shows his more lighthearted side after a goal on Tampa Bay.


Lost my contact lens on that last hit. I know it’s here somewhere.


There is always thunder before lighting, Toews Thunder!


I believe I can score. I believe we can win the cup. When I think about every night. I see the puck hitting the net.


To honor fellow Upper Deck Alumni Michael Jordan, Jonathan celebrates by Ice Skating to I Believe I Can Fly!


No one was more surprised than Toews to see that the Queen was a die hard hockey fan.


When you pull the auto in the last pack #StartTheChainsaw


Everybody stop! I found a tooth on the ice!


Head for cover its a toews-nado!


Here we have Superman immediately before taking off to fight crime


“Ole I am Jonathan Toews the Greatest Bull fighter In all of chicago!”


Clutch, that’s the way you do it!


Captain Serious was not born, he was un-leashed!


FOR THOSE ABOUT TO SCORE – I SALUTE YOU!


DO THE HOCKEY POKEY NOT THE HOKEY POKEY!


You sir, in the front row, with the great Capt. C Jersey, c’mon down, you are the next contestant on THE TOEWS IS RIGHT!


After scoring his second goal of the first period of game 7, Toews attempted, and landed a triple lutz! The crowd went wild!!


Congrats to Steve W! Your comical comment has scored you a Vladislav Namestnikov autographed mini stick! Thank you to everyone for participating and we look forward to seeing your comments again soon.