For nearly 54 minutes, the Tampa Bay Lightning outplayed the Chicago Blackhawks in Game 1 of the Stanley Cup Finals. The Bolts were buzzing early after a whimsical, no-look backhander off the stick of Harvard graduate, Alex Killorn, found the back of the net. But that 1-0 lead would be all the daylight they would see.

As the hockey gods would have it, the Blackhawks’ patience and big-game experience outlasted Tampa Bay’s youth and inexperience.

Where were the superstars last night? Toews? Kane? Saad? The secret behind Chicago’s success the last six years is that they have an array of talent that knows how to win regardless of who is, or is not, playing well. That proved to be true when the visiting Blackhawks silenced a raucous Amalie Arena after netting two late third-period goals by Teuvo Teravainen and Antoine Vermette to steal the game, 2-1.

Before last night, Tervainen had never stepped onto the ice in the Stanley Cup Finals. Since being scratched from Game 3 of the Western Conference Finals, No. 86 has registered two goals and notched five points in five games. None bigger than last night. 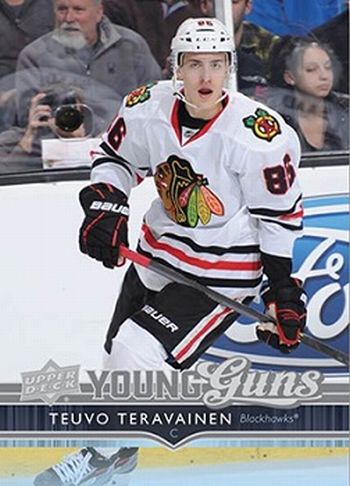 Just play it cool – have to make sure the photographer gets a good shot of my nameplate as Chicago’s newest secret weapon.

“Uh, yeah. Does it suprise you that I scored the crucial goal in game 1? I’m a gem, a rookie gem!”

Why does my reflection on the glass say SAAD?

Before I turn around to smile at the guy with the camera behind me, which is my good side, left or right?

the forecast for tonights game
rookie reign and a little lightning

Watch out or I’m gonna Teuvo a new one!!

.it was a great goal and boost for the team .im a blackhawks fan and the team was wondering around till that goal .awesome .go blackhawks go .and yopu said theif .well he stole the emotion from the lighting .taking the sting out of them

uhhh, Am i suppose to look at this camera or the one behind me ?

“Yeah I scored a big goal, but so what, all I did was make history.”

I’m going to light up the Lightning tonight. Go Hawks

My feet are so cold they are turning blue.

I KNOW THAT LADY IS TAKING A PICTURE OF MY BUTT!

TWO GOALS FOR TEUVO SO FAR!

Number 86 in your program, number 1 in Blackhawks fans’ hearts.

Wonder if this helps my rookie card value to finally catch up with the Johnny Hockey cards?

Teuvo for game 2!! I will score again!

That’s right Mr. Photographer. Get the spelling down on my name. You will be hearing it plenty in the years to come.

Ok Teuvo, the camera’s on. Be photogenic.

“In Soviet Russia, jersey wears you.”

Wow! Hershel from the Walking Dead is here to watch me play!

When talking Stanley Cups,
Kane and Toews each have 2.
But we’re all tied at ones,
When it comes to Upper Deck Young Guns.

“This sure ain’t the United Center, the fans in this arena need to WAKE UP!”

I hope that photo doesn’t end up on a hockey card. Its obviously not my best side.

Move over Teemu or whatever your name is.

Congrats to Jane B.! Your witty comment has scored you 5 packs of ICE Hockey Cards. Thank you to everyone for participating and we look forward to seeing your comments again soon.