Innovation has always been a huge part of what Upper Deck brings to the collectibles market. In 2013, the trading card manufacturer took sketch cards to an entirely new level with the release of the Art of the Ages set in Goodwin Champions. Upper Deck commissioned the company’s best artists to replicate classic masterpieces on a 2.5” x 3.5” canvas and inserted these cards randomly into packs. Today cards from this groundbreaking set command a premium in the secondary market on sites like eBay. 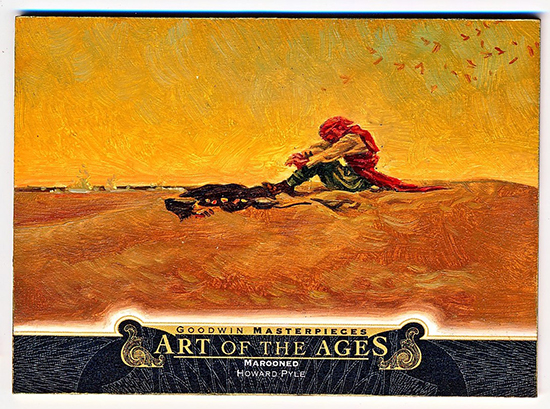 Each of these mini masterpieces are true one-of-one cards with a level of detail almost unimaginable with a canvas this size. Upper Deck produced this popular set in the Goodwin Champions product for 2013, 2014, 2015 and again in 2019. Recently we saw one fan’s collection and we had to share it as it is nothing short of amazing. Check out James B.’s story and the incredible gallery he created:

“I work at a card store (The Fantastic Store) and we opened a bunch of boxes of different card products for pack sales. Slowly they were sold off, but as always seems to happen, a few just lay there, slumbering; waiting to be cracked. When there were only ten packs left from four different products that literally sat there for over a year, I decided to have some fun and bust them on a Saturday night while watching some sports and unwinding. The old saying, ‘Never leave the last pack’ rang true as I discovered a variety of gems in these ten orphaned packs, but the real gem was found in a pack of 2013 Goodwin Champions. I saw the card was sleeved with gold painting on the side as I slowly revealed it. I was blown away to discover my first Art of the Ages card. 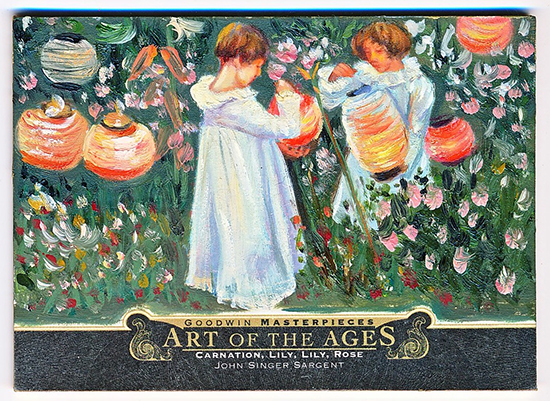 “I have an appreciation for art and when you actually hold one of these cards in your hands, you realize just how special they are. They are thick cards with gold painted on the sides, but what really impressed me is you can actually see the brush strokes from the artist on the card. These hand-painted replicas of famous works of art are so well done, you have to really study them to see the differences. After pulling this card I started getting more details about the set online and was deep down the rabbit hole soon after. So I guess this is a ‘thank you’ to everyone who passed on those last two Goodwin Champions packs!

“Right around then I started watching a show on Netflix called ‘While Collar’ about a con man who ends up working with the FBI assisting with white collar crimes. The show is centered heavily around stolen or lost art with a little bit of treasure and wine mixed in for good measure. It really helped me get interested in historic collectibles.

“I started buying some of the Art of the Ages cards online, but I wanted to thrill of pulling one from the pack again. I decided to buy an entire sealed case of 2015 Goodwin Champions, but after I made the purchase, I realized they were not one per case. In fact, there were only 300 total in the entire set. Uh-oh! I was six boxes in and decided to open one last box (lucky number 7). About halfway through the box I opened a pack and saw the soft sleeve and the gold painting on the sides. I was so excited I screamed and ran around the shop, but my fun came to an end when I tripped and fell with the card in hand. I held my hand up holding the card so it wouldn’t be damaged and instead I damaged myself. It was so freaking worth it. 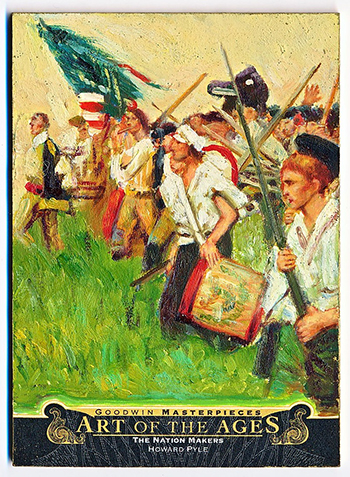 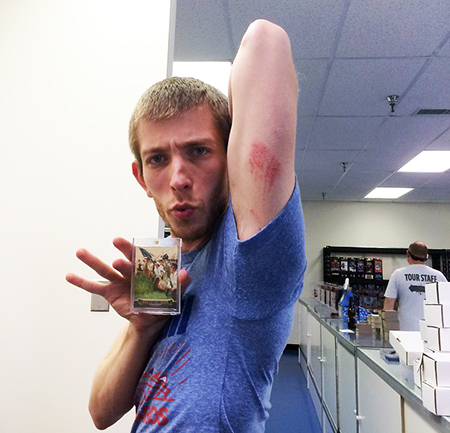 James may have felt some pain after his fall, but he kept his Art of the Ages card safe and ding-free!

“One of my favorites is a card I feel lucky to own as I was low on funds and didn’t think I would win the auction for it. I love how effortlessly the different concepts blend together. Seriously, just take a long look at the painting and make a list of all the different things you see. Then ask yourself, what would a painting look like with all these things in it? Your answer would probably be ‘it would look like a weird pile of crap.’ In truth, it’s just the opposite. It’s just a visually stunning masterpiece and one of Chagall’s seminal works. 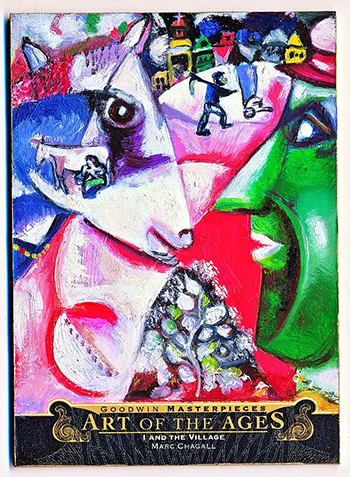 “My favorite card is The Storm on the Sea of Galilee by Rembrandt Harmenszoon van Rijn. The quality of the artwork is second to none. The painting itself depicts Jesus calming the storm in the Sea of Galilee. While I’m not overly interested in any specific religious themed works, the combination of brilliant interpretation of one of the miracles of Jesus depicted in such high quality by one of the greatest artists of all time brings enough clout to put this at the top of the list. 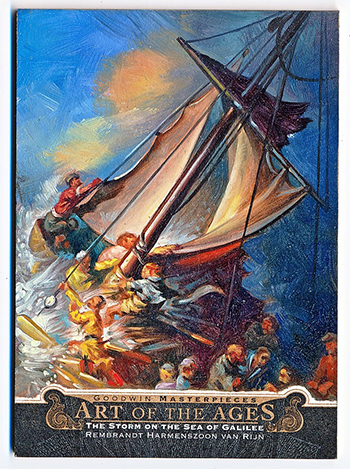 “However, the painting’s involvement in modern pop culture is what really sets it apart for me. It was one of thirteen pieces stolen from Boston’s Isabella Gardner Museum in 1990. The painting, which was Rembrandt’s only surviving seascape, has never been recovered. It is now the subject of the new Netflix documentary, ‘This is a Robbery.’  For now, I am privileged to own one of the best known copies of this masterpiece!

“I was looking at some frames that would fit these cards when Upper Deck reached out to me. As I talked with them about this story, I was also busy putting together a project at home. I recently completed it and I am thrilled to be able to share it here, take a look at my very own art gallery!” 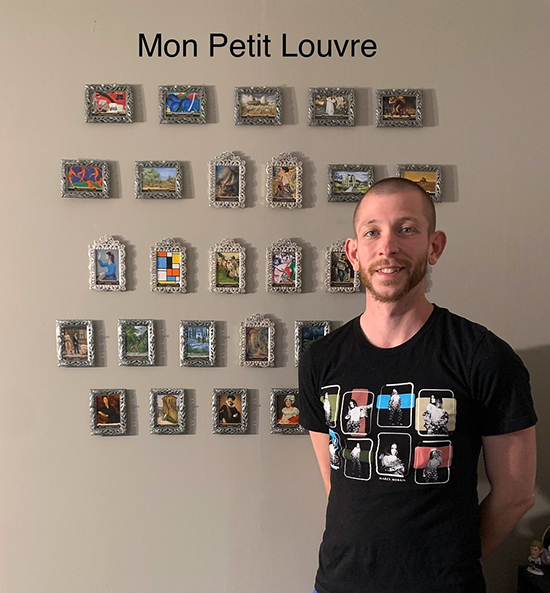 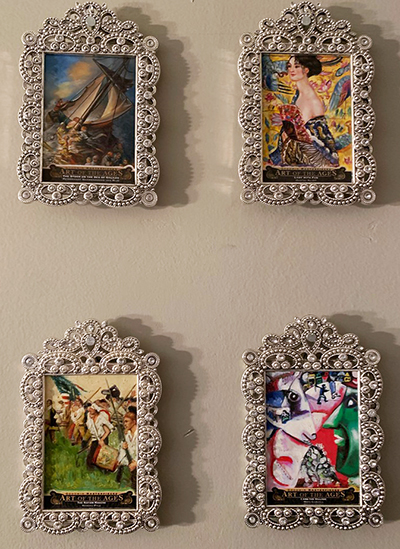 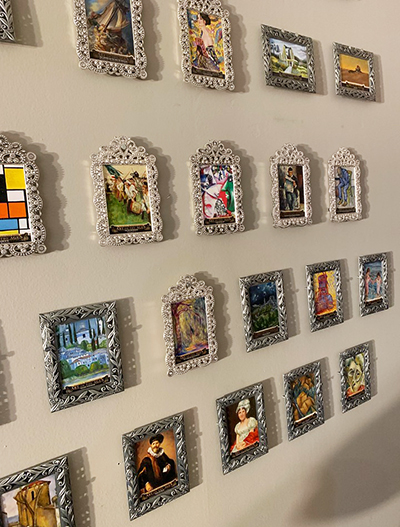 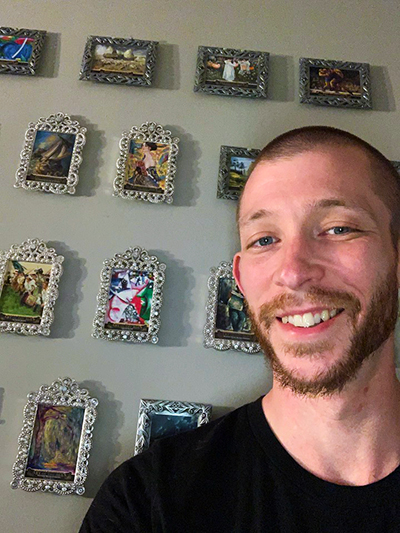 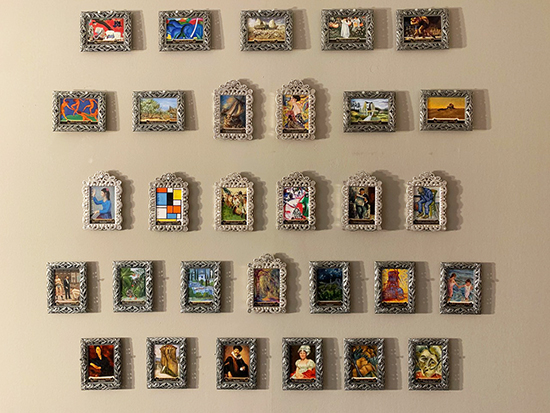 Thanks James for sharing your incredible collection with us. James will be bringing some of the key pieces of his collection into the Fantastic Store this summer for a chance for collectors to check them out in person. More details to come on that soon! If you’d like to reach out to James, you can find him at buffi@blowoutcards.com or on Instagram at @buffsbreaks. In a memorable post, James shares thoughts on his entire collection in the Blowout Cards Forum; check it out!

Upper Deck is pleased to share that we will be bringing back the Art of the Ages set in 2021 Goodwin Champions. Here’s a small preview of some of the completed artwork we have received that will randomly be inserted into the product. Happy Hunting! 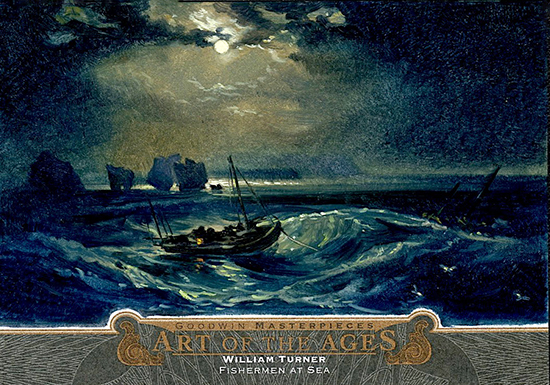 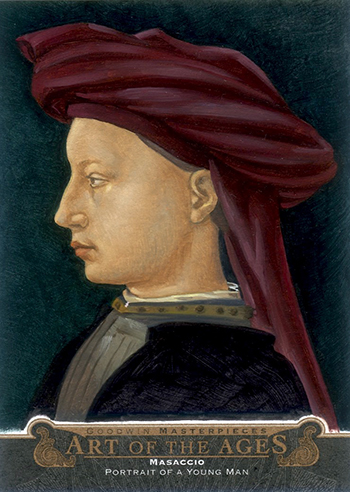 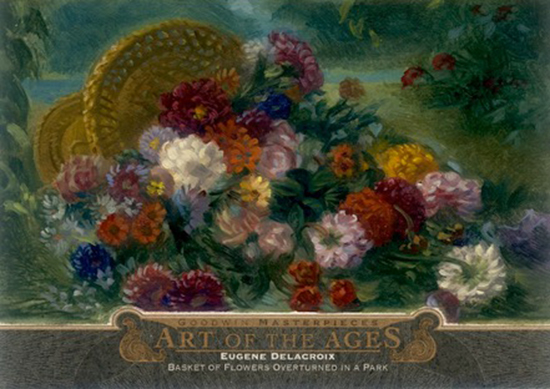 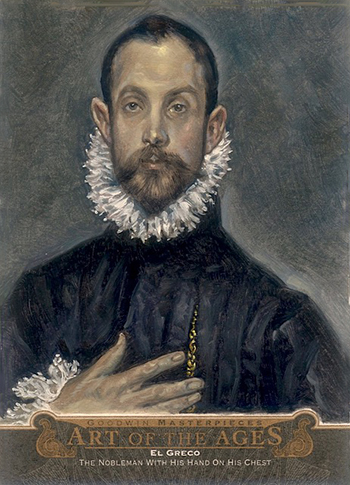 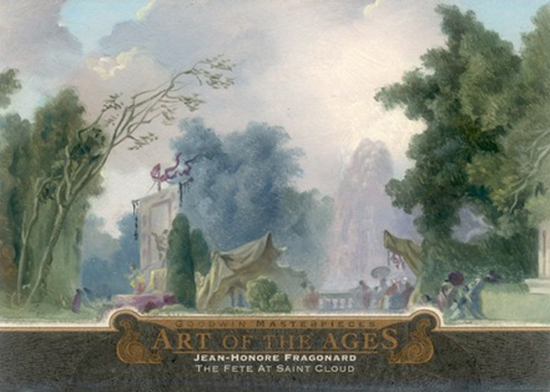 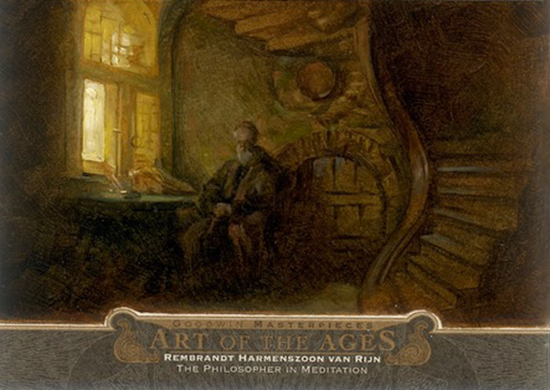 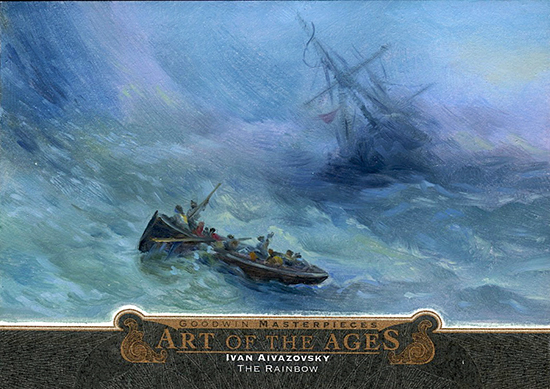 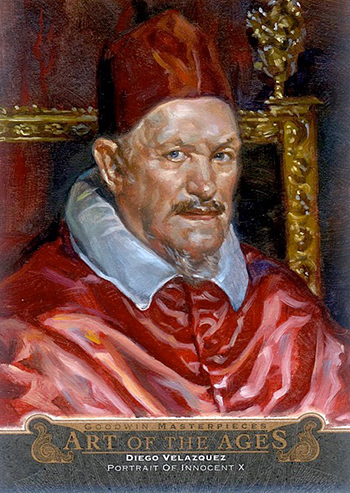 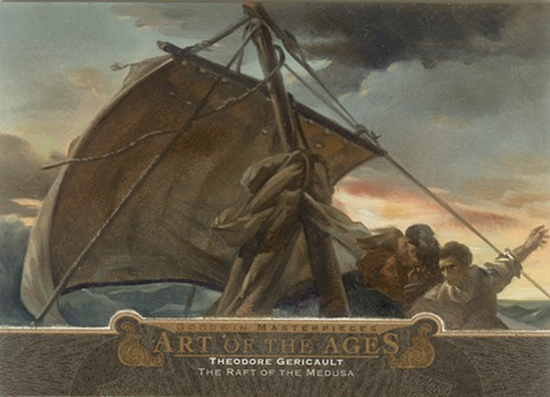