Voting has ended. All Twitter likes have been accounted for. In a close race amongst the Team MVPs, the leader pulled ahead and clinched the top spot. Upper Deck is proud to declare Sean Panganiban as the 1st Ultimate MVP and winner of the Heart Trophy! 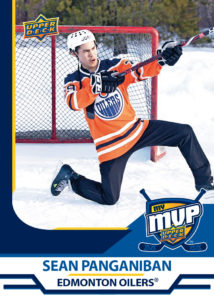 “Winning this contest and becoming ‘The Ultimate MVP’ fan of the NHL is incredible and surreal, as I truly love the Oilers. Most importantly, I was able to get my story out and talk about the health issues I’ve been battling and I was able to bring awareness to it. I was able to show people that are suffering with what I went through, that it’s possible to get your life back and winning this contest is proof. All in all, the contest was an incredible experience. Hats off to all the other finalists because it was a battle, but I gave it 110% and I grinded out the win.”

Sean Panganiban exemplifies what an Ultimate MVP is through his commitment to the Edmonton Oilers and his positive impact upon his fan community. As a lifelong Oilers’ fan, he learned in 2018 that the Oilers were playing in Germany for the NHL Global Series and knew he HAD to go. As he started to save and plan for the trip, he contracted a rare virus that affected his ability to walk, balance and control his eyes. Although it was a difficult recovery, Sean pushed through and made the trip overseas to see his team play!

For the past two years, Sean has had to retrain his brain to learn all those functions again. Through his personal journey, Sean has been able to help people through support groups, including hockey players, to help cope and overcome their illness. Sean even made a YouTube video on his recovery to share with others who may be experiencing the same hardships he went through.

He’s a true champ not only did he help mi instantly for his continued support and orderly and well versed step by step detail on how he improved. when he mentions in his video sensitive computers i turned off all my blue setting in everything but his persistence got me to get up

Sean’s Journey Throughout the Competition

At the beginning of 2020, Upper Deck had a mission to find NHL’s Ultimate MVP or Most Valuable Person. Through a league-wide contest of participating teams, there were hundreds of nominations that came from all over North America!

On March 5-15, Sean was no longer competing against his fellow Oilers fans, but the other Team MVPs from the league. In the beginning, Sean was trailing behind Columbus Blue Jacket’s MVP Laing Akers who had amassed over a thousand votes. However, at the halfway point, that’s when Sean took the lead and there were no signs of slowing down. “In the Finals, it was an amazing 10 days to get votes. From receiving shout outs from celebrities, to being interviewed on tv and radio stations and just all the love and support from all the Oilers fans.” Sean states as he reflects on his experience.

Sean is not only one of the biggest hockey fans in the world, but he’s got one of the biggest hearts. He knows the meaning of perseverance better than anyone – which is why I’d like you to vote that Sean get a FREE trip to the Stanley Cup Final! VOTE HERE: https://t.co/bQuzfekiv7

My radio interview with CBC