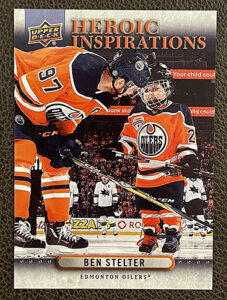 On March 25, 2022, 5-year-old Ben Stelter took the hockey world by storm when he was named ‘player of the game’ after the Edmonton Oilers defeat the San Jose Sharks at home.

Player of the game! You’ve got this buddy. #GoBenGo pic.twitter.com/YMj4DoexKJ

For the last year, Stelter has been battling glioblastoma, a type of brain cancer. After going through 4 rounds of chemotherapy and 30 sessions of radiation to remove it, the tumor returned in December, 2021. He then had a second surgery and went through two more weeks of chemotherapy in January. Soon after, he underwent an MRI where they discovered the tumor had grown.

This April, Ben has gone through five sessions of radiation and currently has no more treatments. “We are enjoying life, having fun and making memories [with the Oilers],” says Ben’s mom Lea Stelter. “We are living life day to day and enjoying that.” The family says they are staying positive and all the time spent with the Oilers has been great.

#LetsGoOilers #oilers @OilersNation Meet Ben. He’s 4 years old and was just diagnosed with a brain tumour. He had brain surgery and is now recovering at home before he starts radiation. We can’t keep his stick out of his hands and it’s his dream to meet his hero Connor McDavid. pic.twitter.com/p5BCiEKIEy

Stelter is a huge Oilers fan and an even bigger Connor McDavid fan. So much so, that when he was younger, he used to tell people his name was Connor. This past March, Stelter got to meet his hero for the first time and the Oilers organization made sure it was an experience that him and his family would never forget. From joining McDavid on the ice before the game, to being one of the guys in the locker room after their win, Ben’s story captured the hearts of the entire internet and hockey community.

What an amazing night! Thank you so much @scotiabank @brian_d_porter @ashifmawji @EdmontonOilers and everyone else that made the night so special for Ben and our family. We are so grateful for everything. Ben is on cloud nine and will never forget this night! Our hearts are full! pic.twitter.com/pHteQBA4EZ

Since then, Ben has attended 8 home games with the Edmonton Oilers. The Oilers have been 8-0 with Ben in attendance at Rogers Place. All things considered, it only makes sense that Ben be integrated even more into the hockey world with his very own, officially licensed Upper Deck trading card.

On Thursday, April 28th, Ben attended the Oilers morning skate. Afterward, McDavid himself presented to Ben his first officially licensed Upper Deck trading card. McDavid, an Upper Deck spokesperson, handed to Ben an extra-large version of his card that was signed by him and his teammates. “I love it!” Ben said as he smiled and giggled with joy. 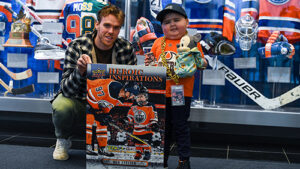 A limited amount of Ben’s cards will be given out at tonight’s Oilers game against the San Jose Sharks. The Upper Deck company is honored and thrilled to have Ben Stelter be featured on one of our Heroic Inspirations cards.

Bravest kid ive ever seen, Glioblastomas are always termial, and hes and his family are facing it with a smile, laughter and joy, what an incredible kid and an incredible family