Let’s Introduce You To Our 2021 Ultimate MVP Winner: Michael Hebert!

The votes are in and the NHL fandom has spoken. With an extremely close race to the top, the contestants pulled out all the stops to get their fan base to vote. There is one who reigns supreme. Upper Deck is proud to announce Michael Hebert as the 2021 Ultimate MVP Winner! 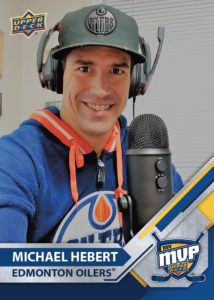 Michael’s supporters and fans will be able to find his own trading in the upcoming 2021-22 MVP product that’s slated to come out later this year!

“I’m still in a little shock that I won the contest. I’m really excited and how could you not be when you consider that most people will never see their face on a hockey card. The additional merchandise is great, but the hockey card is the real treasure! I couldn’t be happier and my family is also happy for me. I heard and saw all of the amazing words and support from Oilers fans that responded to my posts or created their own. I went to thank everyone and realized that there were too many to thank.”

Michael Hebert truly embodies what an Ultimate MVP is through his unwavering dedication to the Edmonton Oilers and for his strong passion for giving back to the community. Born and raised in Edmonton, but currently residing in Halifax, Michael has followed the Oilers since their dynasty years. Michael LOVES hockey! He watches every Oilers game and makes the journey to see them play throughout North America.

At the end of December 2017, Michael created his own Oilers-based podcast where he’s interviewed players, other media, and fans. Michael has even helped three other fans create their own Oilers podcast.

As someone that has been down on their luck, Michael has been fortunate to receive a helping hand from the Food Bank and other programs. He’s struggled with addictions but found his way out through agencies and support! So that’s where his passion to give back stems from; he wants to make sure that other people are able to get the same help as he did. When Michael has a chance to give back AND include hockey, he makes sure to get involved. Michael has run four charity hockey games, been on the Hockey Helps the Homeless (HHTH) committee, played in numerous charity tournaments including Cross Check Cancer in Calgary and Tech4Goods in Toronto.

“As part of winning the Upper Deck Ultimate MVP contest, I hope that it gives me a heightened platform to continue the work me AND my great group of friends do to support charities and hockey.”

Furthermore, Michael is 50% indigenous ancestry, specifically Cree. And he’s excited that he can represent another Cree success with hockey!

Michael’s Journey To the Top

On the heels of a successful inaugural season, Upper Deck wanted to continue the search for the next NHL superfan. There were hundreds of nominations that poured in from throughout North America.

Throughout each phase of voting, there was strong competition that forced Michael to redouble his efforts and continue campaigning. Michael employed three strategies: (1) reach out to as much of the Oilers fan base as possible, (2) appeal to the competitive nature of Oilers fans by suggesting that a vote for him is a vote for the Oilers, and (3) be as authentic as possible, letting people decided based on his merit. In response to his win, Michael “heard and saw all the amazing words and support from Oilers fans that responded to [his] posts or created their own. [He] went to thank everyone and realized that there were too many to thank.”

Michael is a great guy and such a huge part of Oilers community heart and soul. Please throw him your support by liking the post below 🙏💙🧡 https://t.co/WzhFstfsET

Give this Upper Deck tweet a like please… michael has done some great things in our community. He’s certainly deserving of some recognition!! https://t.co/SSC017aTuT

Game Day in Oil Country!! Please give the tweet below a LIKE and support our boy Michael! I can personally vouch for Mike as an MVP and all-around great guy. And if that’s not a good enough reason, throw him a vote because we can’t finish second to some guy from Nashville! https://t.co/F5JphDNCvU