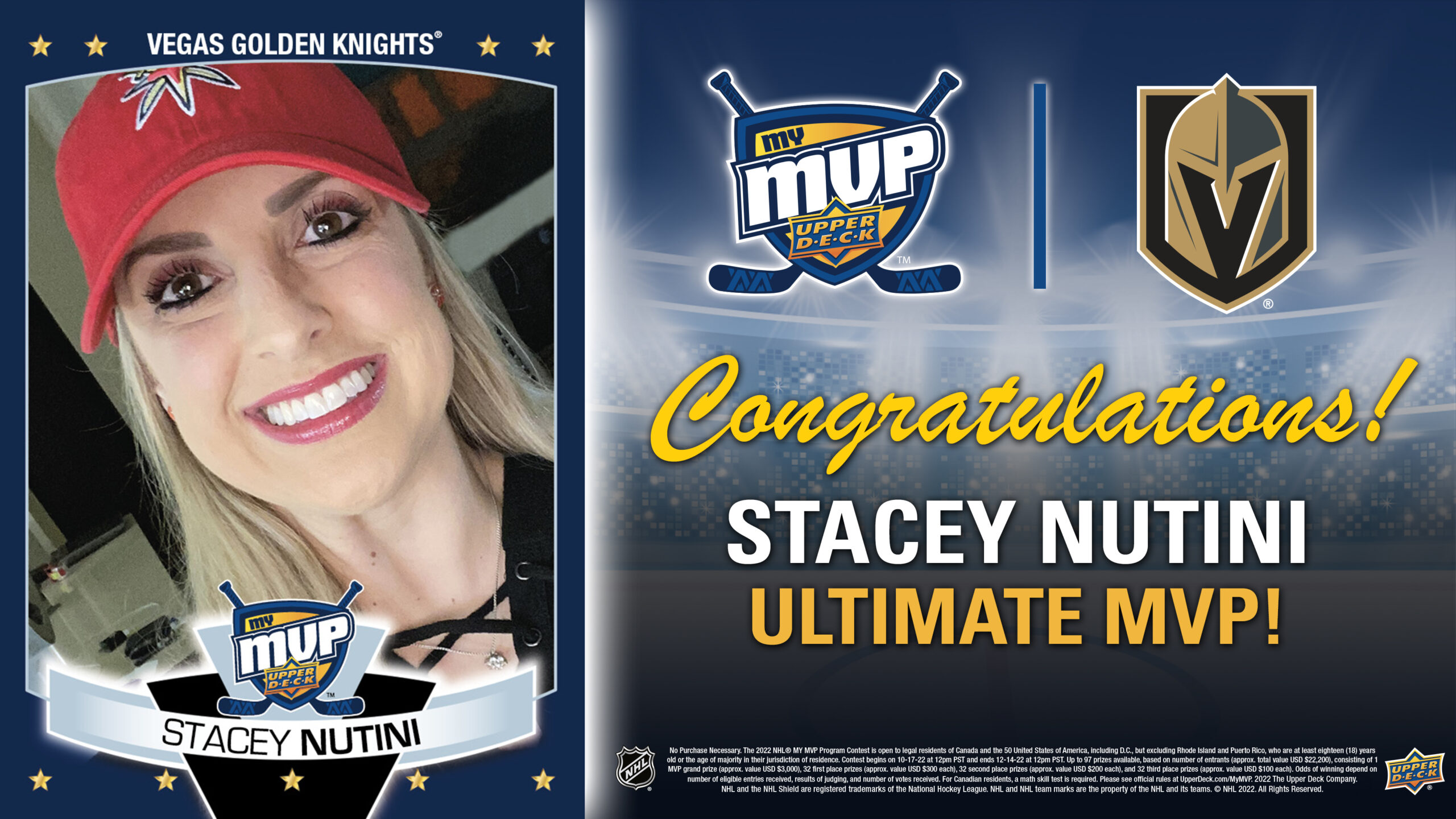 A Golden Win for Ultimate MVP

The votes are in! After two, long rounds of public voting, the NHL and Hobby community has spoken. Upper Deck is proud to announce Stacey Nutini as the 2022 Ultimate MVP Winner! With a huge fan base supporting her, Stacey shot right to the top of the rankings from the very beginning. Although she was battling some tough competition from other fans along the way, Stacey held her own and rode her way to the title of Ultimate MVP!

“The experience of participating in this event was very positive.  I met a lot of the other great contestants through Twitter and could feel their passion for their teams shine and that was really neat!” – Stacey Nutini

After participating in the 2021 MyMVP Contest, Stacey became her Team MVP but unfortunately got out beat for the top spot of Ultimate MVP. This year she said, “I want to take this a step further and win the entire league!” which is exactly what she did.

“Winning this contest means a lot to me because I had the support of all these wonderful women across the league cheering me on and supporting me.” – Stacey Nutini

Think she should be the Ultimate MVP? Cast your vote by liking this tweet! 🗳️ ♥️

Get to Know Stacey Nutini

Stacey describes herself as “the biggest Vegas Golden Knights fan” and she prides herself on her vast knowledge of all 32 NHL teams. She has become a profound member of the Golden Knights and hockey community. She runs an all-female fan group for all 32 teams, and the largest group is called, “Ladies of the Knight” which has over 13,000 members! Click HERE to check it out and become a member of her group.

“I began creating spaces for females to connect with other fans in the hockey world in 2020 with my Ladies of the Knight Facebook group.  A year after that, I decided to replicate that concept across the entire league.” – Stacey Nutini

In addition to her love for the game, Stacey is also a big-time collector and member of the hobby. She has another all-female group dedicated to card breaks where she opens Upper Deck product daily on live streams.  The group is called Puck Gal Card Breaks. You can view the group here or watch the breaks on her YouTube channel.

Thats our girl, Stacie is an amazing women, friend, entrapanuer and crazy fan of the Las Vegas Golden Knights. She created safe spaces for women to come together and share team “fandom”. She creates meetups in different cities that she goes to watch hockey games. Does Card breaks around her very busy schedule and has sip and shops for small business to share VGK merch. Also does fund raising for kids with Bark Andre Flurry. I dont havea clue where she gets the energy or time. Fantastic choice Upper Deck
She is an all star

[…] “Winning this contest mean a lot to me because I had the support of all these wonderful women across the League cheering me on and supporting me,” Nutini told Upper Deck. […]