It isn’t often that a season’s second-place finisher outshines the year’s champions. Even if they had the best performance, athletes are rarely awarded with awards unless they win the championship. That changed Wednesday evening at the 2015 ESPYs after LeBron James took home the award for “Best Championship Performance.”

Despite the Cleveland Cavaliers losing to the Golden State Warriors in last month’s NBA Finals, James’ performance was masterful. So much so, he received votes for Finals MVP despite not winning the championship. James averaged 36 points, 13 rebounds and nine assists during the Finals.

Although on the losing end, his staggering numbers will go down as the first player in history to lead both teams in the Finals in points, rebounds and assists. That is the reason he didn’t walk home empty-handed last night.

In the spirit of Throwback Thursday, let’s put up a throwback card and see if our fans can come up with some great captions for this card! Please share your comical caption to this card for a lucky fan’s opportunity to score 5 packs of SP Authentic Basketball Cards! 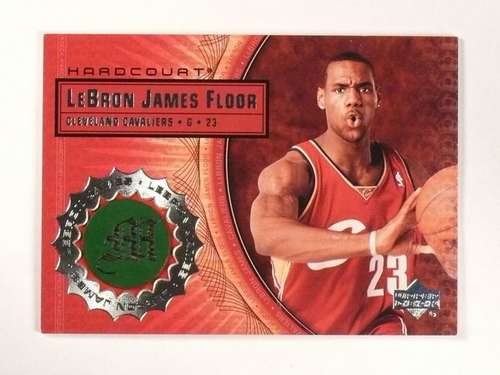 ‘Ooh, is that really my hairline in the future? I wanna be like Mike, but not with the same ‘do!’

In the spirit of Ric Flair
WOOOOOOOOOOO!

You want your Floors “SQUEEKY” Clean?

“We will Clean Up the Competition”, That’s a Promise!

“I feel confident cause I’m the best commenter in the world, it’s that simple”

Sweet card but he will never be better then MJ.

Whoooo! Ric Flair said it best! In order to be the man, you have to beat the man! Watch out NBA, the King is ready to rule the Court!

Opps, too much Botox.

WHOOOOOOOOO..Smooth as a baby’s butt.

Who let the dogs out?!

“Darnit Amy Schumer, I told you to put your clothes back on! I’m a happily married man!”

WHO would have thought I would come back to Cleveland!!

Ooooo! Is that Amy Schumar in a Bikini!

“Do you think my lips look fuller when I throw a chest pass? Maybe it’s Maybelline.”

Free throws so good, it’ll make you want to hit your mama!!

When my basketball skills go I can draw a star around my eye and start a KISS tribute band.

Don’t be so Cavalier, whistle while you work

I won an “ESPY” now I deserve an Oscar trophy for my performance in “Trainwreck!”

LeBron is looking at the cards, everybody.

Whoa… my hairline is disappearing quicker than I thought, time to get the hair plugs.

Wooooah I didn’t know this was a “NO FLEX ZONE”!

Congrats to Matthew P. ! Your witty comment has scored you 5 packs of SP Authentic Basketball Cards. Thank you to everyone for participating and we look forward to seeing your comments again soon.