Miami’s Dwyane Wade and Chris Bosh are terrific basketball players, but it’s LeBron James who will be the deciding factor on whether or not the HEAT advance to the NBA Finals. Bosh had his best game (34 points, five boards and two steals) of the season last night in a convincing 96-85 win over the Chicago Bulls. It was Game 3 of the Eastern Conference Finals and now the HEAT own a 2-1 lead in the best-of-seven series. But don’t be fooled by Bosh’s outrageous performance; Miami’s destiny rests in the hands of James and nobody else.

When “The Decision” was announced last July – when LeBron went on ESPN for 60 minutes to televise the fact he was taking his talents to South Beach – the hopes of the HEAT faithful rested solely in his hands. D-Wade is great. He was the MVP of the 2006 NBA Finals and led the franchise to its only world championship with a four-games-to-two win over the Dallas Mavericks and Dirk Nowitzki. But since that season, the HEAT have been far from competitive based on the fact that he’s always had a questionable supporting cast. And Bosh’s signing with Miami prior to James was beneficial to landing LeBron in South Beach. But by no means is Bosh the go-to guy. It all boils down to LeBron’s impact and he knows it. 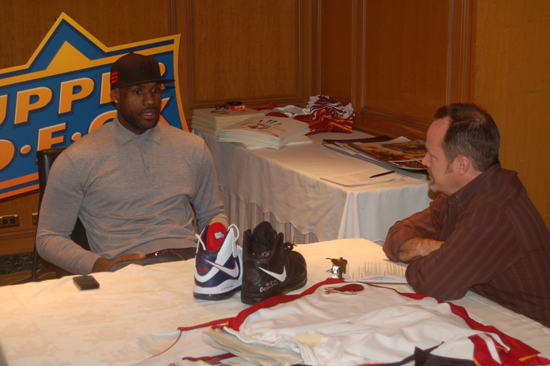 CHAMPIONSHIP HOPES: If the HEAT stay healthy, LeBron likes their chances this postseason.

In January, when I interviewed him just prior to another UDA autograph-signing session, he told me: “Coming into this season, we knew it was gonna be a challenge. A lot of sacrifices were made, both on the court and off the court. And we knew it was gonna take some time for us to get to know each other, on the court, and once we figured that out, we knew we could play with the best of the teams and play at a high level.”

The HEAT finished the regular season with a 58-24 record, good for the Southeast Division title and second best in the Eastern Conference, four wins behind the Bulls. LeBron led the team in scoring average (26.7 per game), as well as assists (7.0) and steals (1.6). His role was whatever the HEAT needed him to do. “I just wanted to be the best player I could be, on and off the court. I wanted to be as dominant as I was in Cleveland and play at an MVP level every night. No matter if it meant taking less shots or playing less minutes, whatever my role was going to be, I was going to be that same dominant player every night and not take a game off.”

When asked whether or not it’s difficult sharing the limelight and the responsibilities with Wade and Bosh, he answered: “It’s not hard at all. I’m a very humble kid who comes from a humble background. The fact that we sacrifice for the better of the team, I’ve never had a problem with that from the jump. And that’s why I decided to go to South Beach and team up with those two guys.”

The HEAT now find themselves two wins away from the franchise’s second trip to the NBA Finals and six wins away from winning it all. So far in the playoffs, LeBron leads Miami’s offensive charge by averaging a team-high 25.2 points per game to go along with five assists. And their opponent at the big dance next month could very well be the Mavericks once again. Can history repeat itself?

“That’s our goal,” said LeBron. “If we stay healthy, then we feel like we have a great chance of winning a championship.”

Even as a dyed-in-the-wool Celtics fan, I concur. The HEAT have what it takes to win it all this season. Now time will tell. Game 4 starts tomorrow at 8:30 p.m. (EST). Don’t miss it.