Despite being an All-Star and serving as the centerpiece of the Philadelphia 76ers for eight seasons, Andre Iguodala understood his new-found role with the Golden State Warriors. Iguodala’s year-long sacrifice of coming off of the bench paid off in a monstrous way.

When called upon, the 31-year-old changed the course of the 2015 NBA Finals with his gutsy defense and steady offensive attack. Although he hadn’t recorded a single start all season until Game 4 of the Finals, Iguodala was the Warriors’ best player by a large margin.

For the second consecutive year, the recipients of the MVP award were assigned the task of “the hardest job in basketball.” According to Golden State head coach, Steve Kerr, that assignment refers to the challenge of guarding the league’s best player, LeBron James.

In the spirit of Throwback Thursday, let’s put up a throwback card and see if our fans can come up with some great captions for this Andre Iguodala card! Please share your comical caption to this card for a lucky fan’s opportunity to score 5 packs of SP Authentic Basketball cards! 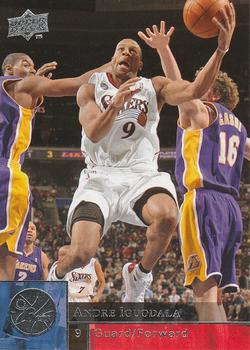 P. U. who forgot to wash their armpits today???

I hope that’s not a spider I feel on the back of my head!

“Uh oh…not now!!! Now is DEFINiTELY not a good time for travelers diarrhea!!!”

Who is that giving me a “wet willy”?

I’m way too fast. You two both missed the block my a mile.

(looks like he is making a Bill Cosby Face. so in his best Cosby impression Andre says…)

You got to put the ball…..in….the hoop….deee….hoop. Slam it down like a snack cup of chocolate pudding” *cue eye roll

A FAST BREAKER BETWEEN TWO LAKERS!

I’M A BETTER FAKER THAN A LAKER!

LeBron passed to me more than his teammates!

Cause this is Thriller, Thriller Night!

“Ok…over, under, around and through…”

“Now this is a pose for a MVP Statue of myself!”

Congrats to Jev C for winning this week’s ‘Create A Caption Promotion’ and thanks as always to everyone for participating. Look forward to reading your comments next week!