Upper Deck Authenticated, in conjunction with Memory Lane, Inc., is now offering game-used equipment from many of its exclusive athletes via online auctions. To get the proverbial ball rolling, UDA has supplied an item that will surely garner its share of eyes, bidders and excitement: LeBron James’ complete game-used uniform (jersey and shorts) from an official NBA game earlier this season against the rival Boston Celtics! That’s right, through its exclusive autograph agreement with LeBron, UDA has secured several game-used items of King James. This particular auction marks the first time that a complete set of LeBron James game-used equipment has been made available to the public. As with all UDA game-used offerings, these pieces were secured directly from the athlete and authenticated through UDA’s patented five-step authentication process. 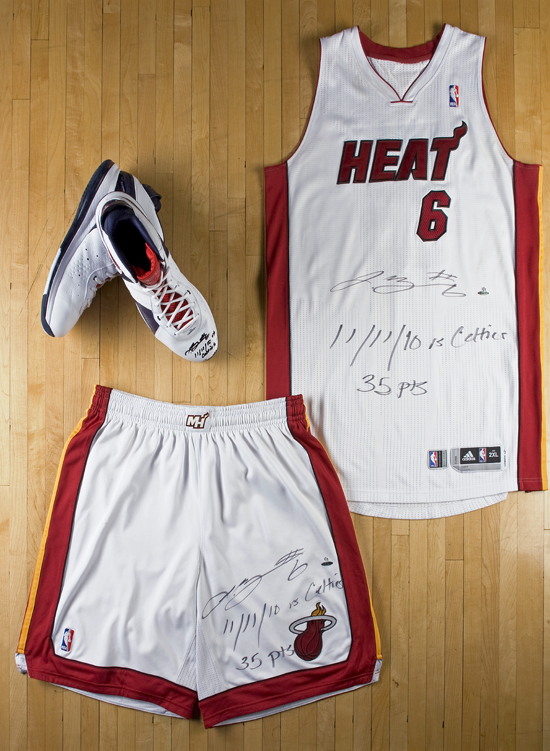 Here's your chance to get as close to LeBron James as you can by bidding on this game-used Heat uniform that LeBron wore against the juggernaut Boston Celtics back on Nov. 11, 2010. He scored a game-high 35 points!

The first item up for bid is LeBron’s home Heat white uniform from the Nov. 11, 2010,  clash against the Celtics in which LeBron scored a game-high 35 points, along with 10 rebounds, nine assists and three steals. Also included with this unique offering is the pair of Nike white-red-and-blue shoes (size 16) LeBron wore that evening. Despite his outstanding individual effort, however, the Heat found themselves on the short end of a 112-107 decision. Despite losing the war, LeBron won the inside battle and showed once again why he’s a constant force to be reckoned with. He has autographed each piece with his signature, and has also inscribed the date of the game (11-11-10) and the number of points he scored (35).

With the Celtics just sweeping the New York Knicks in four straight in their opening round playoff battle, and the Heat on the verge of closing out the Sixers in their Eastern Conference series, the stage is set for these two powerhouses to once again engage in another memorable showdown. Get as close to the action as you can by bidding on (and winning) this sought-after assortment of game-worn LeBron James Miami Heat memorabilia, only available from Upper Deck Authenticated! The online action started on April 8 with an opening bid of $2,500. Bidding on the complete uniform is currently up to $7,848 with the bidding scheduled to close at 10 p.m. (EST) on May 5, 2011. Jump in and place a bid while you still can!