I am an old school collector at my core and enjoy cards that take me back to a more simple time. I came of age in the ‘80’s when a simple cardboard rookie card was enough to make my day. I still have a special place in my heart for a nice old fashion RC.

When done right, they don’t need all the extra bells and whistles of crash numbering, memorabilia or even autographs. That is easier said than done. In a collecting landscape dominated by cards featuring autographs and memorabilia swatches, finding a definitive rookie card of a player can be tricky. That is unless you are a hockey fan.

Upper Deck helped to usher in the modern trinity of collecting. First with the epic Reggie Jackson Heroes hand-numbered autograph card and then in 1997 with the release of the game-used- jersey cards. This makes it all the more interesting that the company that had a major hand in the creation of the high-end market also produce one of the singe greatest base rookie sets of the modern age.

As with most things cardboard this set has humble beginnings in the early ‘90’s. 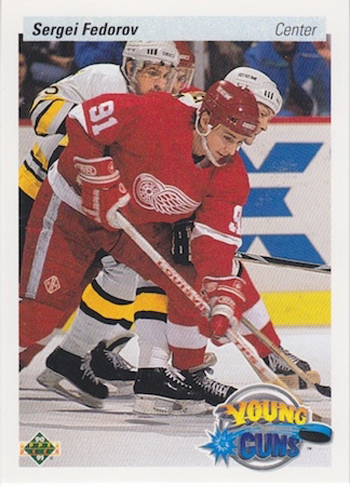 The 1990-91 UD hockey set was great for many reasons and not the least of which being the first Young Guns set. The first set had the two biggest rookies of the era with Russian imports Sergei Federov and Pavel Bure. 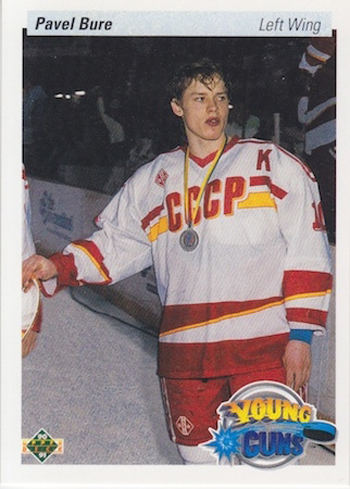 The set was a huge hit and cemented UD as hockey heavyweight. The Young Guns were popular but didn’t hit full stride until about 15 years later. 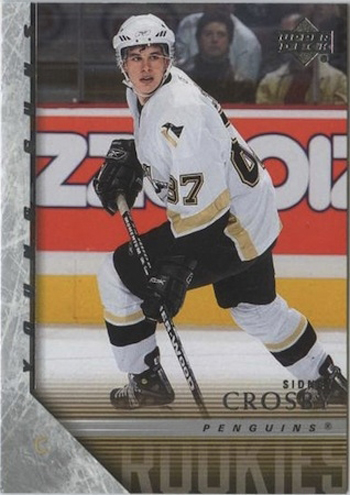 The set hit legendary levels in 2005-06 when Sidney Crosby and Alexander Ovechkin came on the scene in a very memorable season for collectors. The Crosby Young Guns cards made huge waves as they sold for well over $100, especially when graded. Not since the mid ‘90’s had a regular rookie card you could pull from a $3 pack sold for triple digits. For an old school collector like me, it was a very exciting moment and I had to take notice. The base rookie was back! 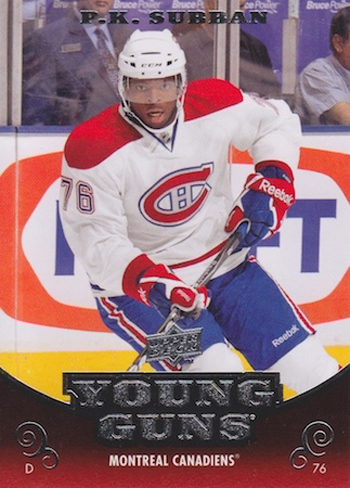 The trend has continued with each year’s Young Guns rookies being they cards that every level of collector will chase. No matter what other novelty rookie cards are out there, the core card of any new star is still his Upper Deck Young Guns rookie card.

It gives even a collector on a tight budget a way to get a hold of a “hot list” level card of the new stars and becomes a commodity that even the high-end collector needs in his set to be perceived as credible. So whether you are a kid collecting with your dad or the dad collecting for yourself; Upper Deck has you covered.

Kevin Wade is a devout Minnesota sports fan and writer for the hobby blog mojobeardy.wordpress.com. Kevin spends his free time collecting cards with his wife and kids. He has been collecting since the mid ‘80s and has a tendency to wax poetic about the late ‘80s/early ‘90s card boom.