Legendary® Encounters has always been about telling a story. That story could be about surviving Aliens™ or outrunning a Predator™, but they are all about the story. Since Legendary® Encounters: A Firefly™ Deck Building Game is based on a TV show the stories being told are the Episodes from the show. Instead of working through one big enemy deck as in previous Legendary® Encounters games, players will be completing a series of three Episodes.

While each Episode will contain the Enemies and Events pertaining to that Episode, players will also be mixing in special cards that represent additional missions that the crew of Serenity will need to handle. These Side Jobs can bring bonuses, like additional Credits, if completed or devastating effects if failed. 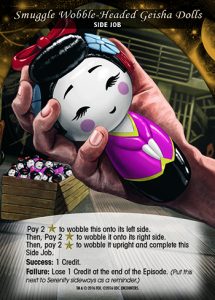 When revealed from the Episode deck, Side Jobs move along the ‘Verse just like an Enemy. Each Side Job will need to be completed before it enters the Combat Zone to gain it’s Success text. If not completed, players will then follow the Failure text on the card. 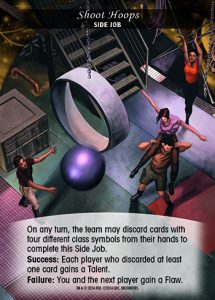 At the bottom of each Episode deck is an Inevitable Card. This new type of card acts as a time limit for the Episode. There are three different ones, and each one does something mean to the players if it reaches the Combat Zone. 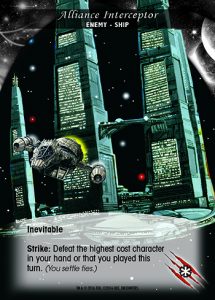