This expansion sees some of the MCU’s most powerful Super Heroes standing against the threat of Thanos and his Children, utilizing familiar and previously unfathomable keywords. Though some of these characters have appeared in past Legendary® expansions in some capacity, the cards here are all brand new. They build upon the cinematic feel of both the Legendary®: Marvel Studios Phase 1 core set and our recently released Legendary®: Marvel Studios’ Guardians of the Galaxy expansion, while also being fully compatible with all other Legendary® Marvel cards!

While we’re reminiscing, let’s take a look at a returning keyword that has no trouble working its way into this set. 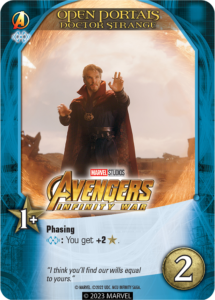 Phasing represents Heroes becoming insubstantial and moving through solid objects. Doctor Strange is well versed in such matters via his astral magic and use of portals, but it’s hardly the only means of becoming intangible…

During your turn, if a card with Phasing is in your hand, you may swap it with the top card of your deck. With this you can save a card for next turn, control what’s on the top of your deck, or just put your luck on the line and hope to draw the out you need. Phasing cards won’t always be immediately powerful in the sense you’d want to play them right away, but with some patience and planning they can be a powerful tool in any deck.

That sort of approach is only one powerset this expansion’s Heroes allow. Some of the Avengers’ heaviest hitters are here, and likewise some of their most multi-talented. That makes them perfect for… 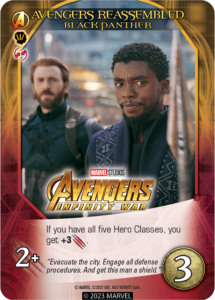 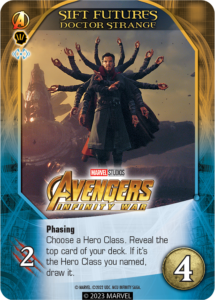 , that are active simultaneously. These make them great for triggering combos, and showing just how united the Earth’s Mightiest Heroes are in their darkest hours. Each Hero in Legendary®: Marvel Studios’ The Infinity Saga will have at least one Multiclass Card. Once again, Black Panther will showcase his omnidisciplinary skill set by having all of his cards as Multiclass!

That’s all for the opening act of this expansion, but look forward to more from Legendary®: Marvel Studios’ The Infinity Saga – if you can pay the price.