Yes, it’s true – Cinderella is proof that a pair of shoes can change your life. There are other shoes however that can change your attitude too. Recently I stumbled across a story about a teen who creates some special shoes that can make a difference for others. The image of the shoes first caught my eye, but as I read further, the young lady featured hails from my hometown of Wheaton, IL. I couldn’t believe it! This 16-year-old girl had somehow gotten the blessings of two charity foundations of the Chicago Blackhawks, and authorized her to paint the Blackhawks logos on shoes. I just HAD to know the story behind this, and more importantly, I just HAD to have a pair!

Liz Spurlock is just like any other 16-year-old High School Sophomore. She lives in Wheaton, IL and loves her hometown NHL team; the Chicago Blackhawks. She also enjoys concerts, playing year-round JV and beach volleyball, likes to read, hang out with friends, draw and paint, cook, take road trips, AND she is a very talented artist. She dreams of going to her first Blackhawks Convention soon and also visiting the Hockey Hall-of-Fame in Toronto. She just got her driver’s license last month and her first pair of skates last fall. She is now teaching herself to skate on both ponds and rinks. Her Grandma bought her a stick for Christmas and she is working on stick handling with a ball at her house.

Liz has tons of Blackhawks-themed clothes: hoodies, shirts, hat, PJ’s, sock, sweats, jerseys, sweaters and she thought about not having Blackhawks shoes. So she picked up a pair Black Converse hightops and emblazoned them with the Blackhawks “C”/tomahawks and feathers logo. As soon as she finished the shoes she painted for herself, her Mom posted a picture of them on a Blackhawks fan page on Facebook. A lot of people “liked” them and asked where they could get them. Liz’s Mom said she could paint shoes instead of babysitting to make spending money. She thought “Sure!” and that same night, they set up an email box and people started asking to buy them. She and her mom formed Kustom Team Kicks. 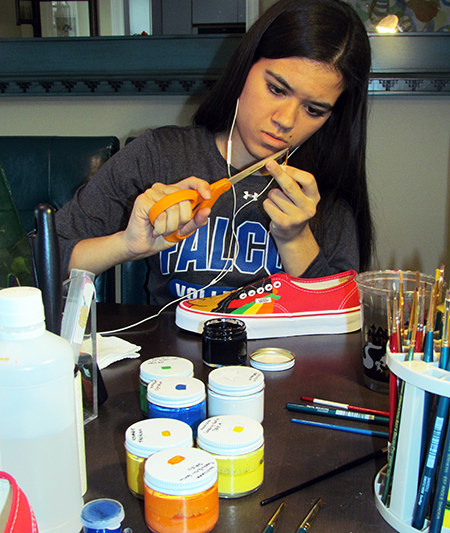 The rest happened really fast. First, a reporter from DNAInfo must have seen her Mom’s facebook post. He called and asked if he could do a story about Liz. They decided they would only do interviews if her charities were a part of the story. Then, Liz did a live WGN interview with Amanda Bickell on the Jonathan Brandmeier Show. Then WGN, NBC, and Comcast SportsNet did taped stories.

Liz teamed up with two charities – the Ross K. MacNeill Foundation (www.r33m.org) and the Bryan and Amanda Bickell Foundation (www.bickellfoundation.org) and donated a percentage of every shoe sale to these two worthy charities. Ross MacNeill was the little brother of a school friend who passed away at age 11 from brain tumor. Ross asked his family to promise that no other kid would go through what he did. His family set up R33M to keep that promise. Their goal is to end pediatric brain cancer by Ross’ 21st birthday in 2023. When Liz started KTK, she wanted to support R33M and also an animal charity. Liz’s family loves animal and has two dogs, three cats and a bunch of fish. She heard of The Bickell Foundation and did some research and loved the work they do. Plus Bryan is one of her favorite Blackhawk players. In addition to donating money from shoe sales, she donates shoes to both foundations for fundraisers. Liz does shoe auctions and raffles on her Facebook page to raise money for them, too. She and her Mom have also volunteered at events for both. 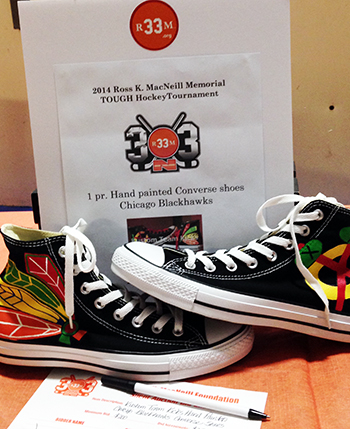 Liz also donates shoes to other related charities for fundraisers like Make-A-Wish, St. Jude, Animal Care League, Cancer Kiss My Cooley, The Aiden Manning Memorial Foundation, St. Baldrick’s, CASA DuPage, etc. She also paints shoes for kids who are battling cancer and donate shoes for fundraisers for them. Liz has “donated” 47 pairs of shoes thus far. It doesn’t happen often, but Liz likes when she gets to meet the pediatric cancer patient kids that she paints shoes for. Haley was in the hospital when Liz finished her shoes and Haley’s Mom asked if they could drop them off there. They got to meet them and visited for a few hours. They still keep in touch.

Liz met Stan Mikita at an R33M event. Liz’s Mom was wearing KTKs and Stan said he wanted a pair personalized with his number. Liz got to spend some time with him when they dropped them off. During the Hawks Convention last summer, people started posting pictures of Stan in his KTK shoes on the KTK Facebook page. He showed them off during his panel interview to the crowd. 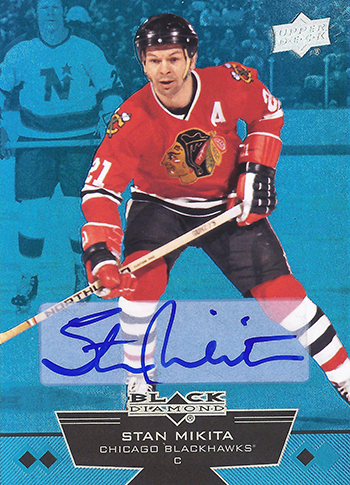 Her involvement with a Blackhawks charity has brought a great opportunity to meet players. Brian Campbell (now with Florida panthers) was the first player she met, when she was age 11. Now she has met Bryan Bickell, Andrew Shaw, Jonathan Toews, Corey Crawford, Marian Hossa, Ben Smith, Patrick Sharp, Daniel Carcillo, Scott Darling, Peter Marsh, Chris Chelios, Bobby Hull and Stan Mikita. She has an authentic ‘away’ sweater customized with “BLACKHAWKS” as the name. When she meets players, she has them sign it. Eventually Liz will have it framed and hang it in her Hawks bedroom.

It takes a minimum of 3 hours to hand paint a pair of shoes and she has spent up to 10 hours on more complicated pairs. She loves painting the Blackhawks logo saying, “He definitely has a certain expression and if anything is off, his expression doesn’t look right. I love painting the Hawks logos. Its fun whenever someone asks for something different–a different color shoe, a different design, adding a name or number, or the Stanley Cup.” 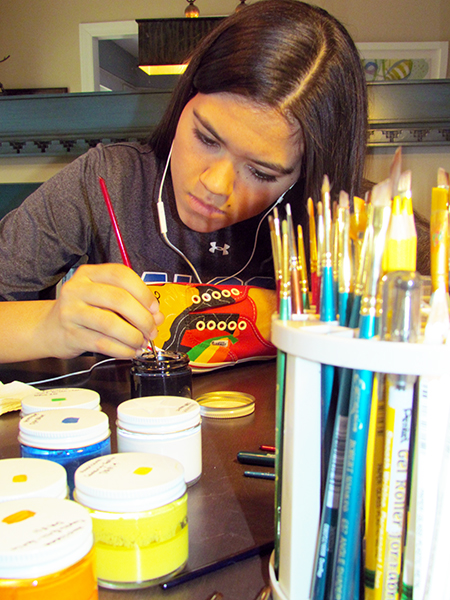 When Liz is in the moment, she is incredibly focused!

I had Liz customize my shoes with a “21” on one shoe, representing Stan Mikita’s number, and a drawing of The Stanley Cup with “1961” on the other to represent when Mr. Mikita won The Stanley Cup for Chicago. Anyone who knows me knows I have a love affair with hockey, am a die-hard Blackhawks fan, and have an extra special connection to The Stanley Cup. 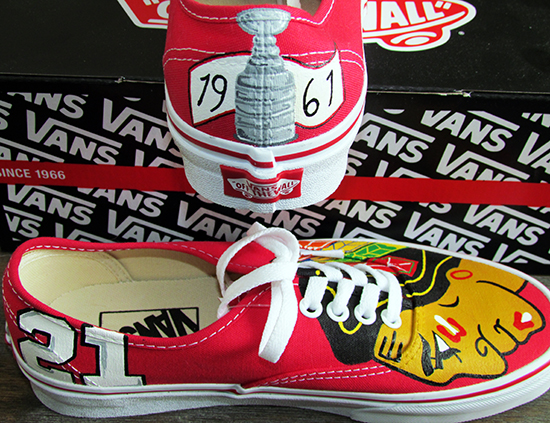 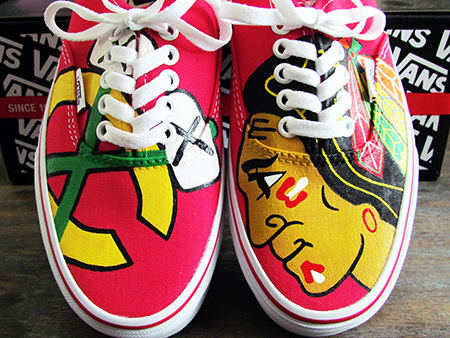 The waitlist to get your custom pair of shoes painted is about 10-12 weeks. Liz has about 40-50 orders to fulfill at the moment. I patiently waited for my shoes and LOVE, LOVE, LOVE them! Her Mom has someone working on her website right now, but you won’t be able to buy shoes off the website. Her shoes are more like art and they like to talk to customers directly to make sure they know all the options and get exactly what they want. They’re on Facebook, Instagram, and Twitter as Kustom Team Kicks. You can also reach them via email at kustomteamkicks@gmail.com. 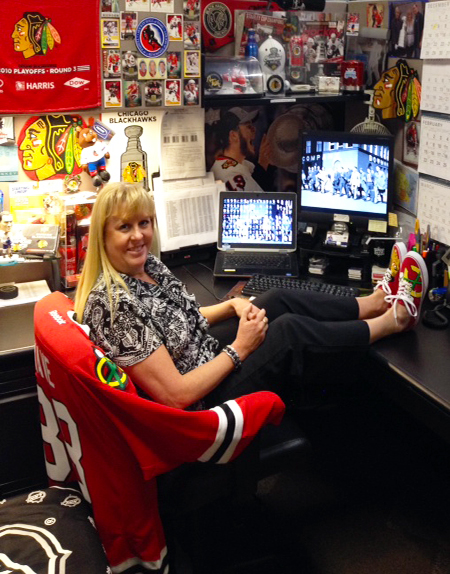 I am one happy customer who is thrilled with my pair of Kustom Team Kicks! Go Blackhawks!


How can I buy these? And how much are they? Need them!