If you’re active in the Overwatch League™ trading card scene, chances are you’ve had an interaction with Josh B. He’s the man behind the “OWTradingCards” Twitter, and helped create a fan-run discord server to help facilitate trades. He’s done a great job sharing the excitement of collecting Overwatch League trading cards, which is why he’s the focus of Upper Deck’s latest Collector Spotlight!

Josh started playing Overwatch during the public beta, which led to watching competitive Overwatch® as it started. When the Overwatch League was announced, he became a fan. Fast forward to mid-May 2019, when Upper Deck took esports to a new level by announcing the Overwatch League 2017-2018 Inaugural Season trading card release. Upon seeing those cards debut on Upper Deck e-Pack®, Josh decided, “Hey, this is going to be my thing.” After buying some cards and seeing friends talking about it on social media, he started a group on Facebook, a server on Discord, an account on Twitter, and then an account on Instagram. He wanted to help people find trades as well as share their amazing cards. 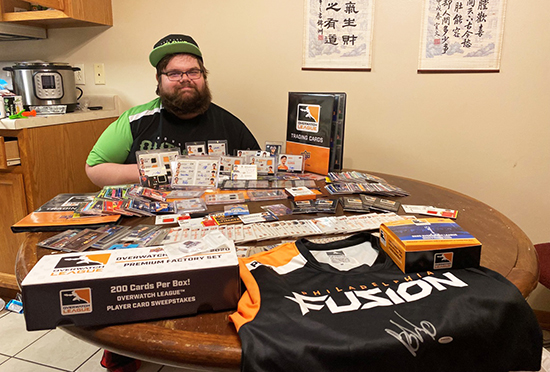 Josh has amassed an amazing collection of Overwatch League trading cards and memorabilia from Upper Deck.

“It’s such a unique community,” Josh said, sharing a story about how members of the Discord worked together to get cards of players to their parents who joined the server. When I asked him what his favorite part about the community was, aside from the ability to work together, it was about how organically everything came together. Everyone was excited about the Overwatch League trading cards and wanted to collect their favorites. While you may hear stories about toxicity in gaming, for the most part they’ve been able to avoid any of that within the Discord.  Everyone has been so nice and helpful to each other—like a family.

Josh has streamed a couple of box openings, most recently one with a box of the 2020 Overwatch League Series 2 cards that were released on May 20, 2021. As he opened packs, he would set some cards aside, noting that he would send those to other collectors from the Discord. The members all know what cards and players the others collect, and a number of achievements have been completed because of generous actions like Josh’s. 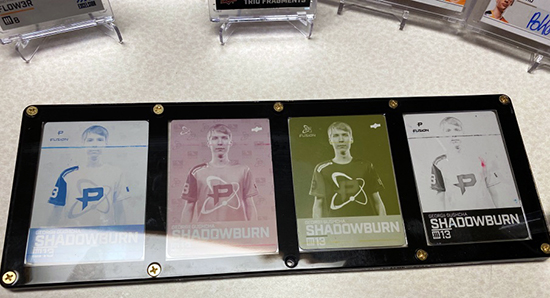 When asked about his favorite card in his collection, Josh named the printing plate featuring George “Shadowburn” Gushcha from the inaugural season Philadelphia Fusion roster. As one of his favorite players, and the reason he started playing Genji, the printing plate is a pretty unique piece to have. It was an achievement reward for being one of the first 125 collectors to complete a base Infra-Sight Variant set. Josh collects as many Fusion cards as he can, including ink and fragment booklets, and has a signed Poko jersey from completing achievements on Upper Deck e-Pack®.

At Upper Deck, we are happy to be able to help shine a spotlight on some of the amazing collectors in the Overwatch League community. Josh is one of those people who is always around to help and has quite the amazing collection as well. You can join the fan-run discord server Josh created and become a part of the family as well!

If you’re interested in joining the fun of collecting on Upper Deck e-Pack®, you can visit the STORE and also the TUTORIALS page to learn more on collecting, achievements, and redeeming cards!