(Win) nipeg and we’re in. That is the Jets’ mindset as they prepare for tonight’s match-up against the Colorado Avalanche.

Twice in the last three seasons, the Los Angeles Kings have raised the coveted Cup high above their heads in typical Kings fashion—sliding into the playoff picture virtually unnoticed and then turning on the afterburners. However, this time around just may be too little too late.

A loss by the reigning champions tonight and the streets of Calgary and Winnipeg will be rocking as both clubs will earn themselves playoff berths. The Calgary Flames last made a playoff push in 2009 but were quickly ousted by the Chicago Blackhawks. As for the Winnipeg Jets, a post-season bid could be significantly sweeter.

It is that time of week, everyone! As we continue our Throwback Thursday series, we time hop to the 1996 season, which was the last time Winnipeg saw a playoff game before falling in the quarter-finals to the Detroit Red Wings. That year was highlighted by the Jets’ first overall selection in the 1990 draft, Keith Tkachuk. The 2011 United States Hockey Hall Of Fame inductee most notably broke the 50-goal barrier in back-to-back seasons (1995-97) for the Jets. This year, the revamped Jets have been riding the coattails of Blake Wheeler and Andrew Ladd in the hopes that they can once again return the Jets to playoff form.

So let’s put up a throwback card and see if our fans can come up with some creative captions! Please share your comical caption to this card for a lucky fan’s opportunity to score 5 packs of 2014-15 O-Pee-Chee Platinum Hockey Cards! 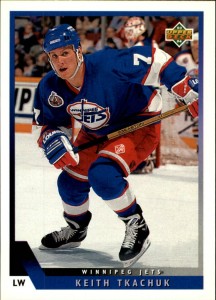 
Pass me the puck, I’m ready to go top cheddar


This card is on Throwback Thursday? Man, I feel old.


Oh My !! Playoff bound ? Time to do the jetty jetty shake.


“Mr. Photographer, make up your mind; Do you want me to lower my chin or raise my stick?”


Your telling me I can’t get extra butter with my popcorn?!?!


“Seriously, we’ve been out of the playoffs for longer than the Maple Leafs?”


Here come the playoffs. Watch out for the Winnipeg Whiteout!!


By the time I reach Phoenix


Coach says I gotta keep my eyes on the prize!


What do you mean we are moving to Phoenix? Do they even have ice in Arizona?


Tkachuk with the big body Tkacheck in to the boards


Hey guys, follow me because we’re finally on the way back to the playoffs for the first time since relocating. Hope to see you all there!


How much chuk can a Tkachuk chuk chuk? Don’t really know, but he could score!


“what’s the score in the Penguins game?”


Congrats to Jacob F.! Your witty comment scored you 5 packs of 2014-15 O-Pee-Chee Platinum Hockey Cards. Thanks to everyone for participating and we look forward to seeing your comments again soon.