The Hobby Collectibles Impact of Connor McDavid in Edmonton

“The Great One” has spoken and he has given his nod of approval to the latest “Next One,” Connor McDavid.

Expected to go first overall in the 2015 NHL Entry Draft, the hype on McDavid has been around since he made his major junior debut with the Ontario Hockey League’s Erie Otters back in 2012-13 and there is little doubt that he will be playing for the Edmonton Oilers this fall. 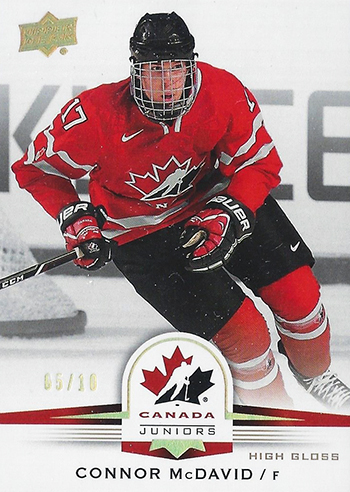 In a recent interview with Jim Matheson of the Edmonton Journal, Wayne Gretzky gave his thoughts about who he called “clearly a franchise player” and said that McDavid is “the best to come along since (Mario) Lemieux and (Sidney) Crosby.” Without being under constant media scrutiny in a small market and playing alongside some of the best young players in the game, McDavid is certain to have plenty of room to develop and possibly evoke memories of the team’s glory years that saw them win five Stanley Cup titles over a seven-year span. 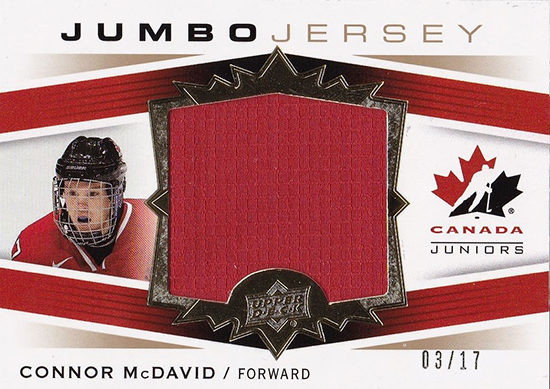 The past 10 seasons have seen a once-great Oilers organization go into a steady decline. McDavid will be their fourth top pick in the past six years and the team has not made the playoffs since losing in the Stanley Cup Final to the Carolina Hurricanes back in 2005-06. Fans are hopeful that the promising core of players will be able to come together and return to the postseason.

Destined for hobby superstardom, McDavid has already been featured in his national team uniform in 2014-15 Upper Deck Team Canada Juniors and his autograph and patch cards from have been hot sellers on the secondary market. While there is already a great deal of anticipation for his Young Guns card that is expected to appear in 2015-16 Upper Deck Series One, he will likely be the subject of the First Overall Pick Redemption card slated to appear in packs of 2015-16 Upper Deck MVP. 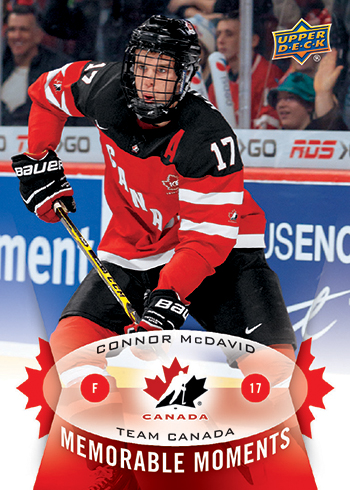 The hype of McDavid is decidedly different than the last generational player, Sidney Crosby of the Pittsburgh Penguins. Back in 2005, social media was in its infancy and finding video online was much more challenging as YouTube had barely begun to take off. Today, there is an incredible amount of discussion among fans and hockey media about McDavid and despite the incredible amount of hype, the young prospect keeps a level head. 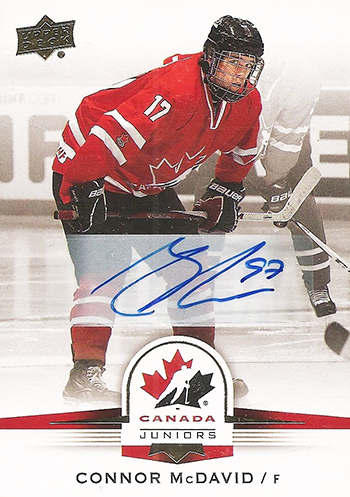 “If you worry too much about the hype, nothing’s going to happen for you,” said Otters teammate and fellow prospect Dylan Strome. “I know if you ask Connor, he’s probably the best in the world at not looking at hype and not getting too hyped up over anything. Obviously, he’s a pretty high profile player and I think he’s one of the best in the world at not listening in to what other people are saying.”

While it is difficult to predict exactly how much of an impact McDavid will have on the hobby values of his teammates, the possibility that the Oilers will gain more exposure may help some of them gather a stronger following. It would be unfair to place strong and unrealistic expectations on McDavid during his rookie season as an instant transformation from a basement-dwelling club to a playoff team is difficult. Should the Oilers add some strong free agent talent, bolster their defense corps and strengthen their goaltending, it could happen; but the reality is that an instant transformation into a contender is unlikely. However, they have an incredible pool of talent that may come together and turn the franchise’s fortunes around. 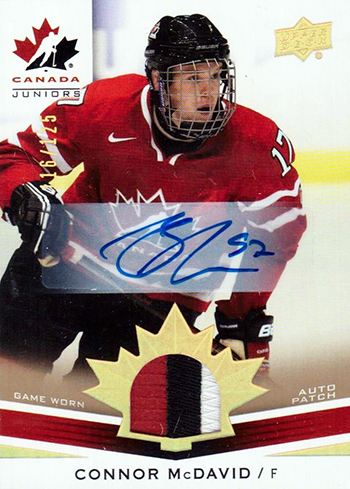 Which players could benefit the most from playing with McDavid and turn into bigger hobby stars as well? Consider the following veterans and prospects that are all presently under the age of 25: 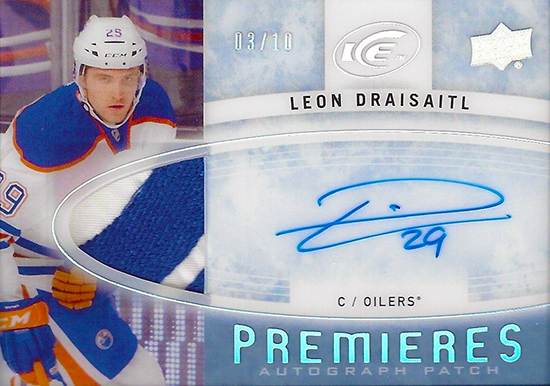 The third overall pick in the 2014 NHL Entry Draft, Draisaitl had a rough start in Edmonton and was sent back to the Western Hockey League after recording just nine points over 37 games. Instead of returning to the Prince Albert Raiders, he was traded to the Kelowna Rockets and his offensive talents produced a remarkable 53 points over just 32 contests. In the playoffs, he has kept up a strong scoring pace and could presently be considered a bargain for collectors wishing to do some prospecting. 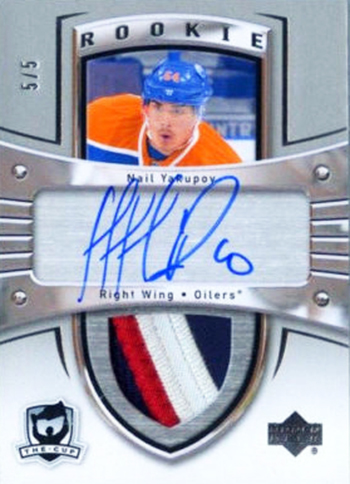 Yakupov just completed his third NHL season in 2014-15 and the first selection in 2012 had a rough start which sparked several trade rumors. Luckily, he took came out of his offensive shell after the All-Star break with nine goals and 21 points. His first cards in an Oilers uniform hit the market in 2013-14 and the performance of other young stars caused the demand for his cardboard to soften. If he ends up on a line with McDavid and his production finally reaches star-like levels, be sure to grab some bargains before his value skyrockets. 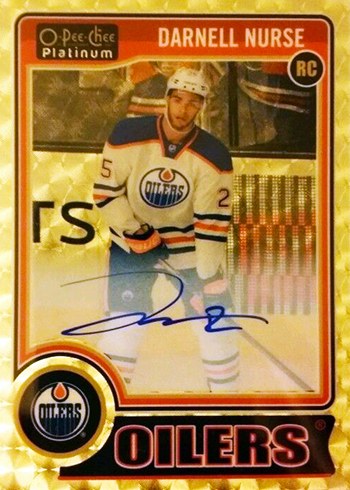 One of the criticisms directed at Edmonton management in recent years is the fact that they have not drafted enough potential elite defenders. For the most part this is true, but if Nurse continues to develop into a top talent, their scouts will breathe a sigh of relief. The nephew of former NFL star Donavon McNabb, he is a gifted athlete with great size and the ability to turn the momentum of a game around with a big hit. The Oilers have taken their time with him, but he appeared in two games this season and earned the right to appear on his first Upper Deck cards. 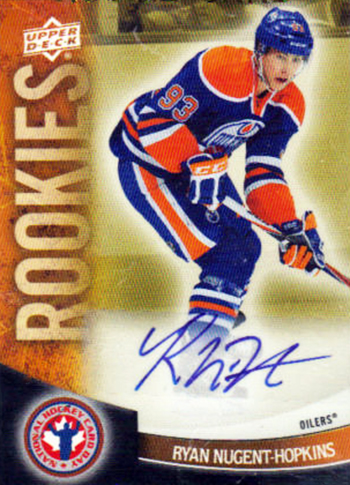 Nugent-Hopkins had a great start with collectors when he finished second in voting for the Calder Trophy back in 2011-12, but the sophomore jinx stalled the former first overall pick’s journey to becoming a hobby star. Over the past two seasons, however, he has remained one of Edmonton’s offensive leaders and he notched a career-high 24 goals in 2014-15. 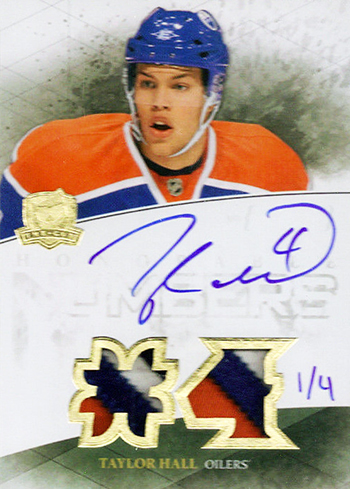 Hall’s progression into one of the NHL’s elite has been steady since his debut back in 2010-11. He has handled the pressures of being a first overall pick better than many despite battling the occasional injury and came close to making the league’s Second All-Star Team on two occasions. In 2013-14, his 80-point effort made more collectors take notice and he could potentially see his values grow if he ends up on McDavid’s left side in October. 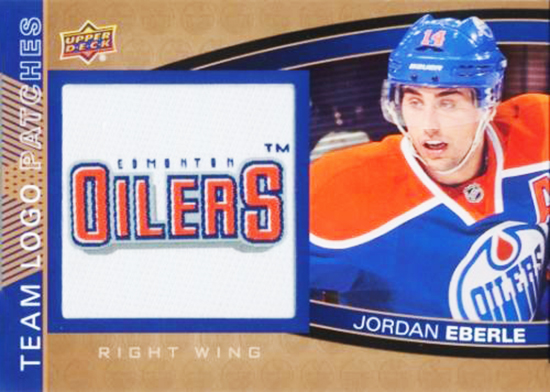 The elder statesman of the group, Eberle has been a fixture with the Oilers for five seasons and has been one of their few bright spots. His best effort to date came in 2011-12 as he finished second in voting for the Lady Byng Trophy and recorded a career-high 76 points. The hobby certainly has a lot of respect for him, but the demand for his rookie cards is not what it used to be. If playing on the same team as McDavid can change that remains to be seen, but he is certainly a star worth taking a chance on since he has yet to reach his prime. 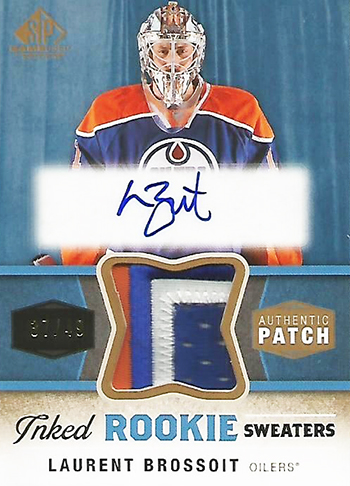 Goaltending is an area the Edmonton Oilers clearly need help with and they may have found a future star in Laurent Brossoit. This second round pick for Calgary has shown steady improvement over the last few years primarily with the Edmonton Oil Kings in the WHL. He made the most of playing with the team in the last game of the season against the San Jose Sharks where he stopped over 50 shots. Oilers defenceman Curtis Hamilton said of the performance, “He was tremendous. That’s probably the best game I’ve ever seen him play.” His cards can be found now at very reasonable levels. 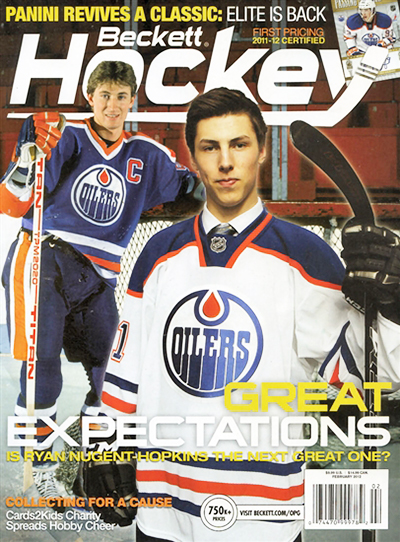