Last week Upper Deck made headlines when the company announced they were creating a “Star Rookie” trading card for Jack Hoffman. Jack is the inspirational 7-year-old who also made headlines with a memorable 69-yard touchdown run in the spring game for  The response we received was far greater than Upper Deck and the Hoffman family ever imagined and one thing became very clear, it seems like everyone wants a Jack Hoffman “Star Rookie” card.

Upper Deck has been very careful about the types of collectibles we are creating as to not risk jeopardizing Jack’s amateur status and future ability to play college sports. We only felt comfortable producing a digital version of the card and some blow-ups that Jack could sign and use for charitable purposes. However, based on the groundswell of interest from fans looking to have an actual card of Jack for themselves, it became clear we had to do something more. 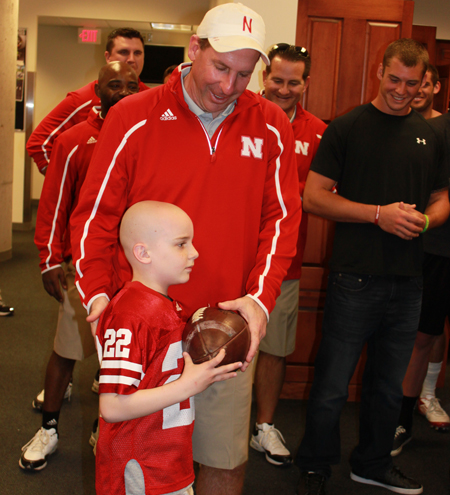 Upper Deck worked in concert with the Hoffman family and the University of Nebraska to come up with a way we could create traditional collectible card of this inspirational young man. Based on those discussions Upper Deck has been given approval to create a 5×7 version of Jack’s Upper Deck “Star Rookie” card that will have his stats, information about the “Team Jack” charity and his story.

And the copy on the back of the card will really be his story. Jack Hoffman sat down this weekend to write the copy for his first-ever trading card out himself.

In my discussions with Jack’s father Andy, I shared we could have one of our copy editors write the back of the card or possibly open it up to let fans write the copy, but it felt wrong. Who better to tell their story than the athlete himself? This is the first time to my knowledge Upper Deck has allowed an athlete to write the copy that would appear on the back of a trading card, and in this instance it feels right.

So to all the fans of Jack Hoffman, the Nebraska Cornhuskers, college football and inspiration in general who have contacted us this week, the good news is that collectible trading cards of Jack are coming and will likely be completed soon. Upper Deck will be donating all these cards to Jack’s family to be used to help the charity so PLEASE make sure you “like” the “Team Jack” Facebook page so you can find out more details on how to get your 2013 Upper Deck Football Jack Hoffman “Star Rookie” card! More on this story came from ESPN today:

Additionally, to keep awareness going for “Team Jack” and his first-ever trading card coming to fans soon, Andy Hoffman would like to request that for the next week fans change their profile pictures on Twitter and/or Facebook to Jack’s “Star Rookie” card shown below (You can right click on the image to save it and then use it for your profile picture). If people ask you about Jack, tell them his inspirational story of hope. And by increasing awareness, hopefully we can find a cure for pediatric brain cancer. 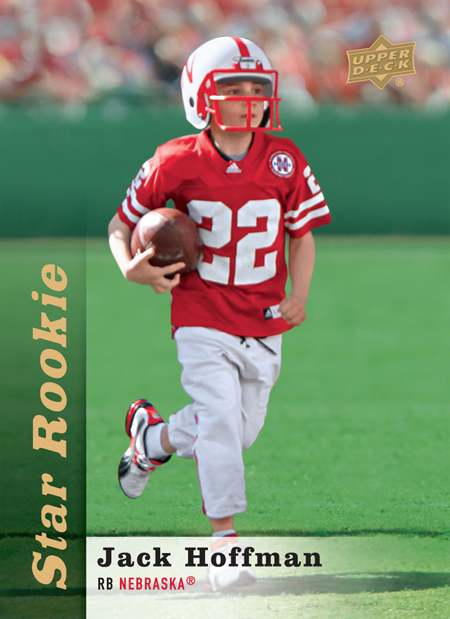 
Kudos, Upper Deck. Your heart is in the right place. Thanks for this very kind, selfless gesture.

That said, how do I get one of these?