Brag Photo: No Fooling! Upper Deck and Reggie Jackson are Together Again!

Upper Deck is thrilled to be back in the baseball business as we have previously announced. And besides working on deals with active stars of the diamond, Upper Deck has been locking up legendary players like Mark McGwire, Mike Schmidt, Nolan Ryan and Tony Gwynn to autograph deals for new baseball trading card releases.

One legendary player however has very strong ties to the Upper Deck brand going back to the company’s start has been missing from products as of late. He appeared in commercials for Upper Deck and was a spokesman doing appearances for the company back in the day. And now Upper Deck has been able to secure a new autograph deal with him to appear in upcoming baseball releases. We thought it only fitting on Opening Day at so many parks throughout the U.S.A. we share Reggie Jackson will be back in Upper Deck trading card sets including autograph cards.

Take a look at one of Reggie Jackson’s first signed trading cards as a part of the new agreement that can be found in 2013 Goodwin Champions. He will also have autograph content in the first core baseball release in 2013 Fleer Retro Baseball. We look forward to another long and fruitful relationship with this iconic baseball legend. 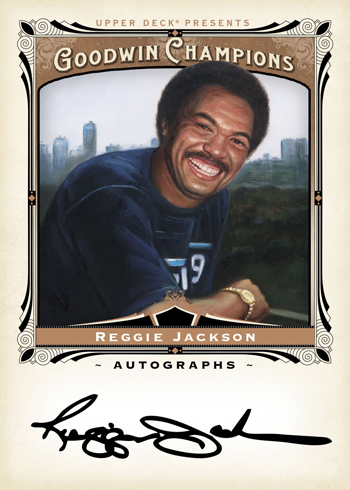