We have been saddened to lose some good friends recently. A couple weeks ago we remembered some NHL players who we had lost in the offseason here on the blog, but we have also lost some really amazing football players as well. As we work with athletes to bring their collectibles to market, we obviously build friendships and to lose these partners is difficult. We wanted to pay tribute to two great football legends we recently lost that will definitely be missed. Rest in peace dear friends…

Bubba Smith was a terror on the gridiron earning All-American honors twice at Michigan State as a defensive end. He played nine years in the NFL and was in Super Bowl III and V. Because of his huge size, he was routinely called on to block two players and he was named to two Pro Bowls. Off the field however he was seen as a gentle giant who starred in a variety of movies. We were working with him on some upcoming sets and he actually had a small handful of cards to be signed with him when he passed. For any fans who pulled one of those redemption cards from 2011 Sweet Spot Football, we are working on coming up with a comparable item which is a little difficult since he was such an incomparable guy. We hope you enjoy some of the cards we produced of this larger than life personality. 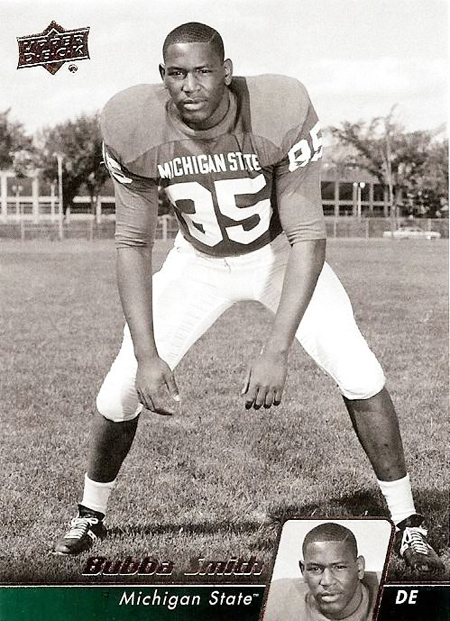 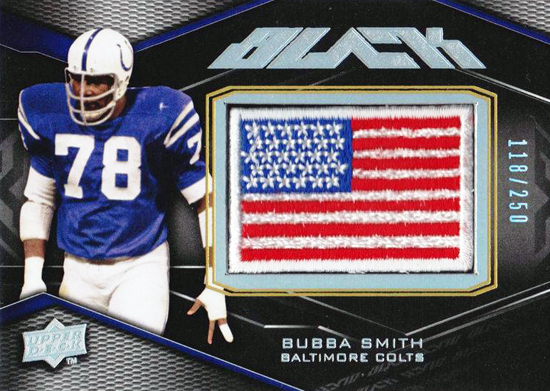 Lee Roy Selmon was the youngest of nine children and when it came time to head to college, he joined his two brothers Lucious and Dewey Selmon at the University of Oklahoma. Lee Roy became a star in college helping the Sooners to National Championship runs in 1974 and 1975. Barry Switzer called him the best player he ever coached. He was the top draft pick in 1976 becoming the first player ever drafted by the Tampa Bay Buccaneers. He went to six straight Pro Bowls and was named the NFL Defensive Player of the Year in 1979. He is a NFL Hall-of-Famer and was the first person inducted into the Tampa Bay Buccaneers Ring of Honor. We were working with Lee Roy on a few projects including the upcoming 2011 Upper Deck University of Oklahoma set. Lee Roy actually returned some autographs to us prior to his passing so we feel including his signed cards into this set is a great way to honor his memory. We hope you enjoy taking a look at what will be some of Lee Roy Selmon’s final Upper Deck signed cards. 
Thanks for sharing these images. Def sad. They will be remembered through UD cards and around the NFL and their fans.