Make this the Weekend You Visit Toronto!

I’ve said it before and I’ll say it again: The Sports Card & Collectibles Expo in Toronto is always one of my favorite shows of the year. Yesterday we announced details about our plans for the Expo, but for me there are tons of other reasons to attend. If you have never been before, make an effort to come as you will not be disappointed. And for everyone who is attending, I thought I would share my Top 10 list of reasons why I am excited for the 2011 Sports Card & Collectibles Spring Expo: 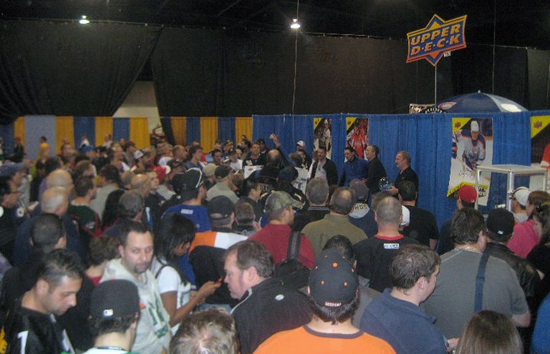 The Sports Card and Collectibles Expo in Toronto is awesome and there is always LOTS of excitement around the Upper Deck booth!

#10 – The Beef Jerky guy – Yes, that is right. There is a vendor at this show that actually specializes in slinging dehydrated, seasoned beef. It’s fantastic. Frequently I’m walking around the show and I’ll catch a whiff of these salty sensations and it makes you just say to yourself, “What the heck was that?” Well just make your way over to the Beef Jerky guy and find out, you’ll be happy you did. 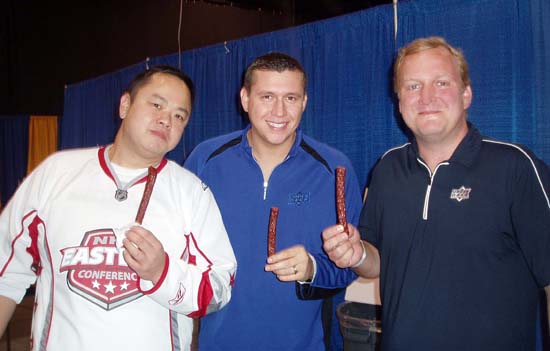 #9 – The NFL Draft – There have been all sorts of legal shenanigans going on between the NFL owners and the players. Who knows if there will be a season at all next year, but we know there will be a NFL Draft. I’m excited to check it out in the Great White North where there actually is a fairly good following for American Football. It should be fun to watch and find out if Cam Newton will go No. 1 while seeing how Toronto fans react to the Buffalo Bills picks.

#8 – Showing off EVOLUTION – Speaking of football, I’m excited to share our EVOLUTION trading cards with collectors at the Expo. These are definitely different types of cards that many in the hobby will not be huge fans of, but to the casual collectors and sports fans in attendance, it will be fun to watch their reactions. Autographs and game-used memorabilia cards are definitely a huge draw in the hobby, but for UD it is important to develop these innovative new types of cards that get people talking around the water cooler and hopefully draw in new or lapsed collectors to the category. Watch what some fans had to say as they saw EVOLUTION for the first time at the Final Four:

#7 – The NHL Playoffs at the Keg – Usually at least one night we hit up the Keg and enjoy a full slate of NHL Playoff games (which have been fan-freaking-tastic so far), some great cuisine and drinks. It is great to meet up with other collectors and sellers from the show there to enjoy the NHL action while also talking about the events of the day from the show. For me hockey is just better when you are watching it in Canada around knowledgeable, passionate fans.

If you are heading up there and enjoy a good steak, let me also recommend Black Angus which is another one of my favorites. It’s a little far away from the hotels around the show, but it is worth the trip. I should note that this restaurant is NOT like the Black Angus we have here in the states.

#6 – Meeting the Stars – The team at AJ Sportsworld always do a great job of bringing in some great athletes to the Expo. This year I’m looking forward to seeing Mark Messier and Bobby Hull in particular. In years prior I have been lucky enough to meet players like Mario Lemieux, Gordie Howe and Bill Gadsby. It is always a lot of fun to get to meet such amazing players and find out they are just as good off the ice as they are on it! 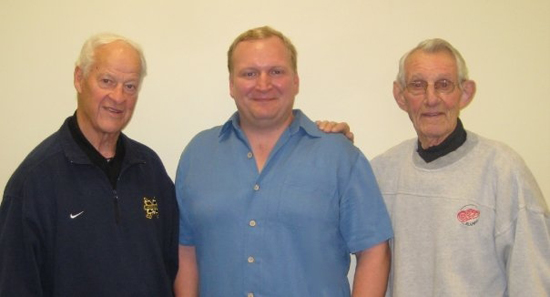 Crossing paths with Mr. Hockey and Bill Gadsby is about as good as it gets for a hockey fan!

#5 – UFC 129 at Arizona’s – Very close by many of the hotels around the show is a bar called Arizona’s that seems to draw many in from the show each night. The UFC is planning on taking over Toronto that weekend with their premier event taking place on Saturday night. Unfortunately I don’t think I can score tickets to UFC 129, but I’m sure it will be a lot of fun watching the great card of fights at Arizona’s with others in the industry.

#4 – Time with Customers – I fly out for the show on Thursday so I can spend Friday morning with our Canadian Sales Manager, David Vatri, visiting shops in the Toronto area. It’s great to see how things are going with them; you can learn a lot from just listening to those who are representing your products every day. It’s also great to get to do that at the Expo. Upper Deck will have a booth where we will have several members of Upper Deck’s staff on duty to answer questions customers may have and share exciting new information about upcoming UD products and programs. 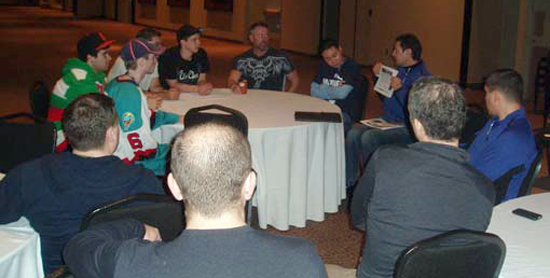 One of my favorite events of the weekend is a private meet-and-greet where we get to spend some time with collectors and share what we have in store for new product launches. It is an excellent opportunity for us to get some great feedback from a great core group of fans in a quiet environment away from noise of the show. For their time and feedback, attendees will be awarded with a complimentary MMA autograph card from a recent Upper Deck product, playing up the fun of UFC 129. This event will take place on Saturday, April 30, at the Expo from 3:00 to 4:00 p.m. We still have about 10 spots remaining so if you are interested in taking part, please email us at upperdeckmarketing@upperdeck.com. We’ll all meet at the Upper Deck Booth at 3:00 p.m. on Saturday and then walk to the meeting room together from there. With Grant Sandground, UD’s NHL product manager sharing some great tidbits on new products, this is really a way for us to pull back the curtain on what we do and let our fans in on the process of making card sets.

#3 – California Sandwiches – If I go to Toronto and don’t visit California Sandwiches at least once, I leave the country VERY upset. I live in California, and I can say without a doubt I have never had a sandwich like this out here. Now I’m not going to say these Italian delights are necessarily good for you, but I do know they taste really good. My personal favorite is spicy veal, but make sure to get out there before Sunday as most locations are closed that day. 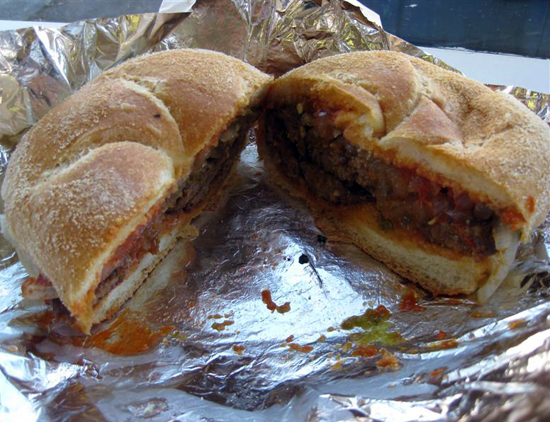 You had better put your cards away if you are going to attempt to handle an delicious Italian treat from California Sandwiches, they can get a little messy!

#2 – Pulling the Winning Ticket – One of the most important reasons for this trip for Upper Deck is to be able to give back and thank all the customers who have been supporting our product lines all season long. We do that by having a daily raffle where we give away a variety of great items to fans in attendance. And wouldn’t you know it, I get to be the guy that pulls the winning ticket from the bowl. It is so much fun to slowly read the numbers, watch the anticipation in people’s eyes and then draw the winner. Check out this video where a fan goes crazy after winning a tin of UD’s ultra-premium product, The Cup: http://www.facebook.com/pages/Upper-Deck-Entertainment/147393155320725?ref=ts#!/video/video.php?v=462503997122

On Sunday we usually start to giveaway some of the larger blow-up cards that are in the booth. It’s a lot of fun to see fans walking away with these giant Upper Deck cards that will soon be hanging on their walls or sometimes in their local hobby shop. We will have information about the daily raffles at the Upper Deck booth so make sure to stop by to check that out. 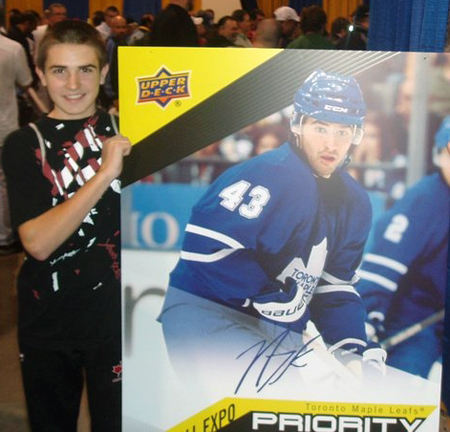 This young man was thrilled to be able to take home an Upper Deck blow-up card almost as big as him!

#1 – The Priority Signings Wrapper Redemption – When you are giving away amazing autograph cards of players like Sidney Crosby, Wayne Gretzky and Gordie Howe to name a few, just for opening a box of cards at our booth, you had better believe people will be lining up for that. And that is how it goes each day of the show where a long line of collectors forms for the opportunity to get their Upper Deck Priority Signings autograph card. The group reminds me of the characters from the movie “Cannonball Run” where all the racers are just chomping at the bit for the green light so they can step on the gas, open their packs and be the first to claim victory. It really is a lot of fun!

Along the way they tend to pull a variety of great items from their boxes so it is always exciting to see collectors whose hands are shaking because they cannot believe the amazing Upper Deck card they just pulled. We keep the camera handy so we can document all the awesome pulls from the weekend. So what are you waiting for? Don’t be left out, it could be you that has the big pull this weekend! Below are the details on the wrapper redemption program along with the checklist of players included:

Collectors can open one sealed box of either 2010-11 NHL SPx, NHL SP Authentic or NHL SP Game-Used products at the Upper Deck Booth and receive one Priority Signings card in exchange for their empty wrappers. There will be a limit of one redemption card per person, per day, while supplies last. All card packs must be opened at the Upper Deck booth in front of a company representative. These cards are ONLY available during the giveaway times posted and the promotion may end earlier in the event stock on these cards has been exhausted. This promotion is only available during the following show times:

All of the autograph cards listed above will be limited to 75 copies or less and they will be serial numbered on the front. It should be noted that some players marked with a * will have one, and in some cases two, parallel versions of their cards featuring a different photo and numbering that is much more limited. Below is an example of a Wayne Gretzky Team Canada parallel autograph card from the set. 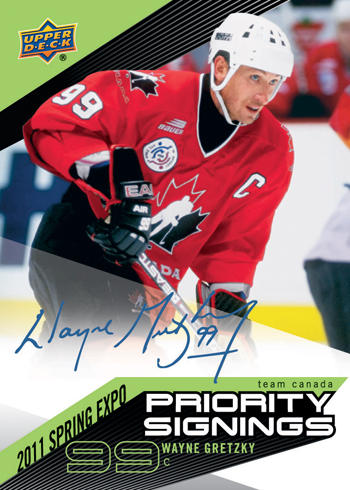 Looking for the "Great One?" Look no further! Wayne Gretzky only signs Upper Deck trading cards!


I live in Myrtle Beach,SC , would love to be there, but it would cost entirely to much for me. Wish there was some sort of online interaction or something for the people who want to be there,but can’t afford the travel expenses.