Getting the President’s Signature of Approval

A funny thing happened last night as I watched President Barack Obama start to make his way through the U.S. House Chamber at the Capitol after delivering his State of the Union Address. He stopped to sign autographs. Lots of them. The NBC-TV cameras kept rolling as anchor Brian Williams and political pundits David Gregory and Andrea Mitchell discussed the President’s speech, all the while showing Obama shaking hands and signing autographs over the next seven minutes. 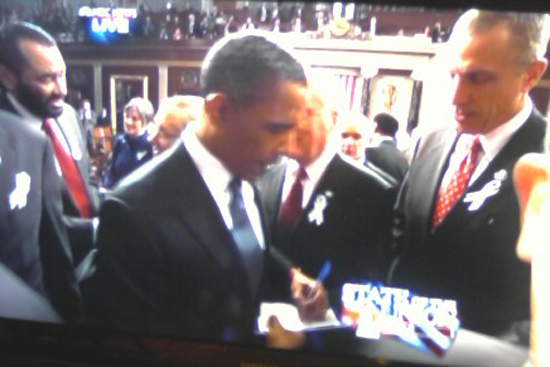 LEFTY: The President was diligent about signing his John Hancock for each of the autograph seekers.

Being in the business of autographs – you can’t help it when you work for a company like Upper Deck – I found myself transfixed to the flat screen even more so now than when he was delivering his 60-minute download to the nation regarding health-care reform, the war in Iraq, and his heartfelt shout out to shooting victim Congresswoman Gabby Giffords of Arizona. I was so excited that I even took a couple of quick pictures (screen grabs) with my cell phone to capture the moment.

I was watching the President of the United States get hounded for his sig. It’s something we’ve sort of cornered the market on at Upper Deck Authenticated (UDA) with our patented five-step authentication process. But here I was watching President Obama sign his John Hancock for everyone from congressmen to interns, aides to senators. And of the 28 different people (19 men and nine women) who asked Obama for his autograph during his stroll across the chamber floor, he kindly obliged every one of them – with one exception. 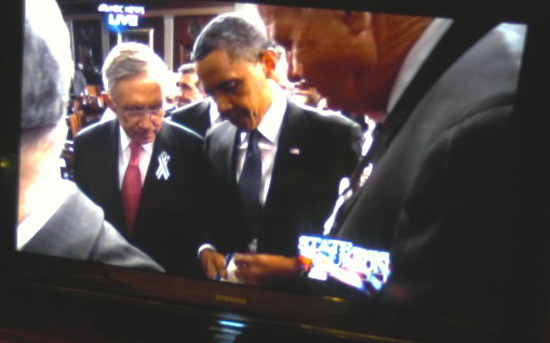 PLEASING THE MASSES: A total of 28 different people asked the Prez for his autograph last night.

An elderly man – let’s call him Autograph Seeker No. 16 – stood patiently with an oversized folder nestled in his arms. As Obama approached, he quickly opened the folder and produced a black Sharpie for the Prez to use. Inside the folder, behind a loose paper frame, was a color photograph that appeared to be a shot of the man’s family taken at what was likely a state dinner-type affair. Obama took the black Sharpie in hand but seconds later waved off the autograph request. He said something to the effect that he could not sign this particular photo, but I wonder why? Maybe the President of the United States has his own set of rules when it comes to autograph requests. In fact, I’m sure he does.

But to make it up to the man, in true Obama fashion, he signed a pair of State of the Union program copies of his speech. That was the only item, in fact, that Obama did sign for folks during this particular jaunt. Everyone seemed to have this folded pamphlet in hand. Autograph Seeker No. 16 seemed satisfied despite getting rejected on his initial request.

Two minutes into his march toward the exit door, the first autograph seeker asked Obama for his signature. For the next five minutes, the President of the United States turned into Mickey Mantle. Or Michael Jordan. Or LeBron James. He signed steady ball-point pen signatures for anybody who asked. And he did it with a smile.

Maybe UDA should go after signatures of the President? What do you think? And guess whose signature is the most coveted in the private autograph collection of Upper Deck exclusive spokesman LeBron James? The video clip below reveals the answer.


I believe the photo he would not sign was the one of all living president in the Oval Office. There had been stories that the president each signed a certain number of those photos and agreed not to sign any others.


There is not a President, alive or dead who’s autograph I would ask for. They are public employees,operating as puppets for Big Unions and Big Biz. Obama is no better than anyone else, and to put these politicians on a pedestal is the reason they all feel superior to the average working American. I would’nt so much as shake hands with any of the politicians in office today. Thieves with neckties and briefcases, that’s all.