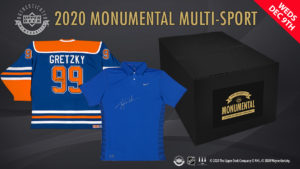 Mark your calendars for Wednesday, December 9th with the return of Monumental Multi-Sport – the oversized blind box product that contains an incredible 5 pieces of authentic memorabilia, including items from Upper Deck exclusive athletes!

2020 Monumental Multi-sport boxes will be sold exclusively on UpperDeckStore.com starting December 9, 2020, at 10am EST and limited to one per household.

Now is your chance to #BecomeMonumental and quickly grow your collection without breaking the bank! Previous releases have sold out, and with the holidays in full swing, these boxes are expected to go quickly.

Monumental gives you the rare opportunity to find multiple exclusive pieces from top-tier athletes from every sport ranging from basketball and hockey to golf and football in these oversized blind boxes.

Be on the lookout for rare boxes featuring:

@UpperDeckSports WoW 🤩 Thank You 🙏🏻…I have just opened the best box of my life!

Check out Lucas’ pulls from what he calls the “best box [he has] ever opened!” when he received five autographed pieces from Tiger woods!

@UpperDeckSports WoW! I was lucky enough to grab a monumental box before they sold out! Best box I have ever opened!

Watch a collector in awe of the Tiger Woods autographed pin flag he pulled, which he almost bought on UpperDeckStore.com.

So make sure to get your Monumental box early, as we don’t expect the limited release to be in stock for long. Visit UpperDeckStore.com starting December 9, 2020 at 10am EST/7am PST.

Are these all shipped from the US? Or is there an allotment in Canada for Canadians? My main concern is whether or not I would be charged through the roof on customs/duties charges