2010 Comeback Cards of the Year

For collectors it can be very depressing when a rookie you speculated on to be the next big thing just doesn’t pan out right away. What can be even worse is when a veteran star you are heavily vested in gets in trouble and the values on their cards drop like politicians approval rating after a scandal.

But every once in awhile these players can make a comeback where you are just thrilled you didn’t give up on them and race to find their cards you had thrown in your common pile. This year we have seen some great comebacks in the sports card market and we wanted to profile the biggest ones here for you: 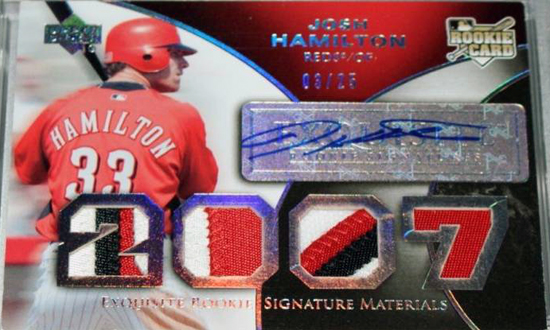 Recovering from addiction and injury, Josh Hamilton has become an amazing success story

Josh Hamilton has been considered a comeback player a variety of times throughout his career. He couldn’t have been hotter than he was in 2008, especially after the show he put on at the Home-Run Derby at Yankee Stadium, shattering Bobby Abreu’s first-round record by hitting 28 homers. As of late he has been hampered with injuries, but he has persevered and helped to lead the Texas Rangers to an improbably World Series appearance this year. He was named the 2010 AL MVP and the future remains bright for this tremendous story of redemption. Collectors have taken notice and you can find his 2007 Exquisite Collection Quad Patch Autograph Rookie card selling in the $175-$250 range based on the quality of the card and patch. 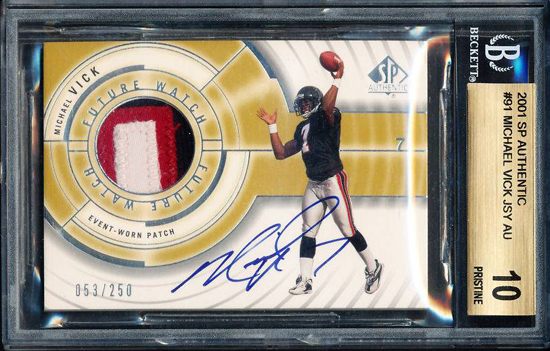 The values on Vick's RC cards plummeted when he went to jail, but with his amazing resurgence, his cards are going for top dollar once again

Most football experts expected Michael Vick to return to the NFL and maybe be a quarterback that could come in for a few plays a game running the Wildcat. Some even thought he may come back and return punts and kickoffs. Nobody expected him to come back and not only be as good as he was with Atlanta, but better. His cards went as low as they could go, but have bounced back to even greater heights than before. Recently, his 2001 SP Authentic Autograph Rookie Patch card sold on eBay for a whopping $4,550. Beckett price guide lists this card with a value of $750 currently, but if you held on to this card and it is in great condition with a multi-color swatch, it will likely bring much more today. 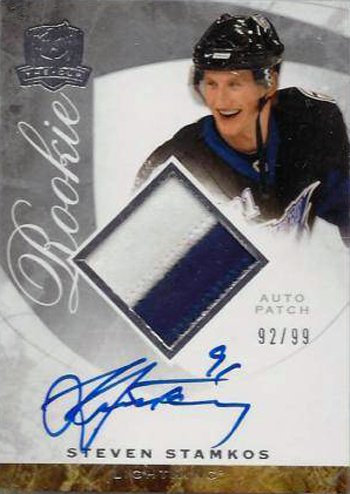 After getting off to a low start his rookie season, Stamkos has been the man in Tampa Bay ever since

Steven Stamkos was hailed as the next “Great One” and just did not live up to the high expectations surrounding him during his rookie season. Collectors dumped his cards, not realizing the breakout performance he would have during his sophomore season and he hasn’t shown any signs of slowing down yet. One of the biggest frustrations hockey collectors have shared with us this year is how depressed they are that they sold/traded their Stamkos rookie cards early, fearing he would never be able to live up to the hype. Now you can’t get near his rookie cards without paying a high premium. The best rookie to have of Stamkos is no doubt his 2008-09 NHL The Cup Autograph Patch Rookie card that routinely sells for over $1000. 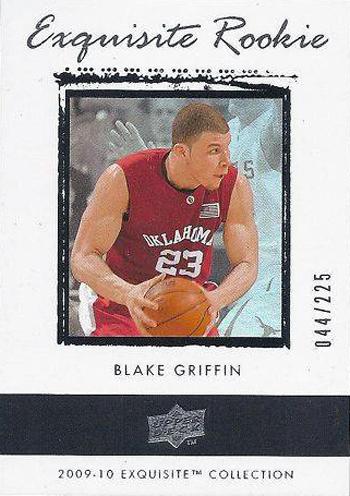 Missing his rookie season and worries of the "Clippers curse" scared many collectors off, but now that he is healthy, the values on Griffin's cards are soaring high again

Blake Griffin was thought to have been just another victim of the Clippers curse, but who would guess he would bounce back from missing his entire rookie season to become a human highlight film? Collectors dumped his cards fearing he was just another Greg Oden, but that couldn’t be further from the truth. He has proven to be a dominant force and collectors are now scurrying to pick up all the rookies they can of this top talent. And you can tell that by the performance of his Exquisite Rookie card. How often do you see a card without an autograph or game jersey patch selling for hundreds of dollars? Not very often, but such is the case with Blake Griffin’s 2009-10 Exquisite Collection Rookie card which can be had for about $250-$300.

So what do you think? Did we nail them all or did we miss some big named players whose Upper Deck card values have rebounded in a big way in 2010? Also, who do you think is low right now that is poised to bounce back and potentially have a comeback card of the year in 2011?