NHLPA Rookie Showcase: Get Your Skates On!

The 2010 NHLPA Rookie Showcase event took place last Wednesday, Sept. 1, and just like last year, Upper Deck was there to capture the top players from this year’s freshman class doing what they do best. The two-day event kicked off with an impressive meet-and-greet dinner the night before at the prestigious Hockey Hall of Fame, one of Toronto’s most respected venues. Upper Deck’s Hockey Brand Manager Josh Zusman joined the likes of Dave McCarthy, Vice President of Consumer Products Marketing for NHL Enterprises, in welcoming the 23 players and their guests to the annual get-together that truly initiates each of the new players into hockey’s highest level of competition. 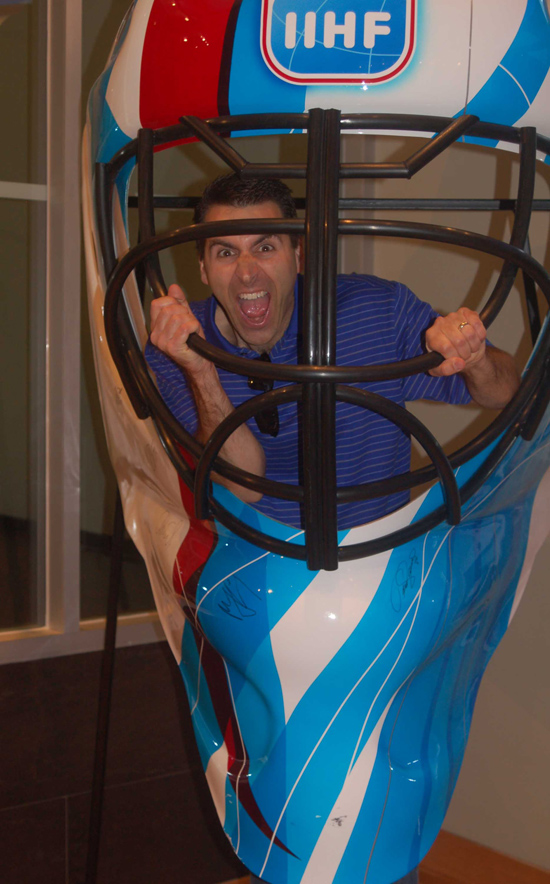 Upper Deck's Josh Zusman lets out a roar behind an oversized mask inside the IIHF Offices.

The next morning, the nearly two dozen up-and-coming stars (up from 14 the year before) converged on the MasterCard Centre in Etobicoke to participate in the annual event that Upper Deck hosted a year ago and sponsored in large part this year. 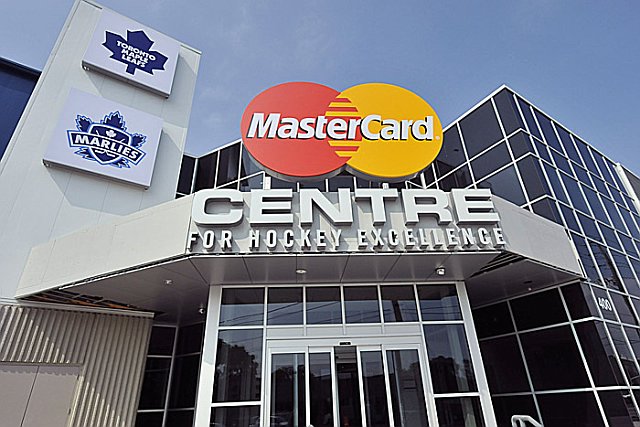 MasterCard Centre: This was the site of this year's NHLPA Rookie Showcase in Etobicoke, Ontario.

This year’s class of future NHL talent boasts many outstanding individuals including the Top 4 overall picks (in order) from 2010: Taylor Hall (F – Edmonton Oilers); Tyler Seguin (F – Boston Bruins); Erik Gudbranson (D – Florida Panther); and Ryan Johansen (F – Columbus Blue Jackets). After participating in a media scrum early in the day, at which more than 20 Canadian media outlets (print, internet, radio and TV) put the players through the paces by asking them a variety of questions, the NHL’s newest “Young Guns” got down to business with Upper Deck’s workforce at four different stations: portrait photography; on-ice action photography; video (where interviews and YouTube skits were filmed); and memorabilia signings. 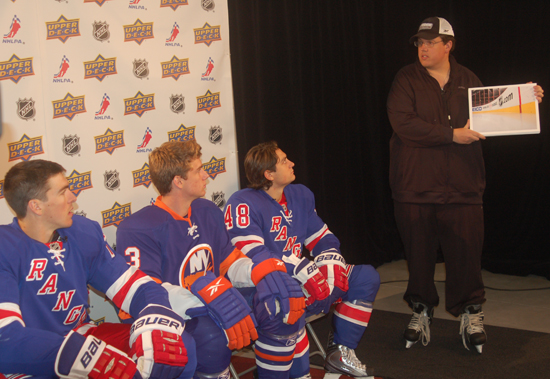 Coach Ron Cherry quizzes some of the NHL rookies on their hockey terminology with the help of flash cards. 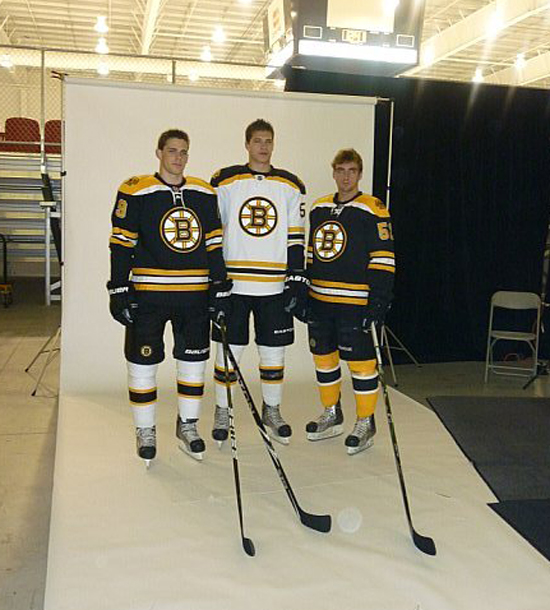 Interestingly enough, with the temperature reaching a very muggy 87 degrees outside, the planned activities at the MasterCard Center’s Rink 1 ice battled a steady five-foot fog much of the morning. With visibility so poor, the on-ice trick shot competition and other assorted photo and video opportunities eventually needed to be shuffled to another rink within the facility. The back-up ice certainly served the purpose, but not before causing a bit of logistic chaos for a few photographers and video personnel along the way. Like always, the UD Crew – spearheaded by  Zusman and Jodi Wasserman – rolled with the hiccup and didn’t miss a beat. 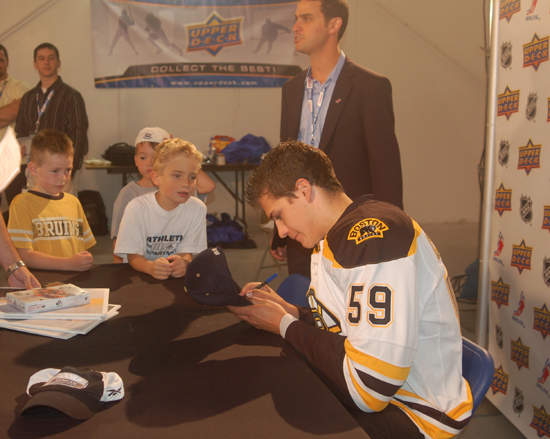 Positioned beside the still/portrait photography station, led by Bob Marsolini, was Upper Deck’s video crew setup, which was being spearheaded by Terry Melia and Chris Carlin. Similar to last year’s “Upper Deck Rookie Boot Camp” setting, Melia and Carlin put the players through a variety of well-thought-out skits that included a marriage proposal by Florida Panthers goaltender Jacob Markstrom; a “man-crush” encounter between Carolina forward Jeff Skinner and an overzealous fan; and a multi-tiered media training vignette that had many of the players throwing Edmonton Oilers forward Jordan Eberle under the proverbial bus, which is considered a big “no-no” during media interviews if locker rooms are to remain somewhat harmonious. In addition, Carlin asked each of the players a multitude of questions that were supplied by Upper Deck’s loyal Facebook followers. Check out Carlin’s latest UD Blog entry here: https://www.upperdeckblog.com/2010/09/the-2010-11-nhl-rookie-class-answers-your-questions/. 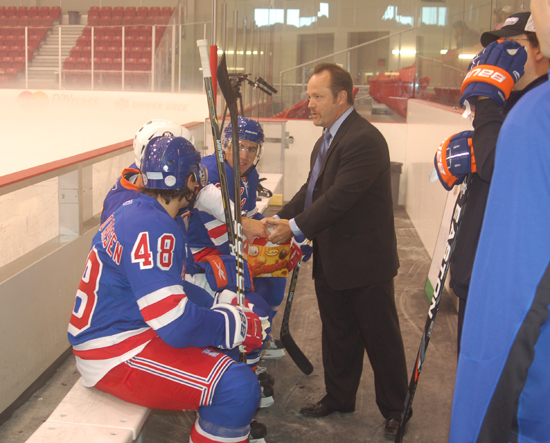 Upper Deck's Terry Melia shares a few TimBits with the likes of Mats Zuccarello-Aasen, Calvin de Haan and John McDonagh during one of the video skits. 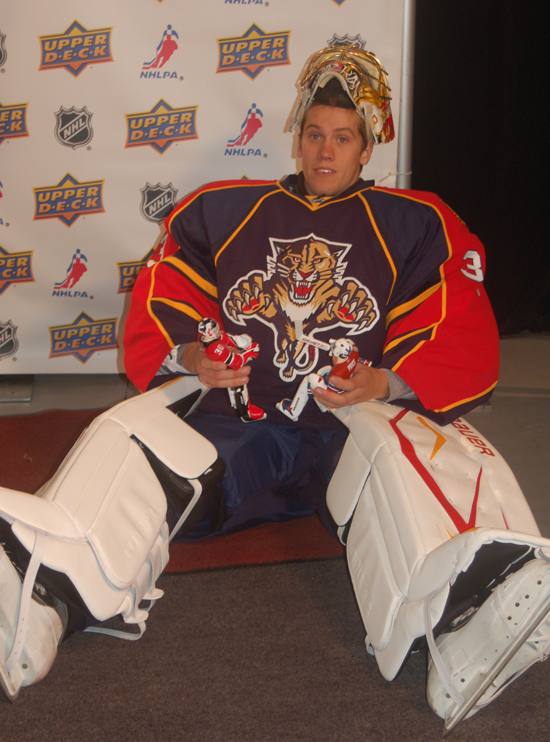 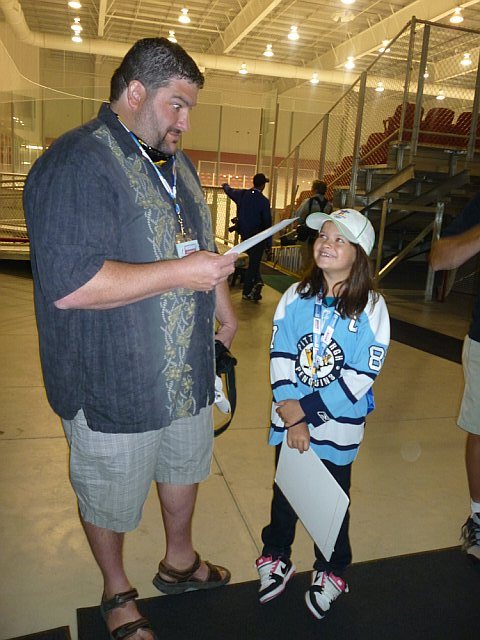 On the upper level of the MasterCard Centre, situated inside the NHL Alumni Office, Upper Deck’s Drew Mills and Jeff Lowman shuffled the players through a well-orchestrated memorabilia signing station that had each of them autographing items ranging from pucks and mini-sticks to helmets and photo mats. They also tried on a variety of authentic NHL jerseys from their respective teams that will be utilized in upcoming Upper Deck hockey card products as event-worn jersey memorabilia cards. Upper Deck’s 2010-11 Series One Hockey set, which is scheduled to launch in mid-November, will be the first product to include cards of this year’s rookie crop, provided the players compete on Opening Night. 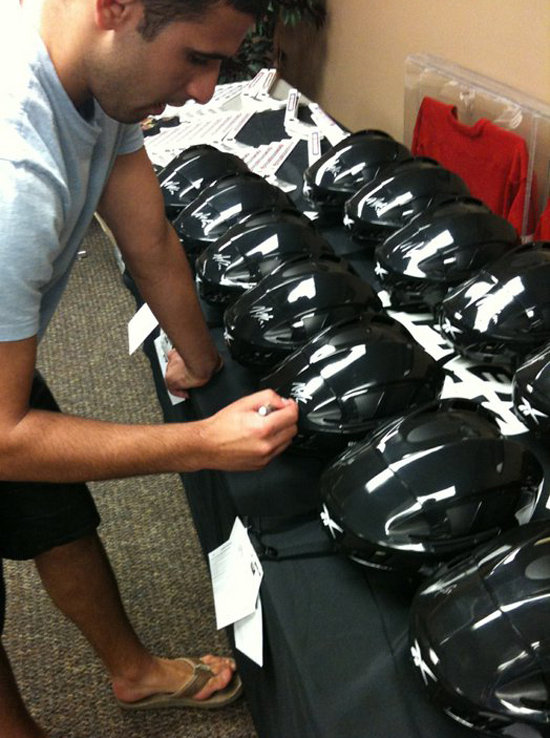 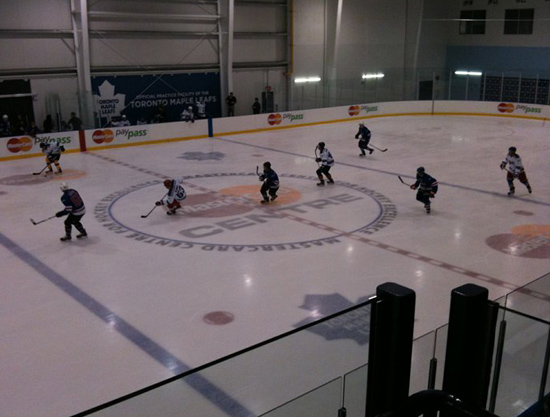 As the afternoon wound down, the NHL rookies all took part in a pickup game. Fun, fun, fun.