What would you do to secure a prize package from Upper Deck that included 20 tickets to an NFL game, a $1,500 shopping spree on NFLShop.com and your very own Upper Deck football card? Well, for Matt Ellis of Auburn, Indiana, the answer was simple: Show off his hard-earned tattoos. You see, Ellis – a rabid Colts fan – has been collecting signatures of his favorite players since 2007. Only the surface he uses for them to write on is his own body. He then gets their Sharpie scrawls permanently tattooed into his skin to show everyone his allegiance to the Super Bowl XLI (41) champs. 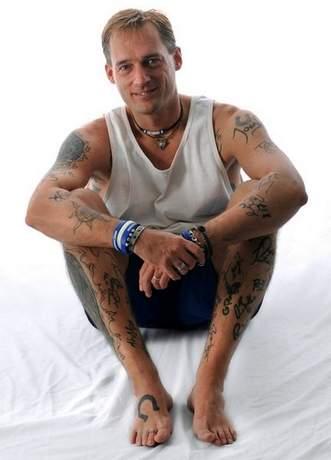 His die-hard devotion to the Colts earned him top honors in Upper Deck’s recent “Ultimate NFL Fan” contest. From October 13 through November 25, UD asked football fans everywhere to submit video, photo or written entries on why they should be considered the “ultimate NFL fan” and received dozens of submissions. But it was Ellis’s multiple photographic handoffs that sufficiently wowed the judges at Upper Deck. 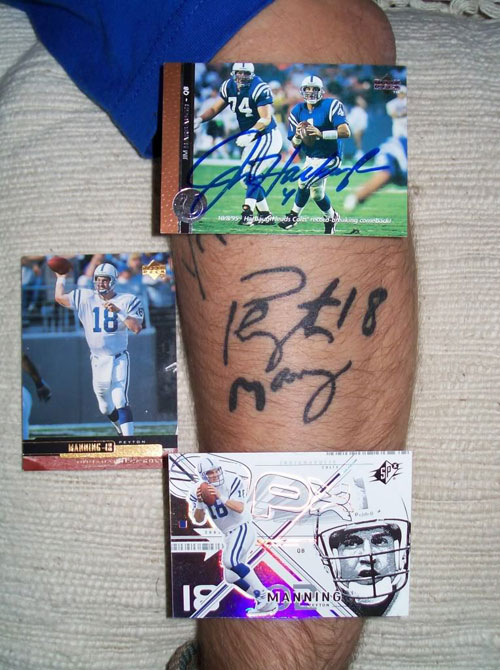 “Matt is obviously a big football fan,” said Carrie Peterson, Upper Deck’s online marketing manager. “But to have more than 30 tattoos inked across his body from his favorite NFL team showed us just how fanatical he is. Congratulations to Matt.”

The first “auto-tatt” (autographed tattoo) Ellis nabbed was from then-team-punter Hunter Smith. Following a local concert at which Smith’s acoustic rock band “Connersvine” performed, Ellis sought to get Smith’s signature on a football. Accompanied by his wife, Ann, Ellis decided while waiting in line to give her the football to get signed and was ready to simply have his ticket stub autographed. Ann jokingly said: “Have him sign your leg.” Suddenly a new pursuit was born. 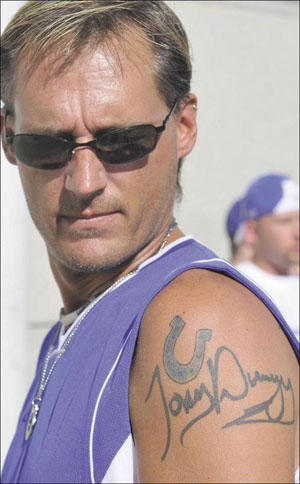 Today, Ellis has signatures of 31 different Colts players and two coaches from the 2006 NFL championship team tattooed on his body. “My legs are both covered from the knees down,” he said. He’s scored the majority of the autographs during Colts training camp in Terre Haute over the past three years and still has 21 more signatures to get from the Super Bowl-winning team. Both Marvin Harrison and Bob Sanders remain high on his must-have list. 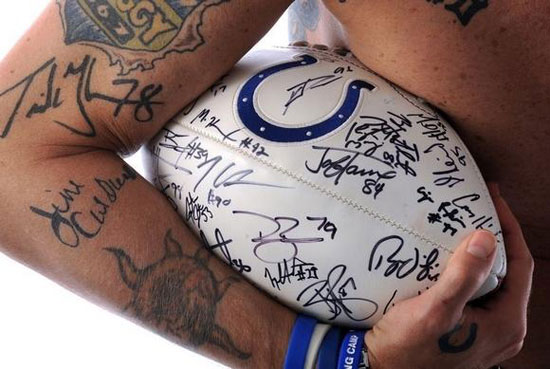 “I can’t think of any other way to show these championship football stars my appreciation for what I believe is the most spirited and out-of-this-world team.”

In addition to appearing on his very own Upper Deck football card inside a yet-to-be-determined 2010 set, Ellis has agreed to get Upper Deck’s “Ultimate Fan” logo tattooed on his chest.

“Are you kidding me? Absolutely I will wear the Upper Deck Ultimate Fan logo with honor. If you are willing to put me on a trading card, the best I can do would be to ink and represent Upper Deck,” he said. “How awesome will it be to say that I’ve got my own Upper Deck trading card?”


[…] If you saw our post last week, you know that we picked Matt Ellis of Auburn, Indiana as Upper Deck’s Ultimate Fan. He took home the big prize package (not to mention the pride that goes with the title). […]