The NFL trading card landscape in the late 1990’s and early 2000’s was drastically different than it is today. In 2000, those engaged in football trading cards still had fresh memories of an incredible 1999 rookie class in their heads where cards of Donavan McNabb, Edgerrin James, Daunte Culpepper, Ricky Williams, David Boston, Tim Couch, Cade McNown, Akili Smith, Shaun King, and more were all performing very well, even though many would become busts in the NFL. Collectors at that time were also very focused on one player in particular from that 1998 rookie class; Peyton Manning. 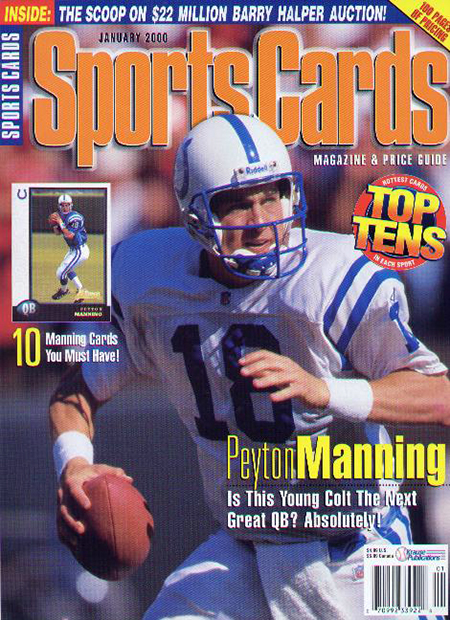 In the year 2000, collectors were totally focused on collecting Peyton Manning football cards. The perception was you had to be a top pick, to be a great quarterback.

When it came to collecting football cards, in the year 2000, it was all about Peyton Manning and the Indianapolis Colts. Cards of Peyton Manning, “The Edge,” and Marvin Harrison in particular were at the top of everyone’s want list. This led to a belief among collectors, that any quarterback of consequence has to be a top draft pick.

Having worked for Upper Deck for two years going into that season, I recall that we knew there was going to be a drop off in talent and value from the ’98 and ’99 seasons going into 2000. You could just see that in the 2000 NFL Draft that the direction teams were going was primarily defense and the position players of consequence, didn’t seem to have a very big “Wow” factor. Yet somehow, card companies made a rookie card for a sixth round pick in Tom Brady. Some may find that surprising, but at that time, if you had a QB as your position and you were drafted, you were going to get a rookie card made. Being that there were only six quarterbacks taken before Brady, the decision was easier.

Today Tom Brady’s 2000 SP Authentic rookie card is the most sought after of his rookie cards. It is limited to just 1,250 copies and they routinely sell for several thousand dollars. 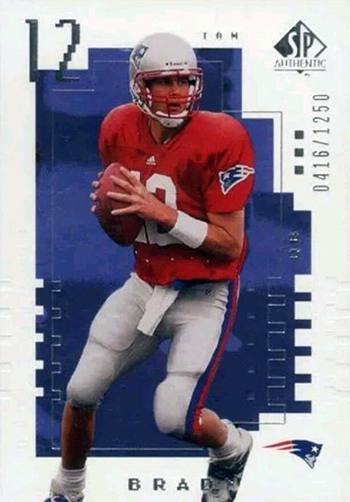 Here’s another one that sold for $21,600. Obviously the condition has a lot to do with the value, but with the white borders, these cards grade out very well. 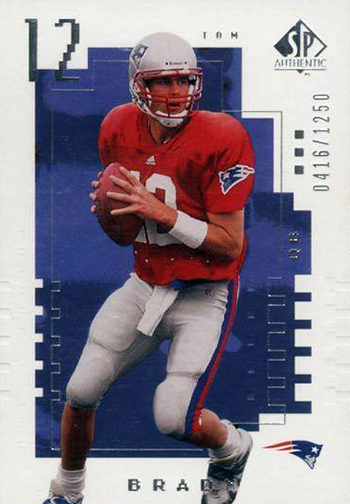 Today, we all know how great Tom Brady is and wish we could go back to 2000 to grab up as many of his rookie cards as possible. There’s one major reason that collectors felt Brady was a player destined for the common card bin in 2000; a man by the name of Drew Bledsoe. 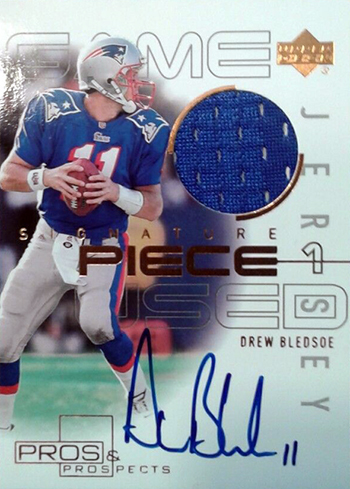 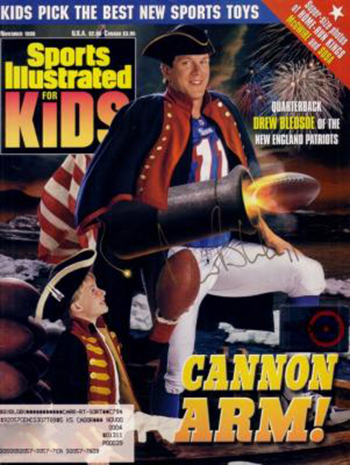 Bledsoe was the first overall pick in 1993 and had established himself as an elite quarterback who was well-liked in New England and in the hobby. Even though we now know he was at a point of decline in his career, collectors believed he would remain at the helm of the Patriots franchise for several years before Brady would even get a sniff of game action. Some collectors even believed if Brady was worth anything, he would be traded, and they would be able to get his cards on the cheap from Patriots collectors letting them at that point. The only collectors chasing Brady rookie cards at that time were University of Michigan fans, and boy did it pay to be a Wolverine collector that year! 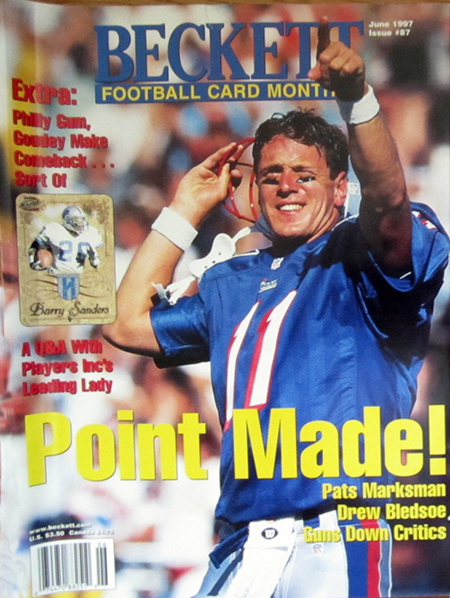 As I look back at that time, I remember there were dozens of prospects collectors were much more excited about than Brady. Quite frankly, collectors invested poorly in the wrong guys because it was just expected players would perform like we had seen before with the 1998 and 1999 rookie classes. While you’d like to say that if you went back then that you would have collected Tom Brady, you probably wouldn’t have. Here are the players I’m guessing you would have collected before Tom, and I’m guessing many of you did as there are not many people selling $20,000 Tom Brady SP Authentic rookie cards. So let’s take a walk down memory lane with the cards that distracted us from the true “star” of the 2000 NFL rookie card crop. 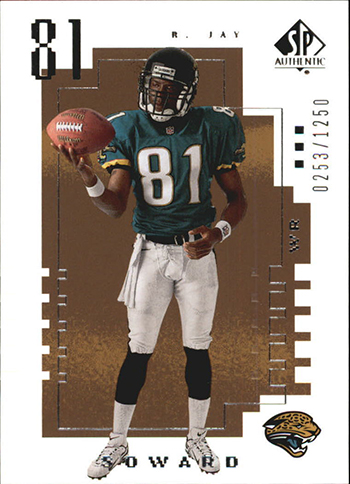 R. Jay Soward was an extremely talented wide-receiver out of USC and it seemed like he would have a great opportunity in Jacksonville with Mark Brunell throwing him the ball. Being a first-round pick proved to be too much pressure for Soward however and substance abuse issues kept him from ever seeing his true potential in the NFL and with collectors. 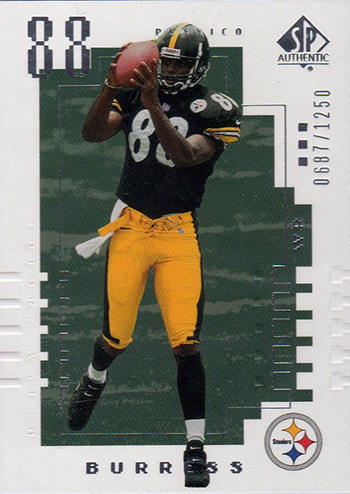 Plaxico Burress actually was a surprise in this draft class with collectors as he played well and seemed to have a bright future. He chose to leave the Steelers after a playoff defeat which caused Pittsburgh collectors to immediately hate him. Still his cards were popular when he moved to New York, until that one night, in the nightclub, where, well, you know that story… 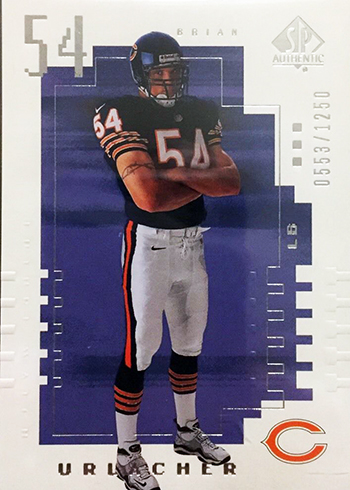 Brian Urlacher was everything the Chicago Bears and Chicago Bears collectors hoped he would be and more. Here’s the thing though, at the time NFL defensive players seldom carried premium values like position players. It’s not until their careers are nearing an end and their legacies are cemented that you can see values on their cards appreciate and stabilize. Still, he is one of the defensive players collectors would have definitely gone with over Tom Brady at the time. 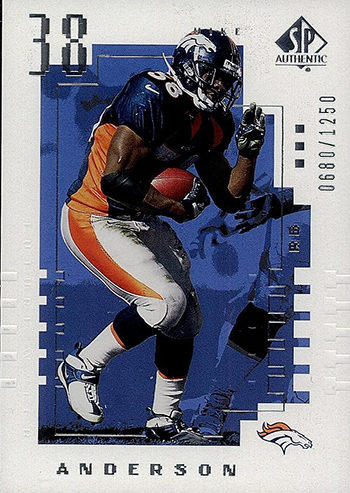 Remember when Mike Anderson was the rookie of the year in 2000 and we all thought he was the next Terrell Davis? He even had the “Mile High Salute” down. 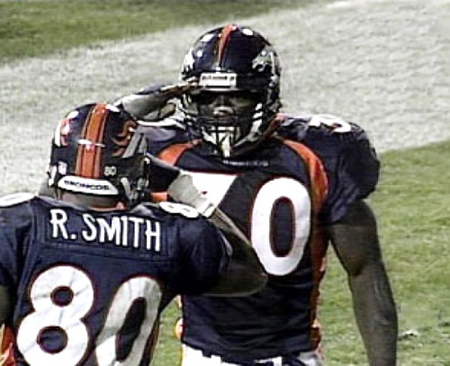 It didn’t happen though. Anderson would go on to show that it wasn’t the player, as much as the system and offensive line that made running backs look so good in Denver. 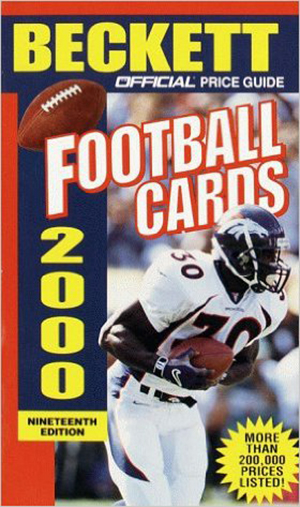 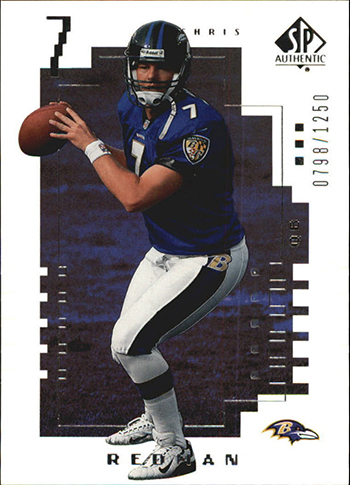 There was a long time, I’m talking months, were it was widely believed that Chris Redman would be the highest-valued rookie card in this set. The gunslinger from Louisville had his shot with the Ravens and there were times it looked like he could be great, but it never panned out. Interestingly enough he was signed to the Patriots in 2004 where he would have been the back-up to Brady, but he was waived before he could ever suit up. 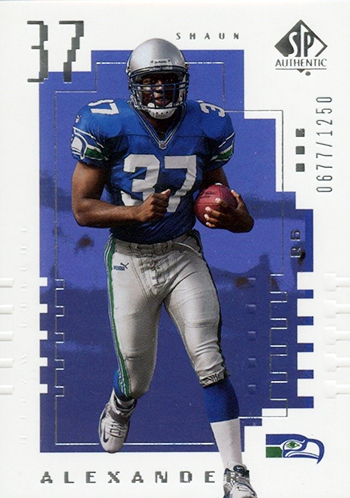 Shaun Alexander got a LOT of love in the hobby. He was the guy for this rookie class for a number of years and his play on the field supported that level of interest. Unfortunately, the running back position is a brutal position and Alexander’s career was cut short primarily because of injuries. 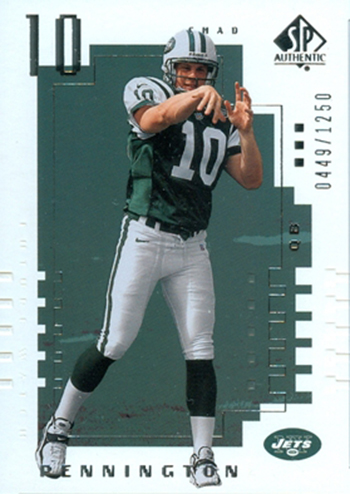 There are a lot of collectors in New York with deep pockets and many of them were emptied on Chad Pennington in the early 2000’s. Pennington was a strong, good looking kid who had flashes of greatness, but was never able to really sustain it and take his team to the next level. 2008 was a special year for Pennington when he finished second in MVP voting to Peyton Manning, but when he moved to the Dolphins, many New Yorkers dumped their collections of #10. 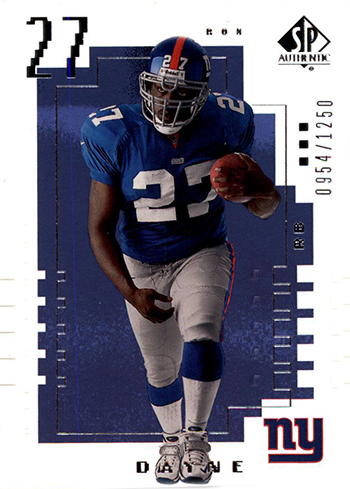 He was the Heisman Trophy winner and bruising back that was supposed to be an unstoppable force in the NFL. It didn’t happen. With Tiki Barber in the backfield they were briefly known as “Thunder and Lightning,” but Dayne’s career came and went quickly. Today his cards that perform the best show him as a member of the Wisconsin Badgers. 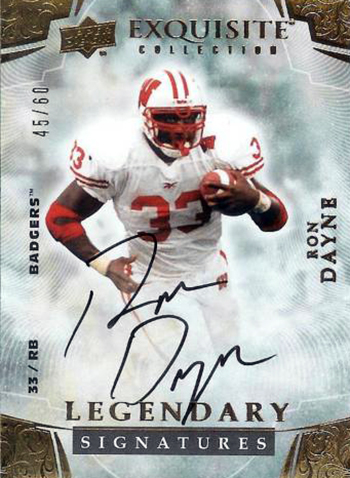 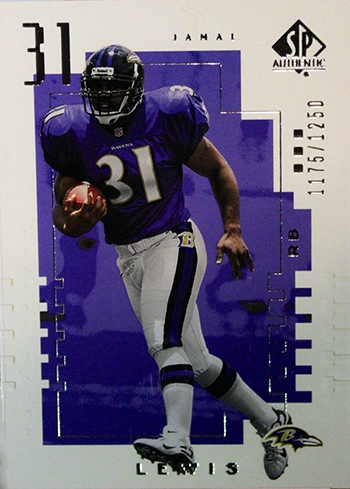 Lewis was a beast his rookie season and collectors fell in love with him, especially because the Ravens ended up winning the Super Bowl that year. He missed his sophomore year however due to a knee injury and collectors began to jump ship. It didn’t help that it looked like he was limping in his 2000 SP Authentic rookie card. He bounced back in 2003 however leading the NFL in rushing, making it to the illustrious 2,000 rushing yard club for a season. He had a very nice career, but he is certainly not on the caliber of Tom Brady. 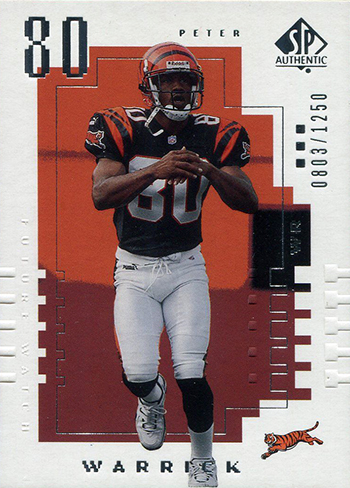 Peter Warrick was the most elusive player in college football and every collector was all-in on what he would do in the NFL. There was just one problem, and it was a big one, the guys throwing to Peter Warrick were Akili Smith and Scott Mitchell. It didn’t work out and many collectors got hammered on the can’t miss pick of the season in 2000. Today those collectors are kicking themselves asking, “How did I miss Tom Brady…” 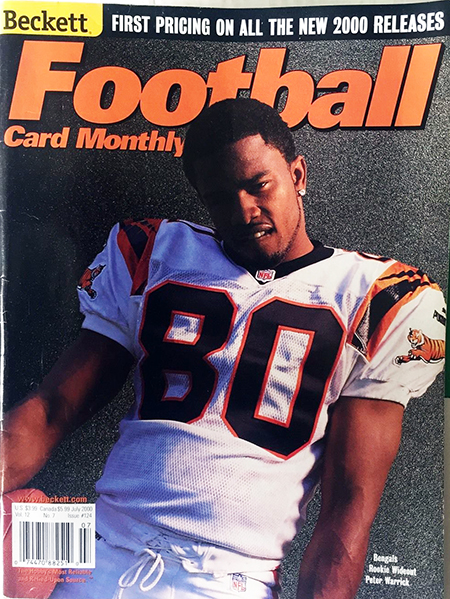 In the year 2000, football collectors were totally focused on this guy, instead of Tom Brady.

Again, there were plenty of other players out there collectors were crazy about over Tom Brady. Let me know who you were chasing before Brady in the comment section below!


It’s crazy i got a Peter Warrick card mint it says generation Y2k NFL LEGEND upper deck Cincinnati Bengals its numbered 0019/2000 what’s it worth does anybody know ??


In 2016 I happened to go through a bunch of Bowman’s Best Chrome Rookie cards I had. I remember when I bought them I put them all in a binder and told my buddy….even a nobody from this set will probably have a $5.00 rookie card. ….started going trough them an the was a pristine Tom Brady rookie. Not the refractor, but still a damn good find. Sold it this year (ungraded) for $250.00.

Checked my QB binder out of curiosity…for the year 2000 I had about every Drew Bledsoe card that came out.

This is per the Beckett’s online price guide