On October 10th, Brett Favre turns forty. To celebrate, he’ll make his 274th consecutive start the following day. It’s actually crazy to think that after 17 plus years in the league, he still has the presence of body and mind to get out of bed in the morning, let alone onto a football field filled with 350 lb players who want to hit him as hard as possible. Although I have never been a Brett Favre fan, I have always respected his toughness and tenacity. The guy never quits, as was showcased on Monday for the umpteenth time.

When the game started, the world’s eyes were watching as he took on the only team in the NFL that he hadn’t beaten. Having played 16 seasons in Green Bay, many people knew it was going to be a ruthless display of physicality as Favre took the field wearing the hated purple jersey instead of green and gold. When the cameras went through the players during the warm up, you could see the importance of the game in the methodical movements of the Vikings players who wanted to win it for Favre, as well as the cold stares of the Packers players who wanted to destroy his comeback for Rodgers. It was going to be a bloodbath from the beginning.

Once the game started, Rodgers quickly shows why the Packers chose him over Favre, marching down the field faster than the players expected. Yet, thanks to a ridiculous Vikings defense, they came away with zero points. Favre then had his first chance to work, scoring with a bang on a great looking pass to Visanthe Shiancoe. From there, it was a slow but steady decline for the Packers.

Each time the Packers had the ball, Rodgers faced a never ending onslaught from Jared Allen and the rest of the Vikings defensive line. He ended up being sacked eight times, including one for a safety, which led to problems scoring points. The Packers would get close, and the Vikings would hold. When it was 4th and goal from the 1, Rodgers thought he could finally outplay them for seven points. He was wrong.

Each time the Vikings had the ball, Favre looked like he was back in his 1990s form. He completed pass after pass, including a few that seemed impossible. He showed poise and smarts in a time where most people would be overcome with revenge schemes, throwing for 271 yards and three scores. It was a masterpiece in motion, and the Packers were the wall he hung it on instead of focusing on personal glory. 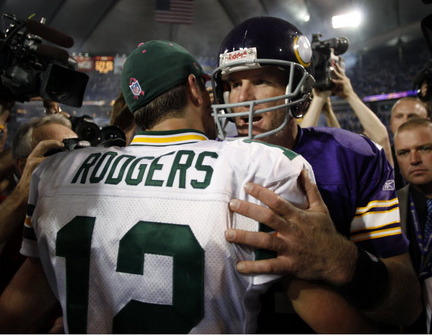 For the first time in three years, Adrian Peterson was held to nothing and it didn’t matter. He finally has someone who can take the team on his shoulders when the defense mounted up to stop him, and you can see that coach Brad Childress loved every minute of it. It’s an element of the Vikings offense that never had to be accounted for before. Instead of the defense putting eight or nine players at the line to cut off running lanes, they are now going to have to play both the receivers and the backs. That is a two headed monster you never want to face as a defensive coordinator.

Regardless of his performance last night, Favre’s legacy was complete before he stepped onto the field. However, now that this part of the epilogue is written, the book may just be a little bit better. Favre is playing very much above expectations (much to the chagrin of Packers GM Ted Thompson), and it feels great to see him beat up on the team we Vikings fans love to hate. Even though he may not lead the Vikes to their first Super Bowl, he does bring hope to a team that has had very little in recent years. Then, when you see him perform on a national stage with no interceptions, no turnovers, and no mistakes, it takes that hope to a whole new level.

Coming up in the next few months, Favre will have his first hard signed autograph in a Vikings uniform, and I will guarantee you that it will be one of the most valuable cards ever for him. Not because he has accomplished something more on the field than he already had, but because he has a new legion of loyal fans behind him. Vikings fans are notoriously competitive collectors, and they will not pass up the opportunity to own the first card handled and signed by their new favorite player. This will lead to astonishing prices on Favre Vikings cards, and more ways for fans to get closer to the player.

Personally, I have already started saving my money to get in on the fun, and I know I will be one of the people who will be looking for my first Favre card in my large Vikings collection. It has a lot to do with the fact that I am a junkie for all things Minnesota, but also because the cards are a purple anomaly in an otherwise gold and green run. How often does a player go play for the rival, and do well with their venture? What if Derek Jeter went and played for the Red Sox, and did better than his usual fare with the Yankees? I’m sure many Sox fans would love to own those cards, just because of the history involved in the rivalry.

Like I said, Favre may not bring a title to Minnesota, but he at least gives us the chance. After Monday night, I am starting to believe.


Favre sucks!! Gonna kill Minny fans the way he did the Jets fans


Favre rules!!! Gonna kill Cheese fans the way he did the first meeting!!!