The Value of a Tiger Woods Autograph

Right now, Tiger Woods is on the warpath after a debilitating injury that could have put many athletes out for good. After spending close to a year on the shelf with a surgically repaired knee, he is coming back with the roar we have become accustomed to seeing. Because Woods has already won a slew of Majors (not to mention more tournaments than you can shake a nine iron at), he is the person that tops my list of autographs you MUST get in the next year. 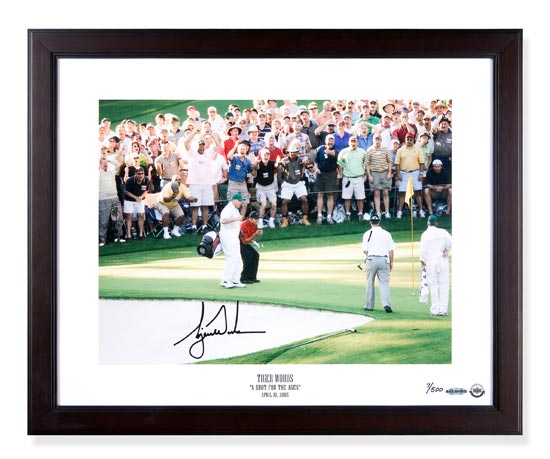 As we saw this past week at Hazeltine Country Club in Minnesota, Tiger is a freak of nature, driving the ball farther than I have ever seen. I have actually had the chance to play the course myself, and though I am around a 10 handicap, I haven’t ever seen anyone play the course the way he did. He is truly the beast of beasts, quite possibly the most talented athlete in the world without challenge. For those of you who play golf, it’s clear what I am talking about when it comes to the unmatched difficulty of the game.

As many will attest, golf is one sport that can take a lifetime to become good, even at a casual level. To give you an idea, I have played golf since I was five, and I still cannot hit a ball over 300 yards. This is a feat that Tiger can accomplish without removing the head covers from his woods. Even if I did manage the farthest shot of my career, it definitely wouldn’t go in the right direction. For a professional, this type of thing is expected, and Tiger does it with class.

I used to know a local pro who was lucky enough to play in a tournament round with Tiger; he said it was like watching perfection with every swing. Every. Last. Swing. He said that Tiger did not make one mistake the whole time he was out there, something that most golfers will say is close to impossible. Of course, I’m not even talking about shanking it into the water, missing a bunker shot, or failing to reach a green in regulation. I am talking about hitting the right spot on every fairway with your drives, landing each approach shot within mere feet, and putting on a less than two putts per hole average. The guy will be the best ever when it is said and done, possibly among the best players of any sport in history.

Luckily for us, we have many opportunities to own a piece of Tiger’s glory, something that is usually very hard with the titans of each respective sport. Even though it may cost above 300 dollars to purchase a frame worthy piece, it will be worth every single cent in the coming years. Tiger has done more for golf than any single person has done for a single sport, and that will only become more relevant as he moves forward. 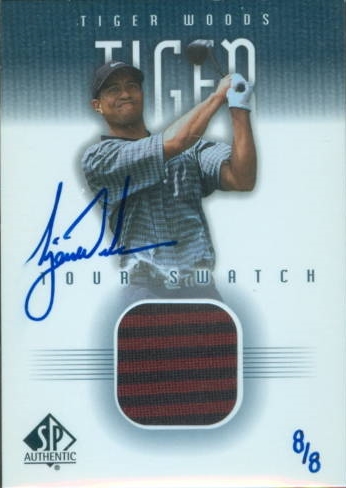 If you have the money to purchase one of his SP Authentic golf cards, I would do so as soon as you possibly can. There is no way your investment will decrease in value, even if he were to retire tomorrow. Michael Jordan may have been the best and most visible athlete before, but he never meant as much to his sport as Tiger does to his. Jordan’s autographs are the most valuable every year, regardless of set, and Tiger will never be any different (as evidenced by his recent appearances in Ultimate Football and Champs Hockey). Also, as an Upper Deck exclusive spokesman, he should keep signing for many upcoming sets, something that will continue to be a great thing for collectors who don’t have his autograph.

The fact of the matter is, that there has never been another player to have the game changed to challenge their dominance. This fact alone gives people a perspective as to just how much Woods has meant to the game of golf. Since his first win, Tiger’s presence in golf has prompted new golf course designs, new huge distances from the tee, and new depth in every bunker. Someone like Babe Ruth was a player who could have been challenged by bigger parks, but that never happened the same way Tiger has faced constant change in every day play. The biggest example has definitely been the changes to Augusta; one of the most famous courses in the world, where course redesigns after Woods’ -19 performance in his first Masters win were sweeping to say the least. Entire holes were gutted to make it harder for him to rack up crazy scores, including the holes on the famous Amen Corner. Like a true champion, it did little to prevent his number of victories, but rather only grew the stroke counts in which he accomplished them.

With the Upper Deck Authenticated store offering some of the most breathtaking pieces ever signed by Tiger, its time to think about spending some money while prices are where they are. Even if you are just a casual fan, it is worth the money to add a conversation piece to your collection just to display it with pride. Even better is that every single Tiger Woods autograph has gone through the extensive Upper Deck certification process, which means that there is a 100% guarantee from the company that what you are buying is real. In today’s market, this is all but essential, especially when these autographs look as wonderful as they do. 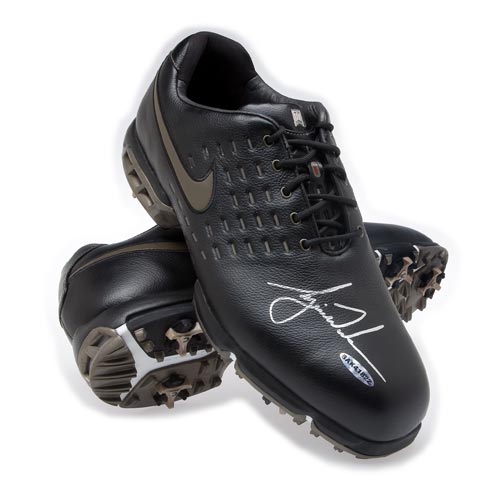 You may see that people tout autograph rarity as the sole determining factor of value in this hobby, but I disagree. Personally, I say that when the market is ready for each player to reach the pinnacle of their accomplishments, it will be the prestige of the item the autograph is signed on. Thanks to some innovative approaches to signing, the Upper Deck cards and memorabilia will no doubt be the most valuable for Tiger. So, why miss out on your chance to buy in? You already know that he is the face of his sport. You already know he will pass Jack Nicklaus shortly to become the winningest golfer ever. You already know his value will never decrease. Therefore, buy what you can before the prices match his legacy, and get something that will always stand out from any other item.

UD has done a good job at keeping Tiger’s signature exclusive. I do worry about the memorabilia industry as a whole. Other than chopping up vintage memorabilia for manufacturing cards, which I completely disagree with, UD is putting out awesome stuff and keeping the industry vibrant. Good job. I really like the Tiger Woods Autographed Sweet Swing Photo

Sorry for my bad english. Thank you so much for your good post. Your post helped me in my college assignment, If you can provide me more details please email me.

i have a child’s ballcap signed by Tiger weeks before he won his first masters in 1997. how much is this worth?