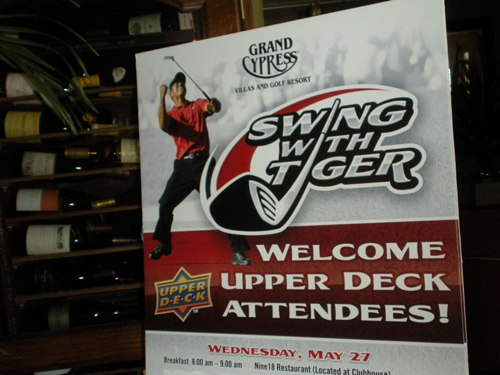 It was billed as a once-in-a-lifetime opportunity to meet and interact with the greatest golfer on the planet- and 18 lucky Upper Deck customers and collectors were eager to find out if the event could live up to the hype. Even us Upper Deck staffers were beginning to get antsy, wondering if we could meet the high expectations we had created leading up to it.  After all, Tiger could only do so much in the one hour he had available (as he prepared to play in the Memorial this week).  It wasn’t as if he was going to be able to instantly fix someone’s slice or cure someone of a lifetime of putting yips. 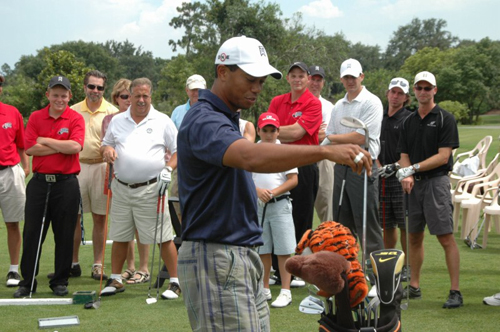 Yet, when the 14-time Major winner and arguably the greatest golfer of all time arrived at the teaching academy of the Grand Cypress Golf Resort in Orlando,  strolled up and casually introduced himself (as if the starter had just told him to join your foursome as a single at your local municipal), we knew our guests were in for monumental experience. At that moment, our worries of over-hyped expectations instantly subsided.  What transpired over the next 65 minutes was truly remarkable, and exemplary of what has made Tiger the most popular and recognizable athlete in the world.  He proceeded to hit balls for 15 minutes while the guests asked him questions about his childhood, his career, and being a father.  One guest asked “Is that the driver you hit on tour?” as if he couldn’t believe Tiger Woods was really standing 10 feet in front of him carving shots with the actual clubs he uses on TV.  Once what was happening set in, most guests and even a few staffers (sorry, I just couldn’t resist), posed for photos with his golf bag and his famous Tiger headcover named Frank. 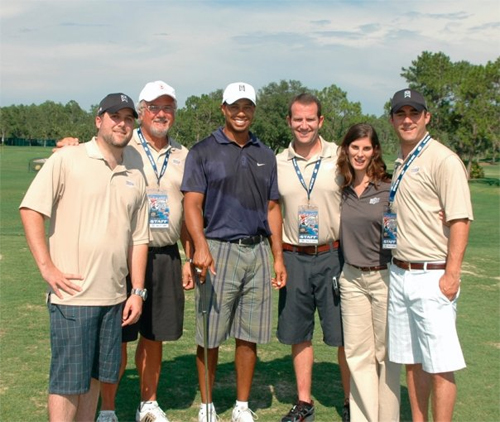 Dave Sanders on the far left, with staff. And Tiger Woods.

After he worked through his bag hitting various draws and fades while answering questions from each guest, it was time for each participant to take a few swings of their own.  Over the remainder of the hour, each guest hit seven or eight shots with Tiger providing feedback—a subtle change in posture, a slight tweak of their grip, or an adjustment to their swing path.  More times than not, the guests saw immediate results.  Maybe he could instantly cure a slice after all!  When it was time to move on to the next guest, Tiger posed with each participant for a photo that was sure to instantly become the ultimate Facebook profile pic for years to come. 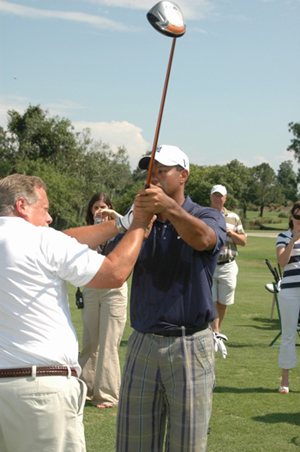 When a 16-year-old high school golfer who had shot a 39 earlier in the day (and the only lefty in the group) got a chance to demonstrate his impressive skills for a youngster, Tiger asked to borrow his club.  As Tiger explained to the group, he and other golfers on the tour liked to mess around hitting left-handed shots as a way to increase coordination and build opposite hand strength.  Without even a practice swing, Tiger proceeded to hit a left-handed 7-iron about 160 yards dead straight toward a small green in the middle of the range. 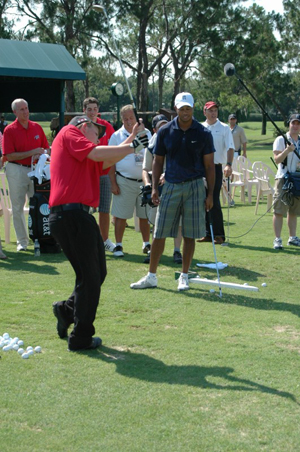 Look out Phil, you may not be the best left-hander in the world for that much longer.

The Shirt Off Tiger's Back | Upper Deck Blog


[…] for the ultimate high-roller gift for Father’s Day?  During a recent trip to Orlando for the previously blogged about Swing With Tiger event, we stopped by Tiger’s office to have him sign and inscribe the shirts he wore in the first three […]


[…] In case you missed our post from last month, Upper Deck Authenticated recently held a one-of-a-kind event, where a select lucky few customers were given the opportunity to meet Tiger Woods and take a few swings with him. […]

Brag Photo of the Week: Guess Who's Back . . . Back Again | Upper Deck Blog


[…] is that Tiger will be making his return to competitive play a little more than a week from now. Upper Deck has been affiliated with Tiger for almost a decade now, and we’re very excited to see him back in […]