Vs. System 2PCG: Marvel Studios’ The Falcon and the Winter Soldier – Tarnishing the Shield

We’re back with more Vs. System 2PCG: Marvel Studios’ The Falcon and the Winter Soldier cards for you, and this time around they’re a little less reverent to Captain America’s history.

How else would you describe the unsanctioned spread of the Super Soldier Serum?

If that weren’t enough, someone unexpected has taken up the Shield! 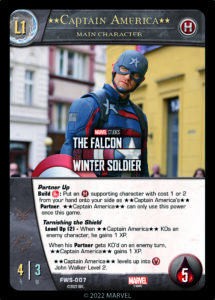 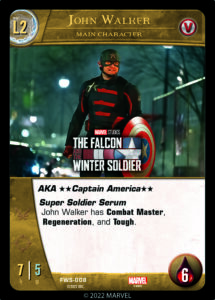 John Walker might mean well as the new “Captain America”, but certain events and a whole lot of pressure lead to him Tarnishing the Shield. Despite that and some deeper loss, at least one person’s out to give him a second chance at greatness after all’s said and done. 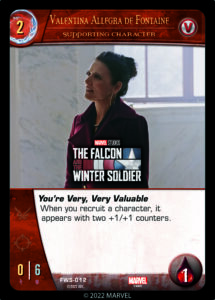 Even more pressing are the actions of the Flag Smashers, spearheaded by one Karli Morgenthau. 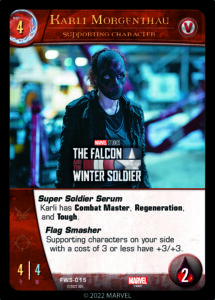 With plenty of people rallying to their cause, it might just take someone who knows the power of making someone feel heard to step in and show the world what it means to be a hero, and a leader.

We’ll see them take wing next time for our final, early look at Vs. System 2PCG: Marvel Studios’ The Falcon and the Winter Soldier!