We arrive now at the last of our looks into what Wakanda brings in Legendary: Black Panther. Alongside all the craft and cunning we’ve already shared, there’s yet another twist on a familiar staple of the game – Wounds. Wounds have been the bane of many a hand in Legendary, often throwing off your well-made deck at the worst possible timing.

Instead of being affected by those cards, how would you like to be the one to deal them out? 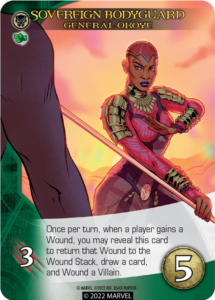 Yes, it’s now possible to Wound a Villain! Whenever a card prompts you to do so, “Put a Wound onto a Villain from the Wound Stack or from the KO pile. A Villain gets -1

for each Wound on it. When that Villain is defeated or leaves the city, return all Wounds on it to the Wound Stack.” With this it’s possible to bring Villains down to 0  or even into negatives. This won’t cause them to be defeated instantly. They still must be fought but you’ll be able to do so for free! As for if they reach a negative

value, that’s treated the same as 0 – no refunds. 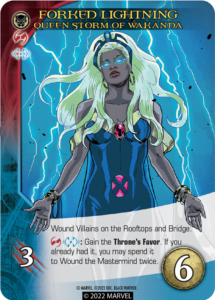 Some cards specifically say to Wound the Mastermind. This works the same way as Villains, though whenever you Fight one of that Mastermind’s Tactics their Wounds will return to the Stack. That’s not the only way that Wounds can be removed from Villains and the Mastermind, though. Certain Villains are more than capable of doing just that… 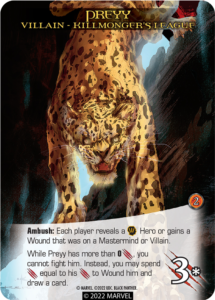 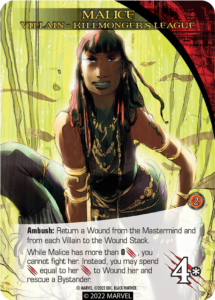 Where they go, their leader awaits his chance to challenge the king, staking a claim to the home that he had lost! 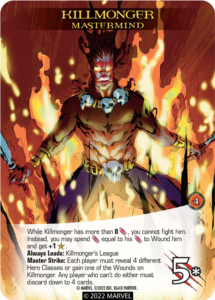 Killmonger, along with Preyy and Malice, aren’t “Fought” the same way as other characters. Instead you must spend

in order to Wound them and bring that

value down. In Killmonger’s case you must spend 5

. Wounding them this way is not considered a “Fight” for the sake of certain effects, and you only gain their listed positive effect (like +1

from Killmonger) when you Wound them – not when you Fight.

That’s all we have to share from Wakanda for now, with plenty more secrets and Marvel characters awaiting you when the expansion releases. Look forward to seeing them and playing Legendary: Black Panther when it’s available starting August 3rd.

I love when expansions add new mechanics that change how we fundamentally approach the game.

Can’t wait to try it!