The secluded African nation of Wakanda has managed to elude Legendary so far, but no longer! We’re ready to reveal some of its secrets and prosperity with all of you, all under the watchful eye of King T’Challa. The Black Panther has been featured before, in both Legendary®: Secret Wars Volume 1 and Legendary®: Civil War, but here he and others associated with his home are the sole focus.

He is but one of the defenders of Wakanda, with others at his side ready to fight to protect their people and the precious Vibranium of their homeland. Of course it’s not just the Heroes themselves that define a Legendary expansion – there are new and returning keywords to discover, and villainous interlopers to fight back against. 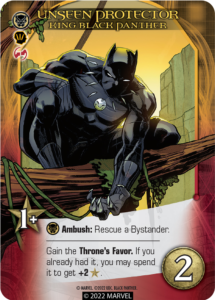 “Dive” is right, as something previously unseen you’ll find in Legendary: Black Panther are Ambush effects on Heroes instead of Villains. Inspired by his animal namesake, T’Challa is more than capable of catching enemies off guard.

These play out much the same way as the already familiar Ambush effects, but may have other conditions to fulfill as well. For example, when a Hero with an “

Ambush:” effect enters the HQ during your turn, you may use that Ambush ability if you have an

Hero.” This can be activated via cards you’ve played, cards in your hand, or cards you control (such as Artifacts, like those found in Legendary®: Doctor Strange and the Shadows of Nightmare). 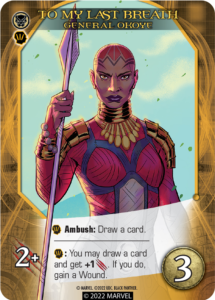 While you can play your cards however you like on a given turn, when it comes to set-ups with Heroes that have Ambush abilities you may want to consider recruiting before you fight. The more Heroes you can cause to enter the HQ on your turn, the more opportunities you have to gain extra card draw, more

, or other beneficial effects.

General Okoye of the Dora Milaje is more than capable of a successful Ambush as well. As a royal guard for the Black Panther, she’d be well acquainted with this returning keyword you likely spotted as well. 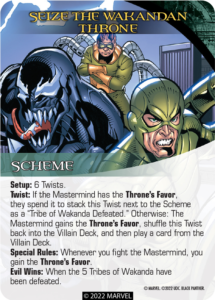 Introduced in Legendary®: Realm of Kings, the Throne’s Favor is perfect for the power struggles that some bring to Wakanda. Whenever a Hero allows you to gain the Throne’s Favor, you can use a nearby object to represent your rise to prominence. There is only ever one Throne’s Favor in the game, meaning if another player already has it then you take it from them. As seen in the above Scheme, even the Mastermind can take the Throne’s Favor for themselves!

The return of the Throne’s Favor is well suited to the workings of Wakanda, as are the other keywords and mechanics we’ve yet to reveal. Be on the lookout for those in our next preview, and when Legendary®: Black Panther arrives this summer!