Legendary® 007: The Spy Who Loved Me Preview: The Perils of Being Bond

Things aren’t always easy for Bond, and the all-new to Legendary Perils showcase that perfectly. Many of the card groups in The Spy Who Loved Me require you to set up a Peril stack beside the Mastermind. As you play you’ll be instructed to draw these cards, representing traps and scenarios that Bond has been forced into. Be they shark pits or falling stone blocks, they represent unforeseen obstacles that put you in danger! 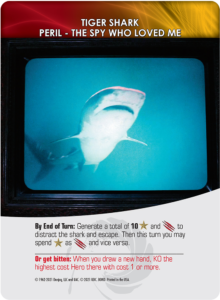 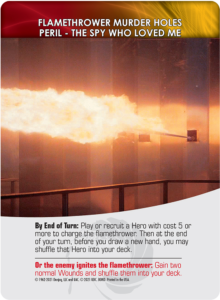 No matter what happens with a Peril, it’ll be KO’d at the end of the turn of the player dealing with it. If you succeed in its challenge you’ll be safe from the Peril’s effect and gain any benefits from your accomplishment. If you should fail, you’ll have to deal with penalties that are different for each potential Peril.  Before you draw a new hand, follow the instructions on the card and then KO the Peril. A new, “Goodbye, Mr. Bond” Special Wound is also included in Legendary®: The Spy Who Loved Me, which forces you to draw a Peril immediately! 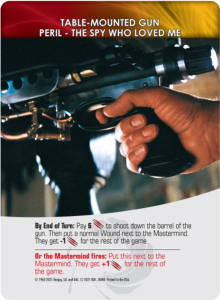 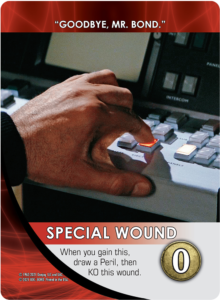 Legendary®: The Spy Who Loved Me – A James Bond Deck Building Game Expansion will be available on April 20th. The Core Set and first expansion are both available now!