Legendary® 007: The Spy Who Loved Me Preview: Dropping in for a Quick Bite

Standing tall in 007’s cadre of villains is Jaws, one of the few recurring adversaries Bond has had to face over the years. Supremely strong and with his trademark metal teeth, he’s the inspiration for a pair of keywords that aim to embody his seemingly unstoppable nature. 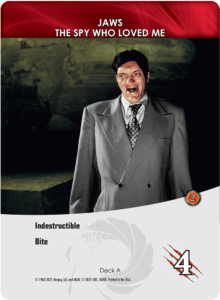 Bite makes it so that at the end of each turn Jaws is present, he’ll KO the hero in Q Branch beneath the space he’s currently occupying. Not only that, but the space will not refill as long as Jaws is On Assignment. This repeatedly and effectively limits your options, as you won’t be able to draw new heroes for those spaces until Jaws is taken care of or he escapes. Fighting Jaws early, or using effects to move him, will help keep these Bites in check! 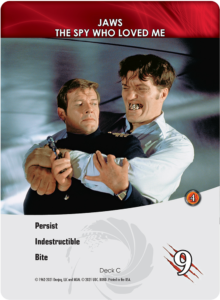 Even if you can face off with Jaws and win, he never stays down for long. He’s also Indestructible, meaning rather than being added to a player’s Victory Pile he’ll instead escape. This will trigger any Mastermind’s “Escape:” effects, and require that you still KO a hero from Q Branch with cost 6 or less. This happens before you refill any “bitten” spaces from his other keyword, and makes quite the combination with the returning Persist keyword.

Last but not least is a mechanic built around Karl Stromberg’s dream to create a new world beneath the sea. Any card that has Submerge should be rotated so it’s now upside-down (but still facing up) so that its blue “Submerged:” text is right side up. 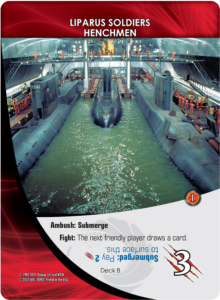 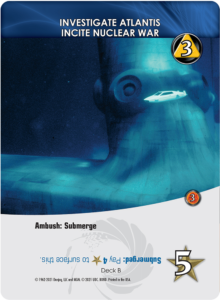 Submerged cards cannot be fought, completed, or KO’d. They dwell underwater, and require that players first pay a listed cost to Surface the card. Once that cost is paid you can rotate the card to its standard orientation, and it can be fought or completed as normal. Surfacing a card doesn’t count as fighting it, but it is possible to both Surface and fight a card on the same turn so long as you have enough fight and/or recruit to do so. 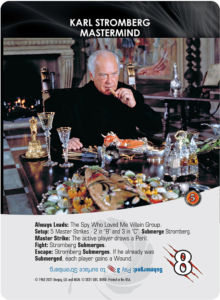 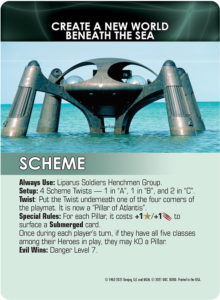 It’s important to note that while a card is Submerged, its other effects can still be active. This is especially true of Stromberg, who can deal out Wounds if an enemy escapes while he’s already Submerged. Regularly Surfacing this Mastermind will play a big part in your victory!

Legendary®: The Spy Who Loved Me – A James Bond Deck Building Game Expansion will be available April 20th. The Core Set and first expansion are both available now!