Legendary: Messiah Complex – Shatter the opposition with a Tactical Formation

Ready for more Legendary®: Messiah Complex? Well, let’s show off the rest of the new keywords!

Here’s a question for you: How would you like the sheer power to blast something into smithereens? Well then, our next keyword just might be for you. Say hello to Shatter!

Seismic shock waves or sonic shrieks can Shatter even the strongest defenses. Some Heroes say things like “Shatter a Villain in the Sewers” or even “Shatter the Mastermind.” 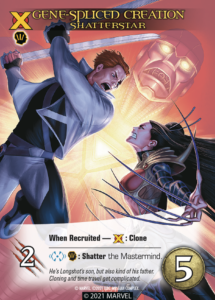 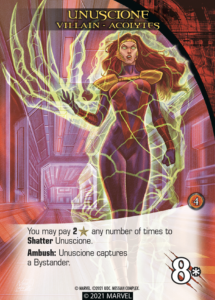 Likewise, some Villains say things like “You may pay 2

to Shatter”, making them easier to defeat.

• This means “Halve that enemy’s current

. (round up to the nearest whole number.)” This effect lasts until the end of this turn.
• You can Shatter the same Villain multiple times, halving their

History has shown us time and again that a well-trained and well-organized force can often overcome the odds and defeat a much stronger force. Look no further that the Greek Phalanx, the Roman Legions, or today’s modern Special Forces. Now this kind of precision comes to Legendary with the introduction of Tactical Formation!

X-Force is known for precise strike force tactics. X-Factor Investigations likewise plans their missions to the finest detail. With this new keyword, some Heroes say things like “Tactical Formation 445: You get +3 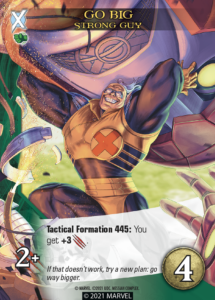 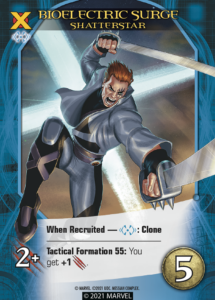 • You can use this ability only if you have two Heroes that cost 4, and one Hero that costs 5.
• You can count the “Tactical Formation” card itself.
• “Heroes you have” includes Heroes in your hand and Heroes you already played this turn.

Ever wonder what’s lurking the dark? Do you sometimes get the eerie sensation you’re being followed? That you’re being stalked? Of course you do. We all feel that way sometimes. Now when you play Legendary it’s not just a feeling any more. You’re being hunted! And whatever is out there is hungry and you’re its prey!

Some Villains say things like “Ambush: Prey on the fewest

.” After this Villain enters the Sewers, each player reveals their hand, and you check which player has the fewest

cards. You then put this Villain in front of that player, “Preying” on them. 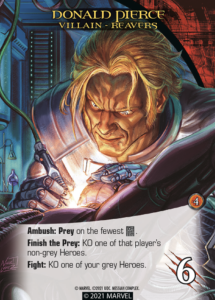 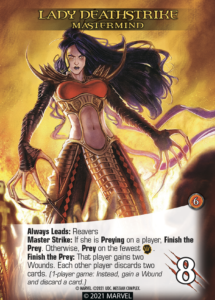 • Any player may still fight that Villain as normal. However, if no player defeats that Villain by the end of the preyed-on player’s turn, use that Villain’s “Finish the Prey” ability against that player. Then, that Villain enters the Sewers, ignoring its Ambush effects.
• Important: Do the “Finish the Prey” ability after that player draws their new hand at end of turn.
• After Lady Deathstrike Finishes the Prey, or if you fight her while she’s Preying on a player, return her to the Mastermind space. You still take one of her Tactics if you fight her while she’s Preying.
• Multiple enemies can prey on a player at once.

You can experience these cards and plenty more when the Legendary®: Messiah Complex expansion releases on January 19th.