Scarlet Witch suffers a psychotic break! Due to her immense powers she decimates the mutant population by whispering three simple words “No more mutants”. Mutants all over the globe lose their powers and return to the ranks of the humans. It’s a race against time in an effort to save mutantkind! The challenges ahead are formidable! Will you be able to overcome the odds? Or are mutants on the verge of extinction?

Returning to Legendary in Messiah Complex are fan favorites the X-Men, and also making a return will be X-Force, which first debuted back in 2013 with the Dark City expansion. But that’s not all! A brand new team of mutants joins the ranks – X-Factor Investigations! Will this rag-tag band of heroes be able to unravel the mysteries and discover the key to repairing the damage and restoring what was lost?

As usual, let’s begin with some returning keywords in Legendary®: Messiah Complex. Legendary has a lot of great keywords: Piercing Energy, Berserk, and Abomination just to name a few. But in Messiah Complex, perhaps one of my personal favorite keyword will be back – Investigate! There is absolutely no better way to try to control the nasty surprises that will come out of the Villain Deck than Investigate.

This keyword represents X-Factor Investigations looking into mysteries and searching for evidence and allies. It appeared in Legendary®: Marvel Noir and Dimensions.

• Some cards say things like “Investigate for a card that’s

• That means “Look at the top two cards of your deck. Reveal a card with a

from among them and draw it. Put the rest of those cards back on the top and/or bottom of your deck in any order.”

• Other cards let you investigate for cards with certain costs, teams, icons, or other traits! 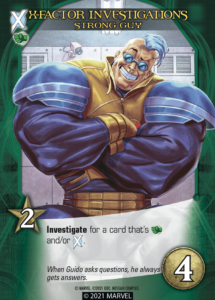 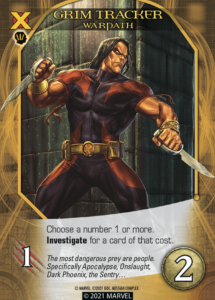 The world began in chaos. Out of this chaos immerged a certain order, a code… one of honor. This code has been passed down through the centuries. Knights once tested their valor in noble jousts. Gentlemen once took ten paces turned and fired to settle a grievance. It still exists to this day. It is reflected in our second returning keyword, Chivalrous Duel.

• To fight an enemy with “Chivalrous Duel,” all the

you spend must come from a single Hero Name.

Villain with Chivalrous Duel, you can spend 3

from Strong Guy cards and 1

Villain with Chivalrous Duel, but you can’t spend 2

from Strong Guy cards and 1

from anything that’s not a Hero card, so no Shards from other sets. You can use

from Hero Artifacts if they have the right Hero Name. 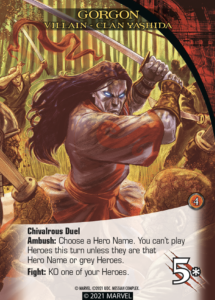 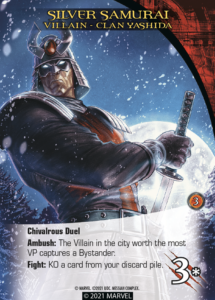