Now on to the new stuff! Legendary®: Messiah Complex has some really interesting new keywords. Some are tailor-made for certain Super Heroes. After all, how could we possibly hope to do any justice to a hero like Multiple Man without a keyword like Clone! That’s right, now some of your favorite Super Heroes can copy themselves!

Multiple Man and the Stepford Cuckoos are literal clones. M and her sisters can transform into copies of each other. All of these use the new Clone keyword, saying things like “

• Clone means: You may gain another copy of this card from the HQ. If there are none in the HQ, you may gain a copy from the Hero Deck and shuffle it.
• “Gain” means “put it into your discard pile.” 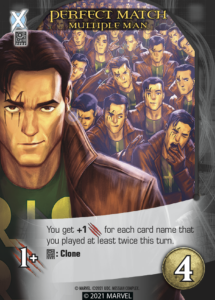 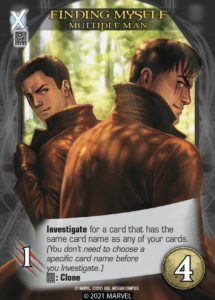 Some Heroes say: “When Recruited: Clone”. This means Use the Clone ability immediately when you recruit this Hero. Do this right after you put the recruited Hero in your discard pile, after you refill its HQ space.

• Use a “When Recruited” ability only when you recruit a Hero, not when an ability causes you to “gain” a Hero or “put it in your hand.” So the copy you gain from “When Recruited: Clone” won’t make you gain more copies.
• Some Heroes say things like “When Recruited —

: Clone.” Use this ability only if you have played a Hero this turn before recruiting this card. 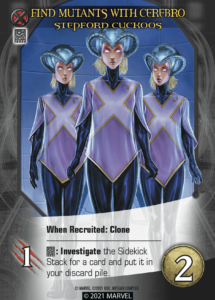 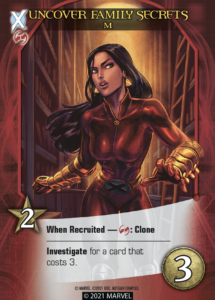 And what works for the “good guys” must work for the “bad guys”…right? What could be more frightening than swarms of villains that just keep multiplying! Relentlessly marching forward, seemingly unstoppable!

On a Villain, “Ambush: Clone” means: Search the Villain Deck for a copy of this Villain, and it enters the city, ignoring any further Clone effects. Shuffle that deck.

If you can’t find a Clone copy of a Villain (or Hero), just move on. 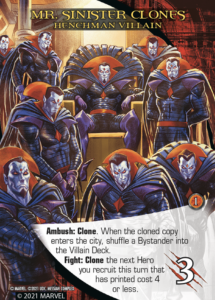 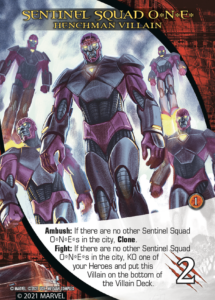 Cloning is cool isn’t it? It really adds something to Legendary. You should know by now that there have got to be more new keywords than just Cloning, though. Be on the lookout for our next preview blog to learn what else is in store for Legendary®: Messiah Complex!