Upper Deck’s Random Acts of Kindness program started during the company’s 25th Anniversary campaign in 2014 as a way to say thank you to those doing good in the hobby. With so much negativity online, Upper Deck wanted to recognize fans who help out other collectors and are positive advocates for the hobby on message boards, on social media and in their communities. During that initial campaign, Upper Deck thanked collectors and sometimes even celebrities with special packages to let them know how much the company appreciated them. 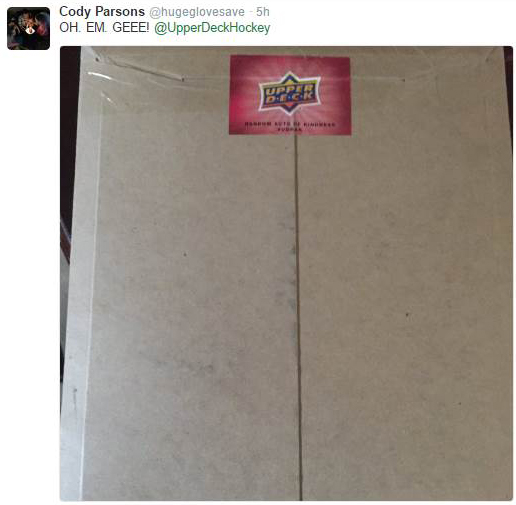 When an Upper Deck collector suddenly receives a package from Upper Deck with this label on the outside, they know something awesome is about to happen when they crack it open.

The program was so successful we have continued it and since 2014 we have delivered over 2,000 #UDRAK packages to fans around the world that are all customized to their collecting habits. The program has helped to change the way collectors engage with each other online for the better. Knowing that Upper Deck is always watching to what is happening online, many collectors are trying to be more helpful and generous on social media platforms and message boards. They are scoring as Upper Deck hears their story and surprises them with an unexpected mail day. If you are doing good out there to encourage the hobby of collecting, there’s a pretty darn good chance Upper Deck will hear your story and you’ll be added to the company’s list of #UDRAK recipients. Just check Twitter for the hashtag #UDRAK to see fans react to receiving these mail days. 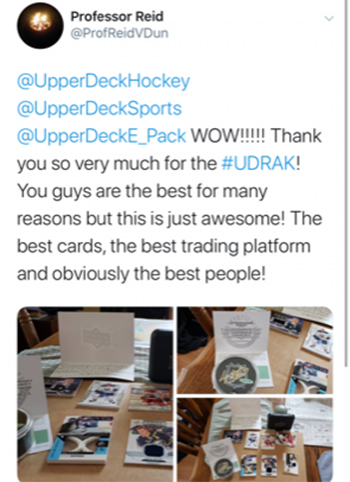 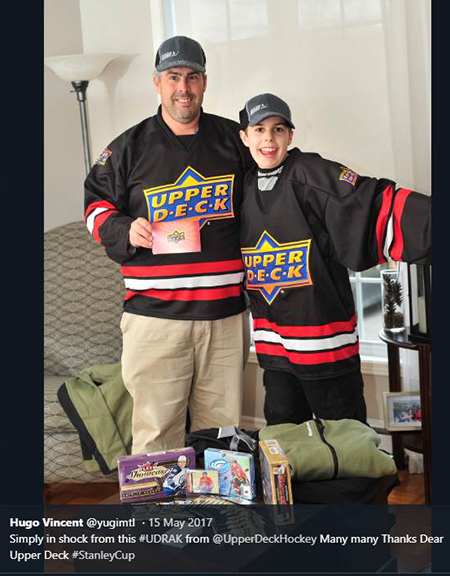 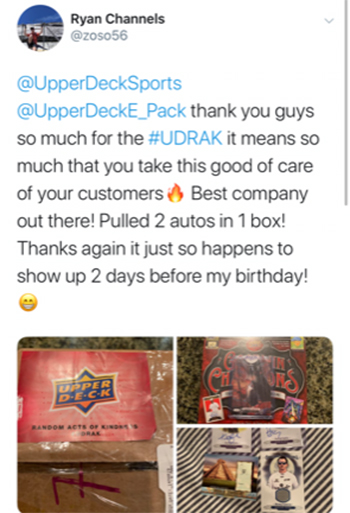 Fans who score an Upper Deck Random Acts of Kindness package know about it right away when they see the red sticker on the package. 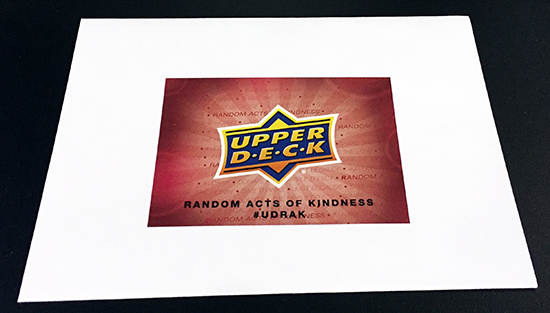 Finding this on a package you receive from Upper Deck means good things are inside. 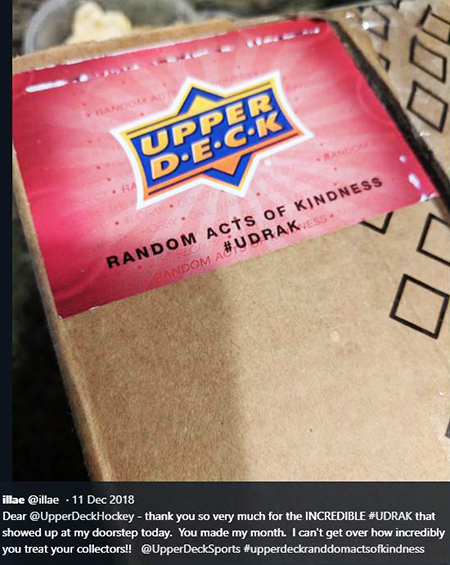 Fans get excited about their Upper Deck Random Acts of Kindness package before they even open them.

At holidays, Upper Deck likes to get creative with #UDRAK packages. Here’s a look at some fun packages collectors received at Valentine’s Day. 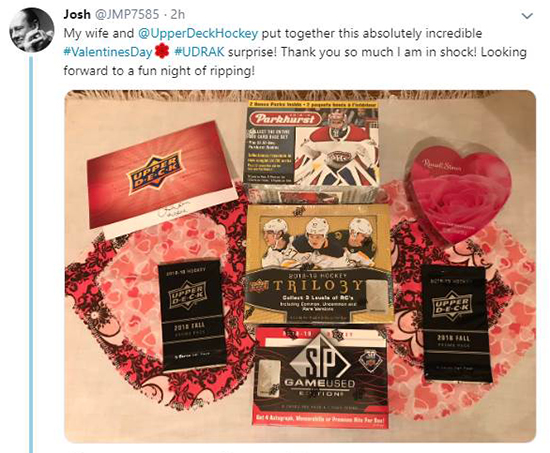 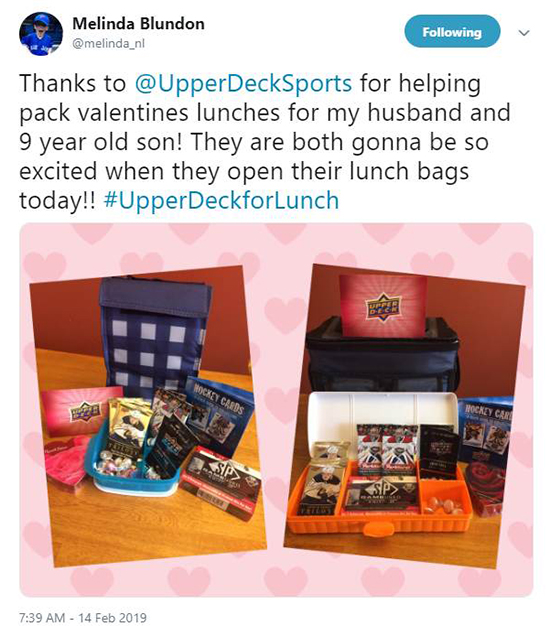 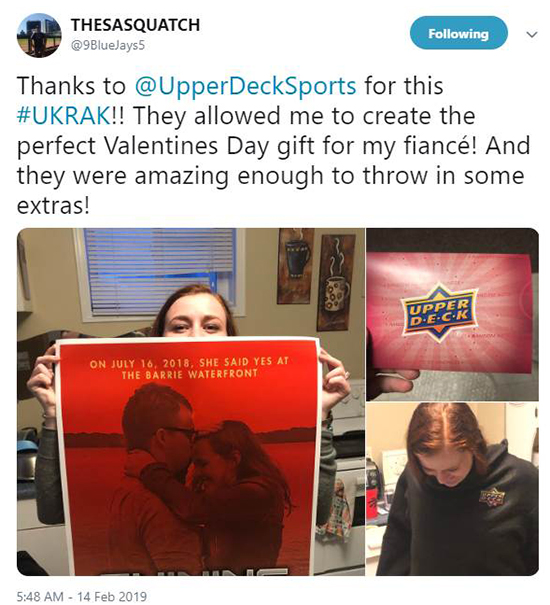 For Father’s Day we surprised some dads by putting them in the background of iconic Upper Deck Young Guns rookie cards and sending them a giant poster! 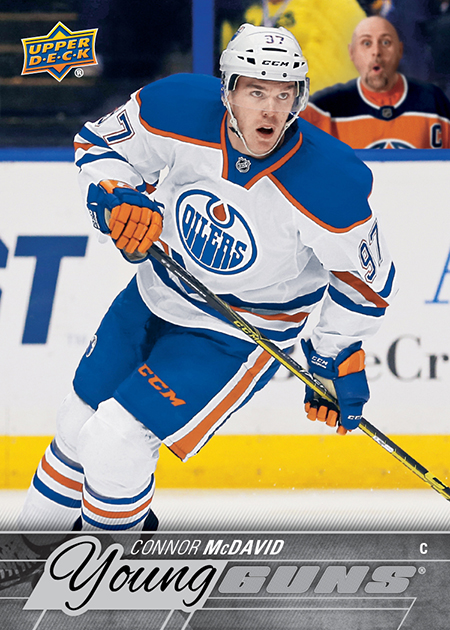 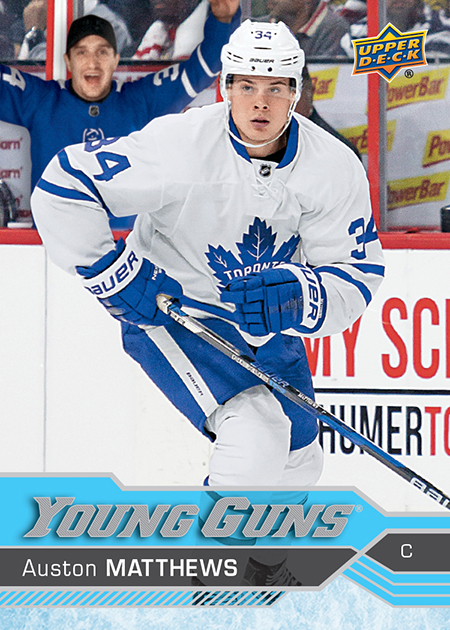 Upper Deck also watches how fans engage with each other on the company’s e-Pack platform, especially on the message boards. Great advocates on e-Pack who are very engaged and help others have a good shot at finding a surprise mail day coming their way from Upper Deck. 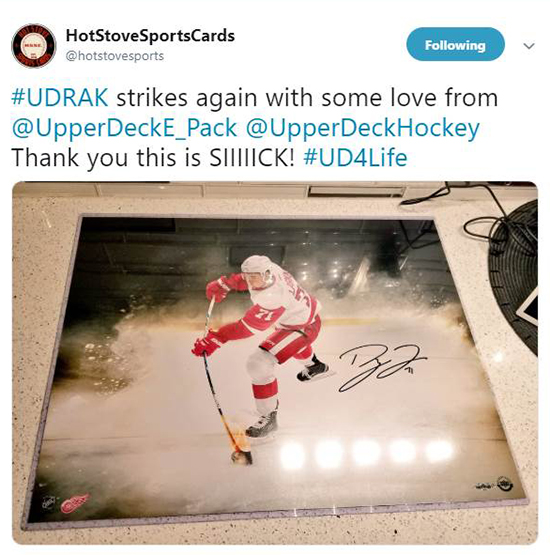 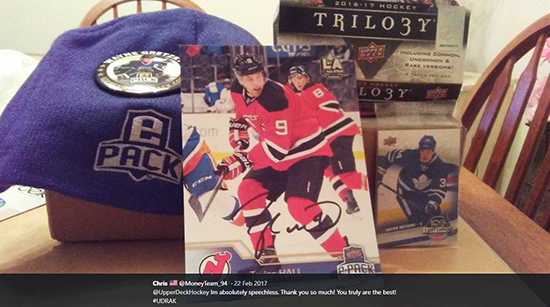 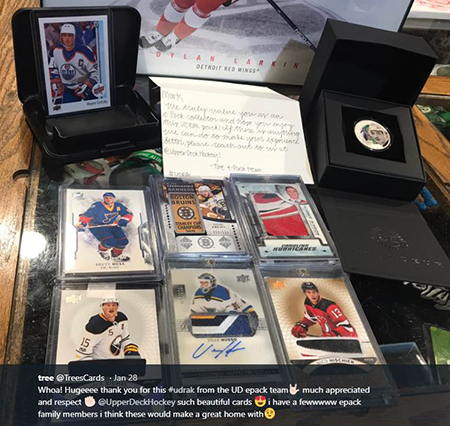 Collectors love getting a mail day they expect, but when they are surprised with these special packages, they go wild. At Upper Deck we are happy to give back to loyal fans doing good in the hobby. There is one rule with #UDRAK packages: YOU CANNOT ASK FOR THEM FOR YOURSELF. Upper Deck works to identify deserving fans and surprises them from there, but you cannot ask for these special mail days. Look for more to come in the future as we work to remain the collector’s choice.


I have had to deal with illnesses and financial difficulties for almost four years. I have raised money by selling off most of my trading cards. One good thing though has been I have helped my 9 year old nephews get into the hobby by giving them some of the cards I haven’t sold.

Thank you for helping others, even if you can’t help me. I hope the help you have given continues the love of sports and collecting for generations to come.


I received an RAK package today in the mail and It was amazing. My son was so happy to see the unopened boxes of cards from upperdeck. Just so happens it was a snow day and we enjoyed some box breaks during the day!! Upperdeck ROCKS!!!


How do they get your address


#UDRAK is a great way to give back to the card community. There are so many collectors out there that can’t even dream about buying a box of mid or upper range product, and can only buy a few packs at a time. This program gives a chance for those low tier collectors the experience the thrill of busting a box of some nice products. Well done Upper Deck!


I would like to nominate @CareyCollector from Twitter…. the selfless acts I’ve seen participate in are unreal. He never cares about a return, so I figure it’s his time!! After selling most of his collection to help pay medical bills, I’m sure it’s hard to start over. 2 FT jobs is hard to juggle I’m sure. If it weren’t for his hobby family help keeping him afloat & being able to watch Conor McDavid kick butt, I don’t know if he’d function!!


With so much negativity on line its nice to see a company giving back and spreading cheer. I try to send a RAK out every week to someone who least expects it. It brightens people’s day and keeps the hobby fun and enjoyable.


I want to nominate my dad he has and will always do everything for me and we bond over hockey recently during co vid he has lost his job and he deserves to get something happy out of this year ! He has a bunch of cards when I was growing up and than later he had to sell some !


Thanks so much for the #UDRAK package that showed up today. Was super awesome and will look amazing in the collectibles room! Thanks for a great product and for all that ya do for the sports community.


Hello Upper Deck this is Johnny From CARDMAN’S BOX BREAKS, I am a small newly started Breaker hoping to get to higher levels in the hobby and keep it alive for the younger generations and expand, I started my own group I have 140 people so far and keeps growing daily I do lots of giveaways and all of my breaks are skunk proof so everyone always gets something for joining always I also love hearing the feedback from people especially the parents seeing joy on their kids faces and over the years Upper deck has helped me by inspiring me to do random acts of kindness which is amazing and hope it continues for years to come thanks for the inspiration cheers


This is awesome Upper Deck.