Well, we’re back with another preview of Vs System® 2PCG®: The Predator Battles and although this set will be available very soon at Gen Con, not everyone will be there and even a little preview is good, right? Today, we discuss the real stars of the show – after all, the movie isn’t called Prey.

First up, we have a character from Predators, the surveillance Super Predator, Falconer. 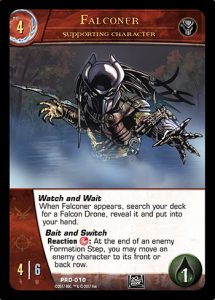 He’s a patient, sneaky kind of Predator, who waits until his Prey is exactly in the right place. And he always has his trusty drone! 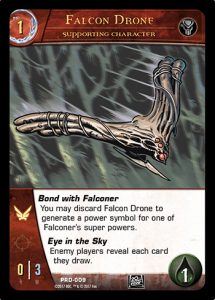 Instead of paying a

for the Falconer’s Bait and Switch, you can discard this card instead. But wouldn’t it be cool if there were a Falconer Main Character as well, so this card would have even more utility? And you know what, it would also be cool if this wasn’t the only Bond in the set!

Of course, you can also play the drone and get some info that way. Very versatile! What’s next? 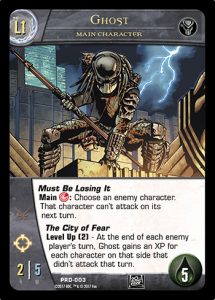 Whoa, is that the true star of Predator 2, Ghost, aka City Hunter? (Well not AKA in the game, but you know what I mean.) Ghost is, like ghosts are, pretty hard to hit. And even more so on his Level 2… 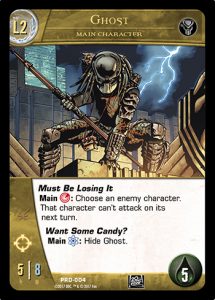 Ghost answers the age-old question “Will Invisibility be the only way to Hide characters in the game?” with a resounding “No!”

His Supporting Character version is a little more…aggressive. 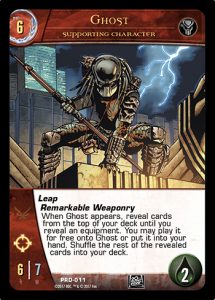 You still can only play the equipment on him if it’s legal – meaning you must have a face-up character with the matching team affiliation on your side. So he could even conceivably equip a free Co[redacted].

Not a lot of stuff from Predator, you say? Where is the Jungle Hunter, you say? Voila! (That’s Yautja for “Right here, you ugly [censored]!” 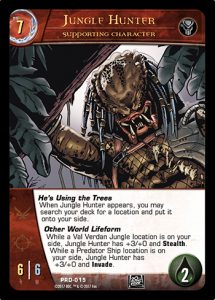 Using the trees, indeed. And the Academies, the Fortresses, the Earth itself, Space infinite, etc. 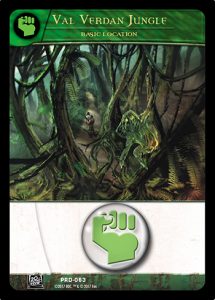 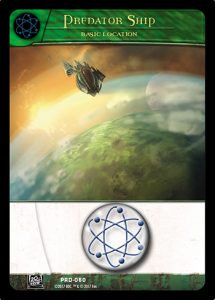 But let’s get to what Predators are best known for – a weird Plot Twist! 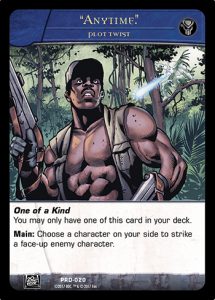 The character you choose doesn’t get to strike back. Sorry. And this doesn’t count as a combat. Combat is a little more…two-sided. The Predators have four One of a Kind Plot Twists. You’ll have to wait a bit to see the others.

Well, thanks for reading! (You didn’t read this, but I like to hope.) Here’s some equipment! 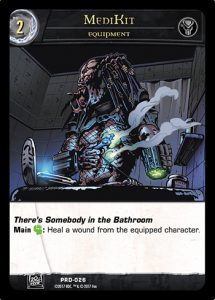 The name of this power makes me laugh every time. “Herb, wake up! There’s somebody in the bathroom.” Little did the brave old lady Ruth Albright know. (Yes, she has a first and last name.)

There’s another, very important piece of gear from Predator 2. Harrigan uses it himself to great effect. 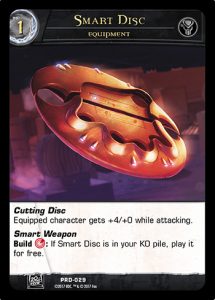 And with that, we hope we whetted your whistle for the Vs System® 2PCG®: The Predator Battles! We hope to see you battling out there!

Can you find him before he finds you?

I hope you enjoyed this sneak peek od Vs System® 2PCG®: The Predator Battles. Pre-orders for this set are available now at your local gaming store. This new set is scheduled to hit stores in October.


These cards are so slick.
I love the detail in them.